I know I keep opening new threads, my aim is creating a sort of Encyclopaedia of Medieval and Roman architecture. I will post in this thread the various buildings I model - some for an Archaeology project I am following - and others just for personal interest and research. Since today I had to prepare a presentation on Roman Tabernas (rooms which had mainly a commercial use - located on the ground floor of houses and public buildings) for my Archaeology class at uni, I decided to make one with Blender. The building will then appear in a project I am following in which, with a group of Italian archaeologists, we are rendering an entire Roman town in northern Italy. Since a book and dvd will be published next year I can’t post any renders of the project, though I can post some of the buildings made by very self.
Here’s a ‘Taberna Unguentaria’ essentially a shop which retailed ointments and medicines. The overhanging floor above the taberna could either be the shopkeeper’s house or a storehouse for the goods - since the shop would be part of a bigger building. 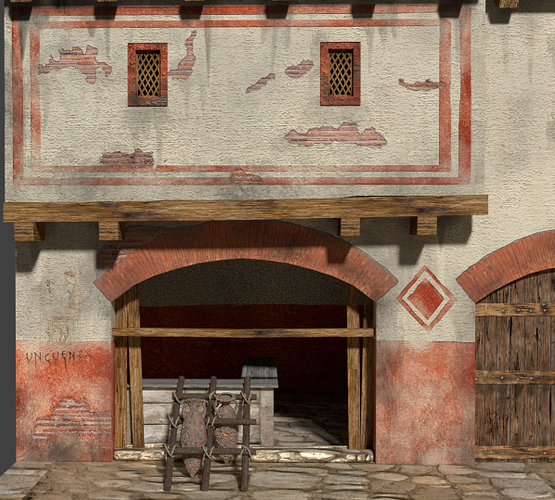 are you going to use cycles

Thanks for your comment, the arch was created in Photoshop along with all the textures you see in this render. I basically disposed the bricks along the arch and then cut their shape. Some adjustments are still needed but overall it already gives the idea. I am already using cycles, though I did not apply any modifiers/nodes (just using sun light). 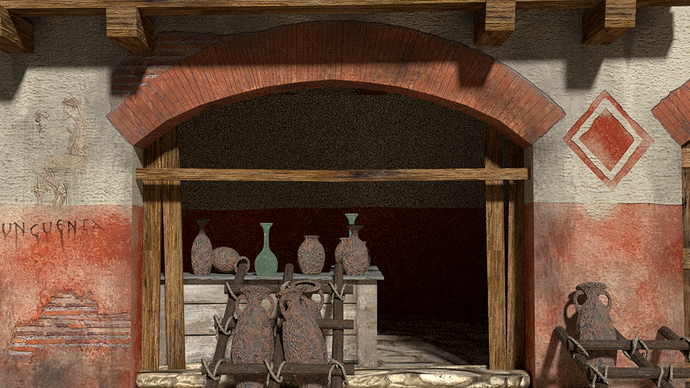 but are you going to do 3D models on only use image made with photoshop then apply to a plane in blender ?
any idea about the real dimensions for the tiles ?

Nice improvements from the first render. The amphorae however do look a bit 2 dimensional. I’m not quite sure why that is, but I suspect it has something to do with the texture as much of the physical structure his hidden by the texture.
The amphora in the middle in the back looks clearly better, as you can see into it making out a clearly visible dividing between inside and outside.

@Ricky: thanks for your comment. The classic Roman arch is indeed circular but more elliptical shapes existed too, and were used for openings in buildings, mainly, while the round arch would be used for vaults and as support (i.e. Aqueducts). This is an example of an elliptical arch.http://www.google.co.uk/imgres?imgurl=http://image.yaymicro.com/rz_1210x1210/1/5d6/ancient-roman-brick-arch-15d69e0.jpg&imgrefurl=http://yaymicro.com/stock-image/ancient-roman-brick-arch/5661366&h=839&w=1210&sz=379&tbnid=OvS2js5cgDfDEM:&tbnh=90&tbnw=130&prev=/search%3Fq%3Droman%2Bbrick%2Barch%26tbm%3Disch%26tbo%3Du&zoom=1&q=roman+brick+arch&usg=__VDp3OjXh8ZANlY4-m5MD9AibT0Y=&docid=Fw4Oqo2_llcDTM&hl=en&sa=X&ei=FEkWUZOFJY-U0QXWw4HYCA&sqi=2&ved=0CEIQ9QEwAw&dur=521

@Hotzst: Thanks, you’re right, the amphorae look somehow wrong. Perhaps it’s the lighting and the position of the camera, however I shall elaborate them and add more objects to the scene (anyway it served its purpose). I have deleted the other thread (low poly medieval house) - will post the results here not to make confusion! And I have tried the solidify modifier, but it simply creates another plane… I guess it’s because of the alpha map. 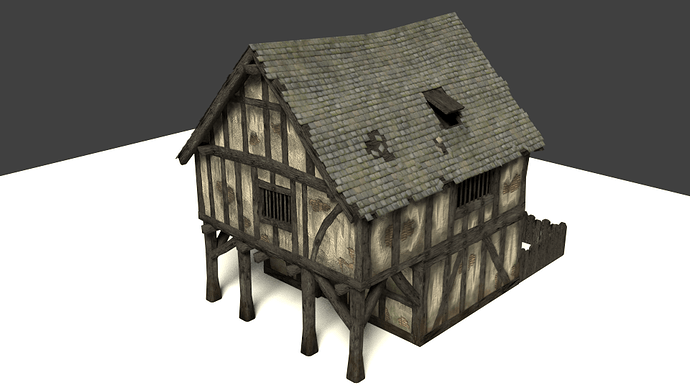 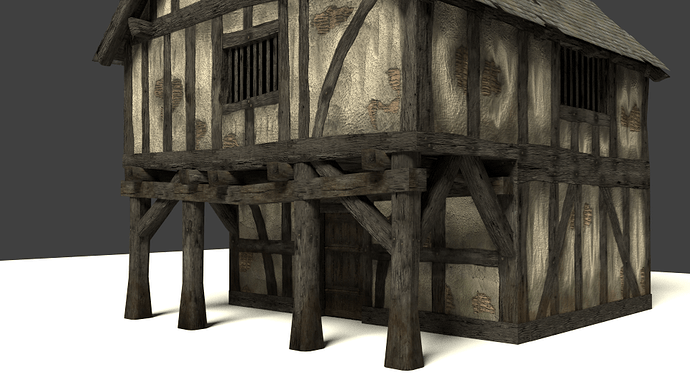 The walls look really great. Concerning the shingles on the roof I think it is an issue of perspective. As you said it is a low poly building. If you would require close-ups of the roof, I think it would be noticeable, but as it is, it looks ok to me. Only the place where the shingles are missing is looking a bit strange, like there is a wooden roof underneath. Is that who it was done?

Nice, but no chimney! In Tudor times, they’d often build the chimney first, and then the rest of the house around the chimney stack. It worked structurally, and it kept the whole house warm when it was done.

I look forward to seeing a thousand houses together!

Thanks guys!!! @Hotzst: you’re right, from the distance the thickness of the tiles should not be noticed. @Sweasel: you’re right, but Tudor times are usually the 1500s. This house dates back to the 13th/14th century, when chimneys were still expensive and featured only in the houses of the well-off. All the others had hearths inside and let the smoke out through holes in the roof - for this reason thatched roofs were banned from many English cities, in order to avoid easy blazes. If this were to be a Tudor house, it would also have glazed windows, since by the mid 1400s glass became less expensive and was adopted by the majority of the population. Thanks for the interest though! I might model a Tudor house soon. And yeah, I am working on a possible scene!

You’re right, you’re right. A very interesting house from the architectural transition is the 14th C Alfriston Clergy House (the first property bought by Britain’s National Trust - they paid £10 for it in falling down condition). It looks distinctly Tudor, but it had the fire pit in the center, like a Viking longhouse. It has a chimney, but it’s on the end, in aid of the kitchen…might even be a later addition. Anyway, I’m sure you’d enjoy a Google images search of it, particularly if you can find images of the interior.

My house is 16th C – it has a central chimney, but no mantelpiece. Rather, there’s a big beam over the inglenook, but they didn’t think to make it stick out so I could put junk on it. Modern technology, eh?

Thanks for the hint! Will google the images of the house. And that is amazing! Is it timber-framed? I love those houses (as you may tell from my models haha). Since I have started to study medieval history I look at things in a different way and stare amused at things such as old beams and arches.

Yes, it’s timber framed. A lot of stuff has been done to this poor old house over the years, though, so there’s tile on the outside now instead of the lovely Tudor beams. They show on the inside. A couple of years ago, we had a man in to look at the wood because we heard deathwatch beetle ticking away (not a serious problem, happy to say). I said to him something like “these beams are at least four or five hundred years old.” And he said, “oh, no – some of them are probably a thousand years old. They’ll have come out of an old barn or a ship or an ox cart, maybe used twice over before they were used to build this house.” It shows, too…they’re all full of mysterious pegs and holes and nails that no longer make sense.

I’m American born, so that just blows me away. I was playing Skyrim last year, the part where you buy your first house, and I’m looking around my Skyrim house thinking, “wow, that’s so cool!” and then I looked up from the computer into the fireplace of this house and I was, like, “Oh. Right.”

Anyway, you’re capturing the flavor of it very well.

that is amazing mate. Also incredible how a five hundred years old house is still up and safe, especially with timber so old. The amazing thing about the middle ages is that although people did ignore laws of physics, they managed to build incredible things which still stand today, and that does not only apply to magnificent cathedrals and castles - but to houses were the common folk lived everyday life. Where is that you live in England? I’m based in London and unfortunately very little remains. There are some nice Tudor timber-framed houses in Holborn, quite close to where I live, but those are the oldest surviving in the area.

You can thank the Great Fire for that. And Hitler. Did you know he deliberately targeted quaint places for bombing runs, using a guidebook? It’s why there’s so little left of Canterbury except (miraculously) the Cathedral.

We’re down on the south coast, out in the country, not too far from Battle. Awesome to wander around the shell of Battle Abbey. Out away from the cities, an amazing amount of ancient Britain is left. You know, five hundred year old oak is as hard as iron. Amazing stuff. No wonder it’s still here.

Oh that is near Hastings, isn’t it? Does it have an overhanging upper-storey? I found out that overhanging storeys were a common feature in medieval housing, not only in northern Europe but also in the south. Shall post the updates! My ideas was to model a street full of townhouses seen from an archway.

today we design with min size function of the load!
in middle ages there was not really any calculations to determine the min size required!

Yes, near Hastings. We were there yesterday. You know, you could make a pretty awesome model of Hastings by building one Victorian townhouse and duplicating it scores of times going up the hill. That’s just what Hastings looks like from Old Town.

No overhanging storey on ours, which would be cool. I think that was a town thing. We’re out in the country. We have a very, very steeply pitched roof, which was designed to collect rainwater.

Very much overkill, Ricky. On the other hand, my house is still habitable after 400 years, so it’s hard to argue.