Not sure which is the right term.

For the record, I am learning a LOT in this process.

Now I’ve noticed others have done this. I haven’t paid close attention to
their detail.

I’ve looked on YouTube for either Blender or other 3d modeling tool tutorials
on this figuring the basic concepts are essentially the same from one tool to
the next.

I am finding that what I think ought not be that hard is just not always the
case and subsequently have a fuller appreciation for the attention to detail as
well as the granularity of some of the tools and processes of 3d modeling.

just to see what difference they make

So, I’ve kind of got the basics of putting a traffic cone together down

My problem is in the detail of the rounding, specifically at the top of the cone,
the base of the cone (where it merges with the base - if that makes sense) as
well as the base where it’s rounded not just at the corners but, on the long
edges as well - comparable to this (Step 9 - Chamfer): 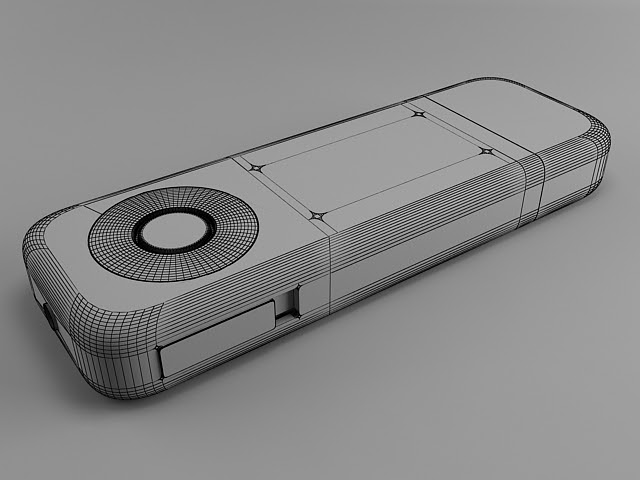 Part 1 - 3D Modeling the Mp3 Player Hi guys. Finally i finished the first part of this 3d modeling tutorial. Today i will show you how t...

Applying the bevel, as is often demonstrated with a (dice) cube the edges
are pronounced when rounded. Flattening a cube to a more planar shape
reduces that effect.

And so, that’s when I started digging into the possibilities.

Now, what I do NOT know about Blender is far more than I do (see any
of my previous posts for clear evidence of that).

What are the best ways to achieve the rounding in the areas I’ve noted above:

If it helps, conceptually, I’m visualizing the kind of rounding that comes from woodworking
and the use of a router or the kind of bevel you’d see on a wooden table top or a plastic
smartphone case or a bar of soap or a baseboard (although that might be considerably easier
as its essentially an elongated cube in which one edge has been beveled).

You did not tell us how you want to use this model later on: In a game? An animation? For a close-up beauty shot?
In a way this basic question dictates the preferable way of modeling. If this was e. g. for a high quality beauty shot and the polycount did not matter, I personally would prefer to use a sub-d (subdivision surface) model, as this will create perfect roundings and smooth fillets for free:

a)
Add the cone primitive and adapt the shape to your liking. Set “Base Fill type” to “Nothing” - this will spare you to delete those end caps later. Set “Vertices” to 16.

b)
Add a cube primitive and position/shape that to your liking. Loop cut (Ctrl-R) the cube in x and y direction 5 times (mouse wheel up to change the number of cuts).

e)
Leave Edit Mode and apply a Subsurf modifier with a level of 2 onto the mesh (modifiers panel or Ctrl-2).

f)
Now back to Edit Mode and add loop cuts to selectively sharpen certain areas of the mesh. The closer two edge loops are together, the sharper the edge will become. 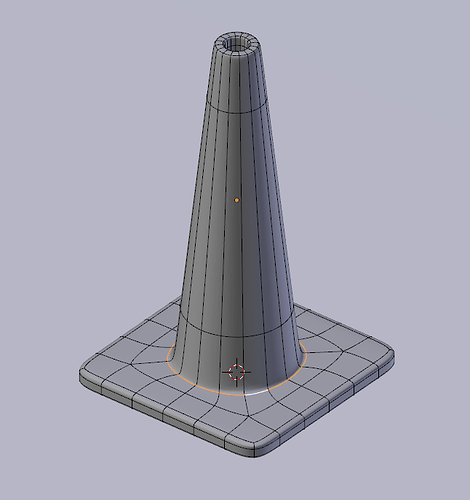 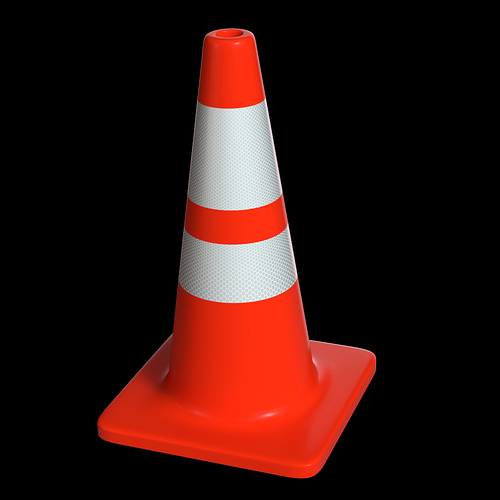 A small final remark:
Stay away from the Boolean modifier whenever possible. Booleans are great in NURBS-based CAD applications, but are IMHO most of the time a lazy man’s crutch in polygonal modeling apps like Blender. They will almost always create messy geometry and shading errors galore that need manual cleanup later. Are there situations in which booleans in Blender make your life easier? Of course, but especially in “simple” examples like this I think a manual solution will always produce superior results.

Thanks for the detailed response.

Nope, nothing more than just my effort to learn Blender.

I looked at a gas station stand and am attempting to model
the components of the stand as an exercise in learning Blender.

Not an art school major. No artistic background or expertise.

LATE in the game to this (59 years old). So, I’m just looking to
wrap my mind around it. Learn something new.

Later, (I’m at work now). I’ll post what I have done. Compared
to what has been shown here, it’s embarrassingly amateur. But,
it’ll answer your initial question.

Thanks for the tips on boolean as well.

Thank you for that.

Below is the example I promised.

I created the base in Erain’s Swift3D and exported it to 3DS format.

Swift3D has a great, simple set of tools for mapping out a design
on a grid layout. Just seemed easier than trying to figure it out in
Blender.

I’m closing in on my forties, so, not exactly a spring chicken, either…

The sub-d technique I used leads to rather high polygon counts in the mesh - therefore my question about the models intended use.

If anything is unclear about my description, I can make a small video to show the process if need be.

Swift3D is some kind of NURBS modeler, no?
The problem with meshes imported from those applications is often the geometry, the topology of the mesh: NURBS modelers define objects by mathematical parameters and not by pushing around polygons, vertices and edges. Those models are only translated into polygonal geometry on export and often in a rather crude way.

It’s perfectly OK to look at those imported models and mostly they will render fine, but you rather not try to work further on them without thorough cleaning up - if that’s at all possible. In your case the traffic cone’s base is a typical example for that: N-gons (polygons with more than 4 vertices), triangles (polygons with just 3 vertices) and so on. Polygonal modelers like Blender work in general best with quads (= polygons with 4 vertices), therefore the geometry as it is might be cumbersome to edit to your liking and any cleanup might require more work than just redoing it in Blender…

Alright, step D confuses me. Perhaps a video would help to clarify that process.

Re: Swift3D, I can take another look at mesh modeling. Now that you’ve seen the shape,
what would you recommend as a starting point in Blender?

I might add, apparently there’s a right and wrong way to add a cone (unless it’s a bug
in Blender).

If I add the cone the wrong way, it doesn’t show up in the outline.

If I add the cone in object mode, it shows up in the outline.

A bit of a problem when it comes to selecting, locating the two and then joining them.

The video is uploading now.
Might take a while until you can watch it, though - anyway, here is the link: Video.
It’s about 7 minutes long and shows two ways of creating that traffic cone: First a low poly one and then the sub-d method I described in my earlier post.

It’s rather late here (almost 2 o’clock) in Germany and I didn’t want to shout narration through the house… But I hope the text captions in the video speak for themselves.

ETA for the video in my Dropbox is 35 minutes from… Now!

REALLY GREAT video! Haven’t played with it yet, but, I’m SOOOOO looking forward to.

That video will save me HOURS of fuddling around.

One small detail. Not really apparent from the cone pic and that’s that traffic cones tend
to also be hollow at the bottom. The cone extends down through the base. So from underneath
you can pick it up and see out either end.

I gather that’s why in some tutorials I’ve seen use of the boolean because it allows a cutout
of the cone through the base (if that makes sense). Other than that.

Will your traffic cone ever be seen from the bottom or from such an extreme top view that you can see inside it? If not, why bother to model the “inside” or the hollow base?

Anyway, modeling that by hand is IMHO still easier than using that messy Boolean modifier: For both methods just repeat the basic editing steps from the top faces of the cube part on its bottom faces, extrude the rudimentary inside from the top further down to the bottom and connect/bridge. Voila! 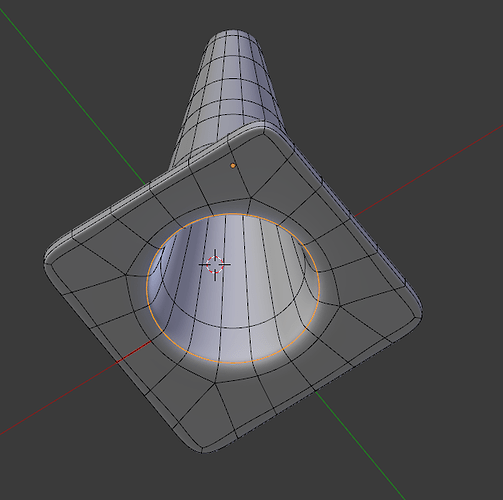 As a general matter, a hole in the bottom not absolutely essential. As a matter of accuracy and attention
to detail, worth the extra effort.

Who knows, somebody somewhere, like me, not necessarily me, will point that out.

You have the skills and the versatility to go either way. The sign of someone who has truly mastered the
method(s).

Literally, it’s like being in the presence of, if not a gourmet chef, certainly one well versed enough to
know not only the differences between foods and spices, but also the finer point of what to use, when
and how.

Just what little I’ve experienced of your abilities reaffirms that for me. Your generosity in sharing your
talent is MUCH appreciated.

I’ll post my results based on your methods later this weekend. What’s the point of just knowing?

Are you trying to select an edge loop? Try alt-right click.

Sorry, not a Linux guy, but I guess you can change Mint’s system settings accordingly somehow…?

Hopefully there’s a difference there (should be).

And I’ll look into Blender shortcuts vs Linux to see what else I might try.

95% of the way there minus the Alt-Left Click trick.