So first the history. Several years ago I was a club owner in SecondLife. The club was retro 50’s, and got pretty busy. It’s gone from there now (though the club itself is alive and well on OSGrid).

One day I took to C4D to recreate the club using less cartoony graphics than SL could deliver, and with more realistic lighting. It took three months, but I got there. This was maybe 5 - 6 years ago.

Fast forward to today, and I decided to give it a go in Blender. I haven’t re-modelled, but simply exported the C4D model as obj and imported that. Textures and lighting, however, are where I’m going in BL. The attached is one of my early WIPs, with the major parts textured. Using PBR node setups, the light is provided by an emission shader on the overhead and picture lights, and a couple of spotlights where, well, where the stage spots are.

The model had some horrible issues with randomly flipped normals, which I had to fix manually. Obviously, I still have a way to go, and I haven’t started on texturing what is out of view on the pic (bar area, outside etc.) but I’ll get there. It was always a big project and so will take time (the bare clay model file was 212Mb). I’ve had to shrink to about 1/100th of the imported size to get it to around real world scale.

I expect progress to be slow, but I’ll update when I have an update worth sharing. 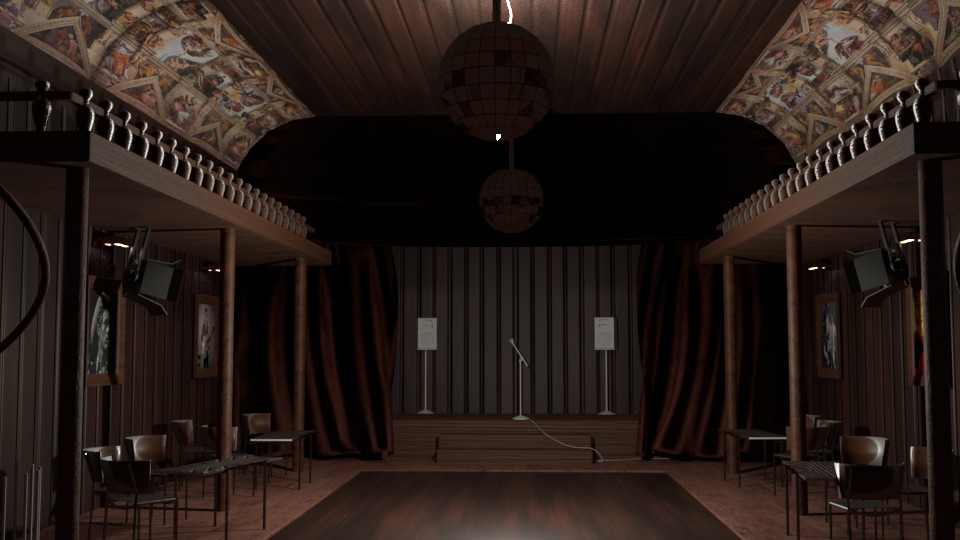 Since I’m holiday from work, I decided to do some more. I still need to re-work the UVs on the balconies and the rail pillars on the balconies. Added some volumetric lighting on the spots and adjusted the overall lighting. 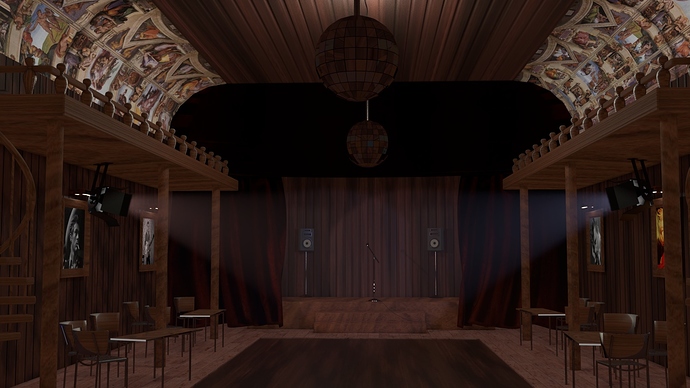 And with fixed UVs. I’d like to brighten up the reflection on the glitterballs, not sure how. 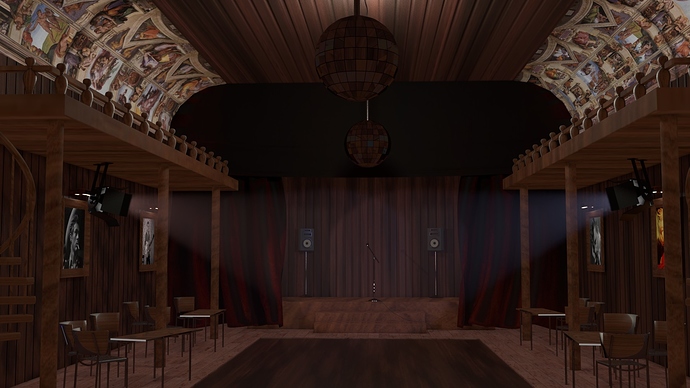 Started on the bar area. 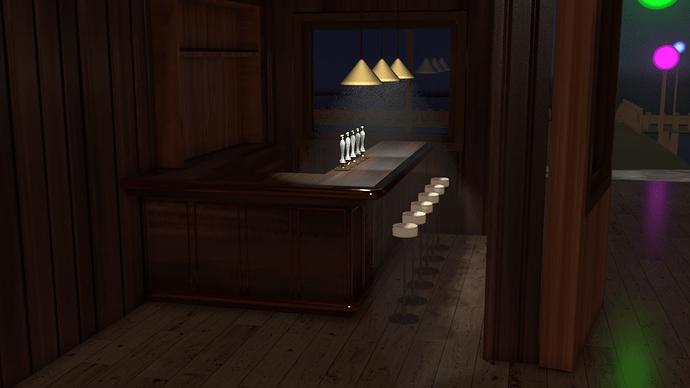 Nice model!
Are you rendering with Cycle or Blender internal engine?

For me, one thing making this not realistic is the lighting.
There is a kind of ambiant light illuminating the whole scene in an homogeneous way making it unreal.
We don’t see from where this light is coming.
I would expect more contrast between area enligthened by a spot and darker area.

On the materials, there is a lack of “volume” (bumps, space between tiles of the floor…) and difference of reflection (glossy).

About the glitterball, I would say that, as in real life, you need to put spots on it. Could you maybe show the setup for the material/texture of it, so we can help you?

But, nice job on the modeling!

Thanks for the comments. It’s Cycles render engine, and there’s an overhead globe light between the glitterballs which is where the ambient light is coming from. It’s actually hidden behind the closest glitterball from the camera angle.

It may not be obvious from the grain in this image, rendered from a different angle to show the overhead light, but I’ve had to re-work nearly all the textures. I had a rather important unconnected node in my dialectric shader which broke them all. It should be clearer in the next higher quality render. 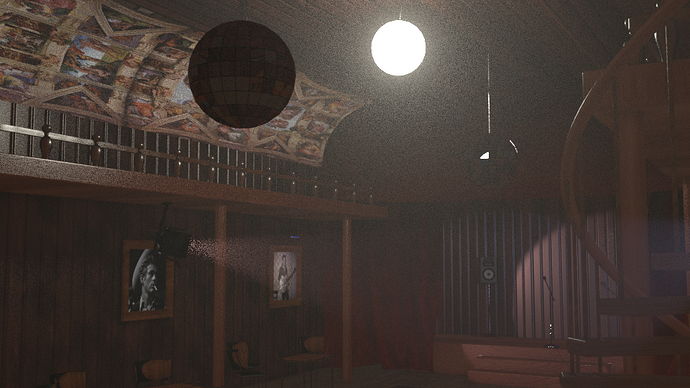 Latest updates. Still working on it. 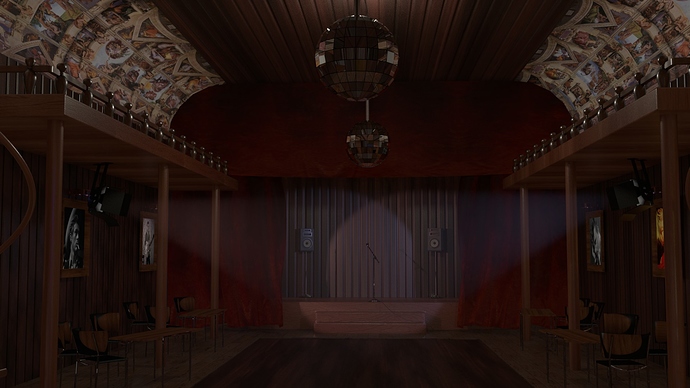 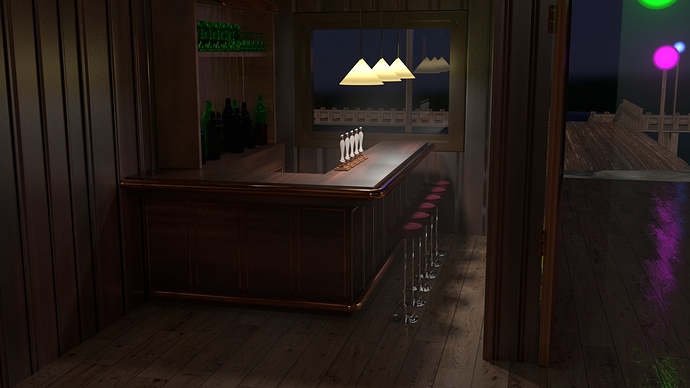 Nice, it’s getting better.
I see you found the correct material for the glitterball.
I see also that you change the one of the floor.
I like the bar, it’s getting realistic.

I haven’t actually changed the glitter balls, just lighting and AO. Since I discovered and fixed my dielectric shader I took the opportunity to create and use new textures. There is still an issue with the glasses (top shelf behind the bar). I used the same on the bottles and forgot to make them single user, hence the green. Fixed for the next render. 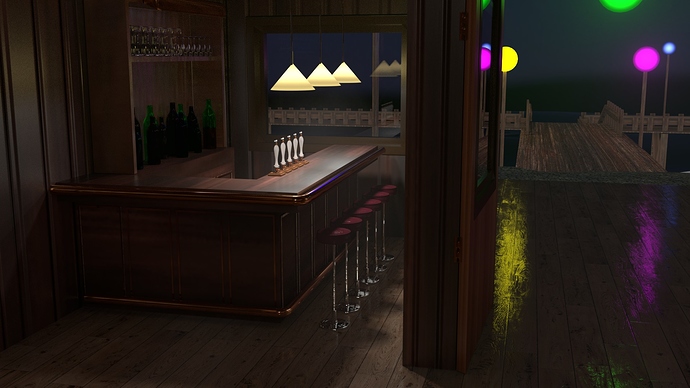 I get so little time to work on this, and when I do I get distracted doing other stuff, but here’s an update from the stage cam, with re-worked curtains. 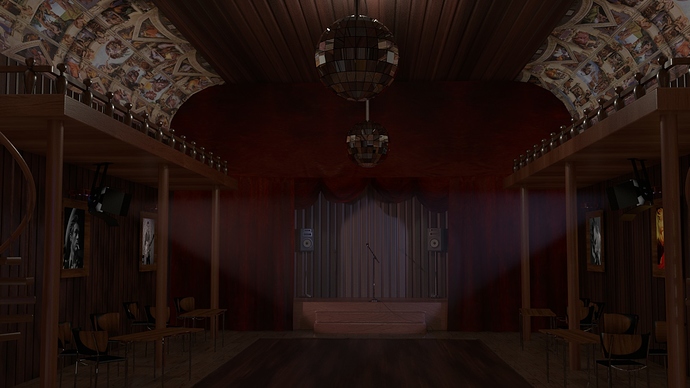 I think you have way too many bar stools and proportionally they look pretty small. Like if you compare them with the bottles resting in the bar shelf either theyt look way too small or the bottles are too large.

Your right, the bottles are too big. As for the number of stools, they will surround this end of the bar (eventually)