Been creating some props for a larger scene im planning on doing, rendered with Yafray using HDRI. col, mir, and normal maps on the cans. Thanks for any C&C greatly appreciated. 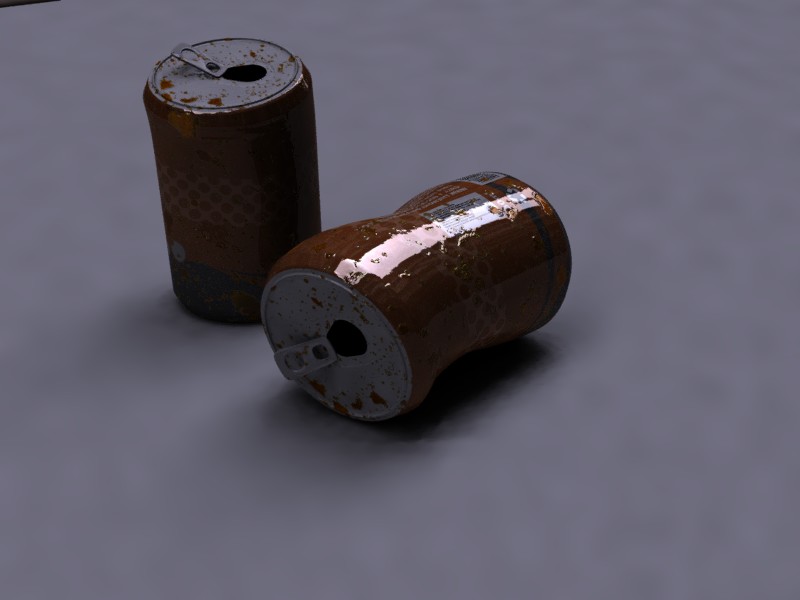 modern drink cans (those with pull-tabs) use aluminum, which doesn’t rust.

you can use the same texture as the rust, for a specular map… that way only the peaks of the rust recive the specular mapping.

The way it is now looks like it is covered in snot or slime.

Great modeling, and a nice rust texture too

sorry, should have put corroding, just a technicality really though

Looks pretty cool, but i think that they look a little to shiny.

rusty things aren’t shiny if I recall correctly - so you may want to down it down a bit. Looks like the start of an interesting scene though.

sorry, should have put corroding, just a technicality really though

Nope. “Rust” is specifically iron oxide and has characteristic material qualities including surface texture and color. Aluminum will never “rust” because it isn’t iron, and doesn’t corrode with any easily visible result.

A little research and I learned that steel is still used overseas for some beverage cans, while in America they’re all aluminum. Steel does rust.

ive sorted that out cheers, i was trying to limit the reflections to the non-corroding areas using maps, but it didnt work too well.

Its all just too dark to see much.

I agree, i think it looks kinda slimy or wet right now. I’d definately tone down the specularity.

Mental note.
Post in the WIP forum first before posting in Finished Projects.

the scale seems a little off on the model itself, especially on the top rim. and the way that the right can is deformed doesn’t look quite right. finally, increase the quality of the gi settings, the noise is a bit too noticeable. other than those few things, it’s a good start

Just click on the “Spec” button withthe rust texture. it will look great

ermm in europe they’re 99% aluminium, and they dont rust like that…
and i mean percentage of total cans, not composition of the can.

more likely to rust is food “tins” like pineapple and peas and carrots etc.

Hi, thanks for the suggestions, i think covered most of them. Rendered with higher quality GI and higher rez HDR image, spec maps applyed and reflections toned down a lot.

As for the corrosion, the final image will be set 30 years in the future, and the cans will be in a puddle with lots of impurities, i hope which would result in corrosion. im not really that sure. 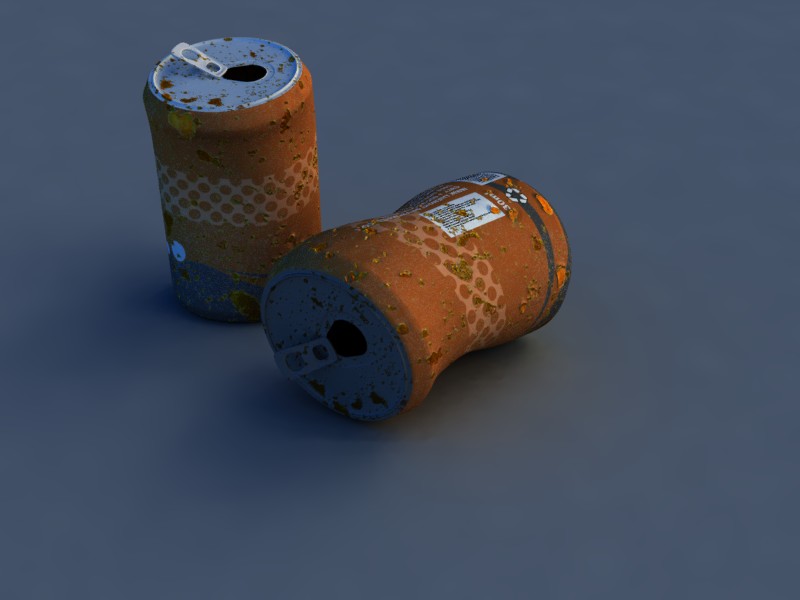 Not if they are made up of aluminium as mentioned earlier.
But who cares

say it is artistic license and give us a nice scene

It’s been a while since i did my materials course for my mechnical engineering degree but if i remember correctly aluminimum will not rust in general because it forms a protective oxide layer, but in areas where the is a lot of salt in the air, costal areas, or where salt so used on roads in winter it can corrode and pit but whether it looks like rust from a something made of iron i have no clue do some research.

Just drop the Bar code and Recycle symbols and claim these are from the 1970’s. One thing that has nothing to do with the Material is the shape of the distorted can. A real can (Steel or Aluminum) will crumple, it would not smoothly distort. This can looks like it was warped by heat instead of just dented and crumpled by being thrown away.

yer could do that, also i looked it up and apparently pepsi cans either till recently or are still made of steel (in the UK). And thanks for the advice about warping them, I’ll make the crumpling more harsh when i put them in the final image.