This Shortfilm named “Sally” is my graduation work. Its about the shy student Eugene, who fell in love with a prostitute named Sally.
It took me two years to make this shortfilm.
It actually even took two more years.
I knew before I started my studies that I wanted to make this.
So I learned Animation, modeling, texturing, rigging and all facettes of postproduction
in the first two years. Then came the storyboardphase (1 year), where I gathered all my Ideas I had and pushed them more and more to get the best possible script I could.
Than came the last phase: The actual Productionphase (1 year) where I applied all the knowledge I gathered in the first two years on the new script.
Sally helped me to land a job in 3D and post.

I got to thank many people for their support and also this forum wich had helped me very often. 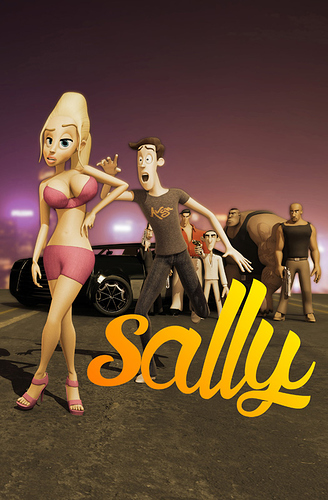 this really is impressive. Will there be any vids on how some of this was put together, or stats?

Excellent story! Those 2 years was not a waste great job!

This is an amazing accomplishment! Great character designs, cool story and truly professional animation. If there ever was animation gallery for Blender artists this one has earned a place in it!

hahahaha man, great story telling! the end is pretty funny make my day, congrats for achieve this result and all you learning during process!

wow. it was awesome. I could not understand anything they were speaking neither I could read the subtitles in white text. But I enjoyed the film

Excellent all around! Just loved it as a movie, independent of Blender or technique. I loved how it mocked modern “white knights”, too (although I assume you weren’t trying to make a statement in that sense.)

Hey guys! Really appreciate the great feedback! It took a long time to make that thing and I’m glad the people pay some attention. I also appreciate constructive critism because it helps to improove thing for later projects…
Thanks!

You did really great work.

I normally don’t do that.
But I need help!

I worked really hard on my blender animated short film!
Something like two to four years.

I took part in the suzanne awards. And maybe this possibillity could bring me nearer to my dream beeing an animator! You guys could help me, make my dream come true…!

You can vote, you can rate! Each Vote counts!
Please Vote for Sally on the following link:

Thanks in advance!
Dom

What a f**ing slt

This is some great work! love the story and the lighting, nicely done

@ SaKo Thank you very much!

For those who have an Blender ID and like my film Sally, please give it a rating of your choice!
Each voice is important!!!..

Wow, just wow. This is a great piece of story telling and execution. I love how you just wanted to tell a story, and you learned all those skills to make your dreams become reality. Well obviously it’s got it’s ups and down, but they don’t matter because the overall atmosphere is so great. Also considering you did this all by yourself is remarkable, fantastic job! I hope to make a short film myself one day, but due to lack of time that’s just not possible right now. But take my word, when I do make one, I can say that Sally was one of the greatest motivations to make something all by yourself.

Thanks Matve! Happy to hear that sally motivated you in that way! Such projects help you to see flaws in your work and give opportunity to really learn some stuff! I wish you much luck with your project and hope you’ll find the time to work on it!

The animation annoyed me.

@JustWandering I’m very sorry for that!

Try working on the faces, their eyes look like they’re bulging from their sockets, and the overall animation has this slightly clumsy wooden feel to it. I’m also not sure I understand what point your trying to get across other than the stereotypical “nice guy gets ignored by hot girl and punishes her for it”.