So I’m kind of in two minds about whether to post this here or in WIP, but since I’m drawing a line under it for now, I thought I’d post it here.

I also didn’t want to post it in critiques, because I think I know the major things that’s wrong with it, which is:

But yes, those are the major flaws with this image that I’m aware of. Perhaps some time down the line I’ll get around to fixing them, but since this was supposed to be a quick project, I’m going to lay it down and move on to something else.

But if you have any extra comments or criticisms about the composition, I’d love to hear them. 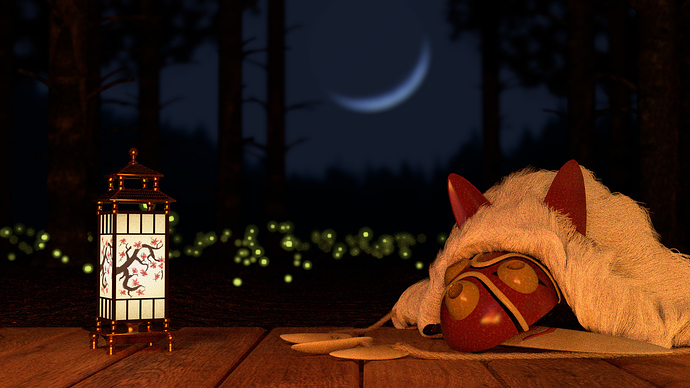 Have you separated the fireflies into their own render layer?

Am I the only one who is seeing faces in the tree that is on the far left?

Kanetik - I hadn’t, but that’s a good point. Thanks!

DominikKin - Well, now I am! In reality it’s kind of a texture UV artefact; the bark texture on the tree is pretty quick and dirty, mapped slightly squint so it isn’t massively obvious. I think it’s the symmetry that’s grabbing your attention, sort of like a Rorschach blot. Might have a fiddle with that if/when I revisit this scene.