Hi everyone, here’s a portrait of Santa Claus I did for the holidays, I had an old unfinished base sculpt and decided to work on it a bit more, and also took the opportunity to improve my hair shader.

I tried to make it look like a believable exaggeration without being full realistic.
C&C welcome

All Blender, render in Cycles, minor post-processing in Photoshop. 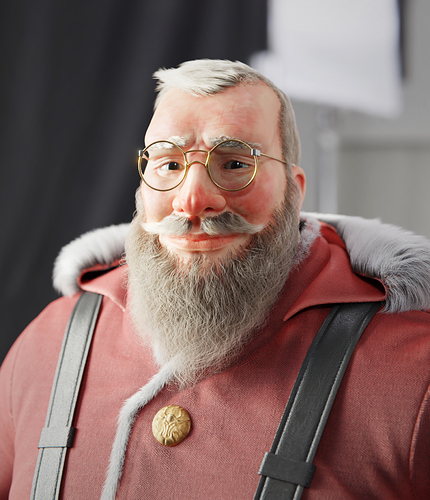 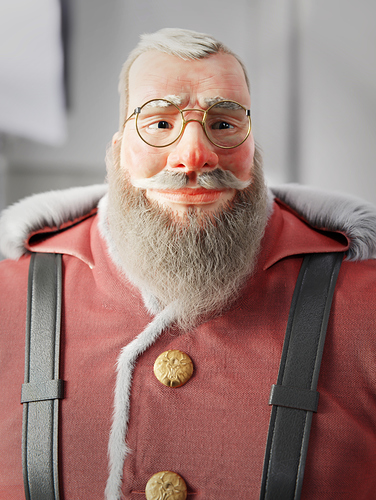 Merry Xmas to you all!

EDIT: A friend told me this render looked like a photo from a mag, like an interview or something, so she wrote it to go with the renders hehe.

Five Questions with Santa
So Santa, tell us. Have things changed since you first started giving out gifts during Christmas?
Well of course they have, it’s been a very long time. There were not many presents at first. I think I miss Yule the most. Then I did not have to do everything in one night. It’s a logistical nightmare, you can’t even imagine. Even more so now, with so many planes flying all over the place. In yule we could relax, have some beer, and eat a feast… for days… Humanity has gotten a bit dull with their dinners, now they only leave cookies out for me, why do you think I’m getting so fat? But well, you must follow the times. I blame Victoria, with her obsession with family and propriety. That has taken out the best parts of the whole thing, at least party-wise. I did like the tree idea, though.

Why do you use chimneys?
The whole chimney thing started because I kept hoping there were still some yule fires around… with some ale, some roast… by the time I gave up the search, I was already used to using the chimney. Some don’t have them, of course, but well, I never say no to a challenge.

With the population growth, how do you get time to go though he list?
Well, things improved a lot the year the elves gave me a computer for midsummer’s eve. That’s our Christmas, as you can imagine, actual Christmas time is our busiest time so we celebrate in the South Pole in summer. Anyway, they set the whole thing up, so now I get automatic behavior analysis reports.

What do you mean by reports?
Well, for a while I was pretty addicted to gaming, from there I got into programming, and then I made the behavioral algorithm, it works well with google to follow people’s behavior online as well. It was eye opening. In any case, it cut my workload in half. Too bad it also gave me more time to spend on the internet… I cannot tell you how many times I ended up in the weird side of 4chan, and in mid-November! All of this new distractions had me using Adderall for five years in a row to manage to get the job done… I had to stop, though, when I found myself rearranging the toy making inventory for the last thousand years in alphabetical order.

Do you think it’s ok to give out coal to naughty kids now, when global warming is such a threat to our survival?
I stopped giving out coal decades ago. Besides, you misinterpret my gift of coal. Winter is cold, you know, it was supposed to be a punishment in its practicality. Like when they give you socks for Christmas… very useful, but so boring… No, now I jam their Wi-Fi. Make it super slow, it drives them crazy. Well, I’d love to chat some more, but the show is tomorrow. Do remember to not bother the elves, they hate reporters, and the internet… with all the body shaming that goes on there, they don´t feel they’d be well received… Anyway, no more interruptions, or no Wi-Fi for you this year. Bye! 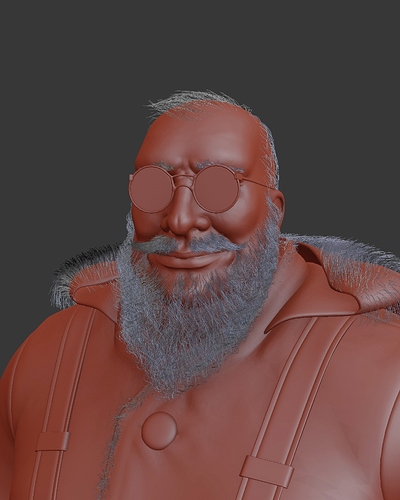 Very good, the hair material looks great. I really like all the details (like the buttons, for example.) Nice interview, too lol:)

Very good, the hair material looks great. I really like all the details (like the buttons, for example.) Nice interview, too lol:)

I’m working on a hair shader to share with the community, I hope to have it done by the end of the week.