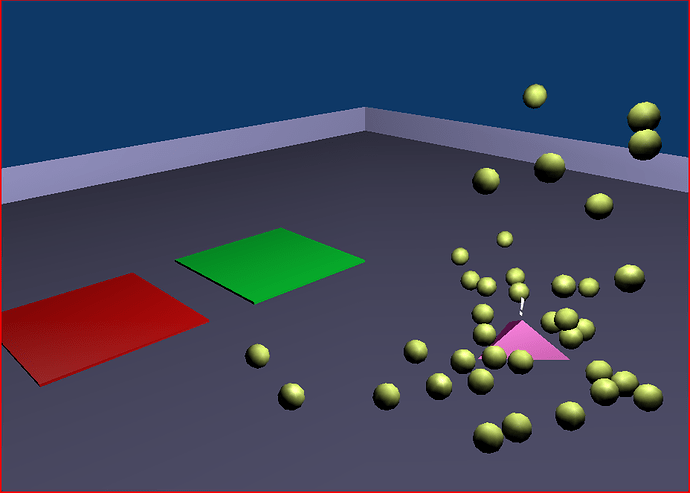 Here you can find the old version SaveLoader 1.1

after heavy work the new version 2.0 of the SaveLoader is ready for release.
There are some changes especially on the API, the file format and the internal storage.

The saved files are still pyhton scripts, but not compatible with 1.1.

The most important improvement is that it is possible to make savepoints and load them from another scene. I will explain how it works in a later post.

You can find the module in the attached Demo:

It is a little portal demo. With the arrow keys the ship can be moved.
When colliding with a white sphere you can collect points.
When driving over the colored squares the scene switches to another scene saving the current scene state.

Most important rule:
—> Never, never, never store or restore an object/scene within the same frame more than once <—
It is not possible to determine which one would be first.

The setup is quite simple. See the next posts for a small tutorial or check out this video tutorial. The important part starts at 01:55:

SaveLoaderDemo.blend
or go to the last posts of this thread. 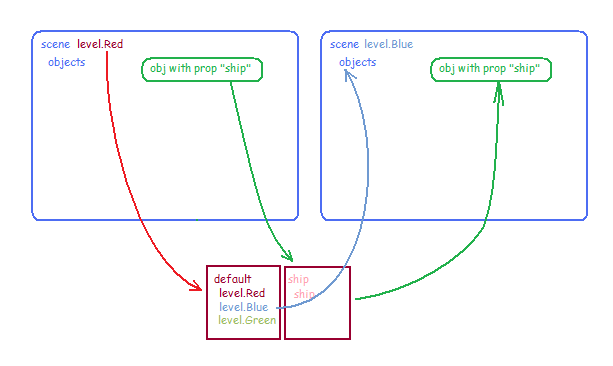 In this example the current scene is Level.Red. The ship drives other the blue square (ExitToBlue.Red) and triggers the switch to scene Level.Blue.

Following will be processed when started Level.Blue scene:

This is really good, thanks. These save/loading scripts will help a lot of people.

Have you though of converting the scripts to Blender 2.50? Because that would be great!

How to save the game status to file? 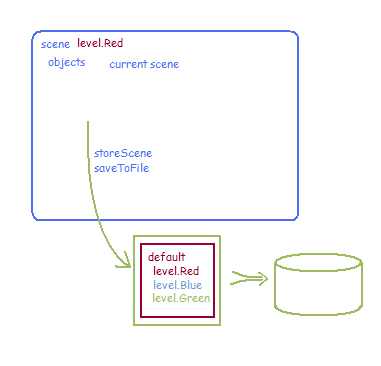 When the save event happens (<S>) following needs to be done:

How to load the game status from file? 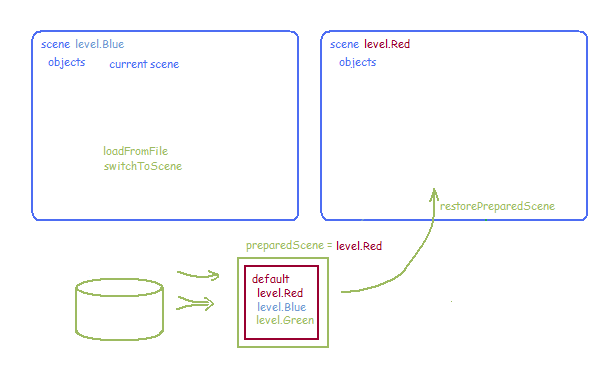 The current scene is Level.Blue.

Following will be processed when started Level.Blue scene:

Blender 2.50 would be a bigger chellange as it will be possible to dynamically load new objects.

Great Job Monster!!!
Your really great! Not only do you come up with quality stuff, but you always draw really great diagrams.

I updated the demo file in the top post. For some reasons some of the objects were not in the initial state. That produced some unwanted effects (e.g. not possible to mode to level red, not possible to load). It should be fine now.

I don’t understand this at all! How do you use this? It can’t be as simple as connecting the SaveLoad.py module to an “Always” and that’s it. I’m really confused. And will it even work in 2.5? My computer won’t let me play the demo.

Connecting to an always sensor makes sense if you want to load a scene state at scene startup. So yes it is that simple.
It is up to you on what events the script runs.

You can even append this empty to your own file. With <S> and <L> you can save and load from file. The filename is taken from the property (if any).

If the example is not working for you please post me the errors from the console. So I can have a look at it. It is not supposed that you fully understand the code. It is supposed to know what it does and how to use it.

(hi this is amazing script. but can it save the properties or the state of ipo animation? in my blend is not working this features…)

Could you provide me a .blend? The best would be with the torch and the save/load logic only.

I think there is a bug in blender with IPO controlled transformation (loc/rot/scale) when the objects are parented. This might be the reason. I haven’t digged into much detail in that as it is difficult to identify.
But it could be something else.

[Edit]
There is an ugly bug in the 2.49 BGE. It is not always reproducale.
Mostly it happens with IPO controlled objects parented to another object.
When reparenting and/or setting a new location, the location is reset to some unexpected offset.

There are two possible fixes:

hi. how can i just add overlay scene to be stored. i’ve tried the “Ctrl.storeScene” property with value “overlay”. and it’s not working. note the “overlay” is the name of my overlay scene…

wow… a very powerfull script. the saveload.py work perfectly fine.
but i have a situation, example:
i have 2 scene, which is basically the same (link) scene. but the camera is diffrent, 1st scene is first person view; 2nd scene is topview.
so my problem is when the user in the 2nd scene, user able to drag and drop the object and save it. after that go to 1st scene, user able to load the object position from the 2nd scene and it still still the first person view.
do you and any advice or solution for this problem? thx in advance.

I didnt use it yet, but this is very cool thanks monster, you really help us out with your work!
I just want to ask you, you think that the script ll work on burster?