I’ve got a question and I’m not sure if it’s more related to animation, rigging or something else, but it has to do with drivers. I’m trying to use the value of a shape key (between 0 and 1) to modify the value of the bevel width in a bevel modifier, so as an object scales up, the bevel also scales up with the shape key. It’s a little bit of an edge case, but we’re developing a script to export meshes that still have modifiers with shape keys, so I’m trying to get this as part of the non-destructive pipeline. But I’m having an issue where when I copy the data path from the shape key value into the path for the driver, the field is red as though it can’t pick up the driver path. I’m not all that familiar with drivers, I’ve tinkered with them before, but so far, I’ve been unable to solve this issue.

So here’s the value I’m trying to drive.

Here’s what I want to drive it with…

Here’s the issue I’m having when I copy that data path into the driver. 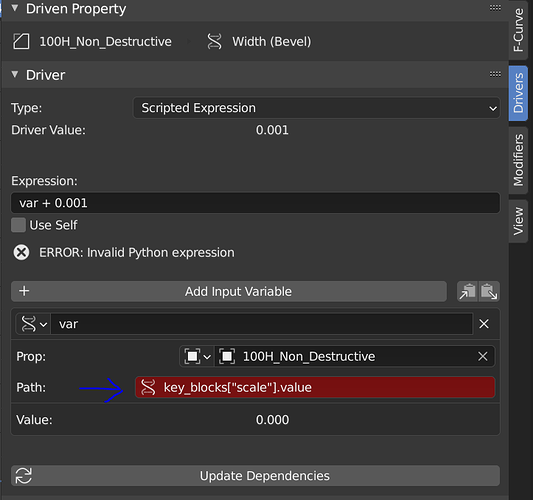 I figure once I get past that, I’ll just do a lerp between the two values I want to get the desired results in the bevel.

Hello there!
So to access that value you need to choose “Key” in Prop field (right now it’s set to Object).
Apparently that copied Data Path is relative to an object’s unique list of shapekeys… or something.