Ive been working on this for a while, but wanted to get it finnished ASAP. Seeing the Freestyle renders on Blender Nation made me get this out there as it might soon be out of date.

This was more of a project creating a “Cell Shade” effect, But i fell in love with this Scarlet charicter i was creating and had to finnish it and it bacame part of this project.

The Charicter is Fanart for a web comic called SequentialArt:
Link

Here is a link to the “CellShade” Filter:
Linkage
FullResImage

For some animation test:
Linkage
Linkage 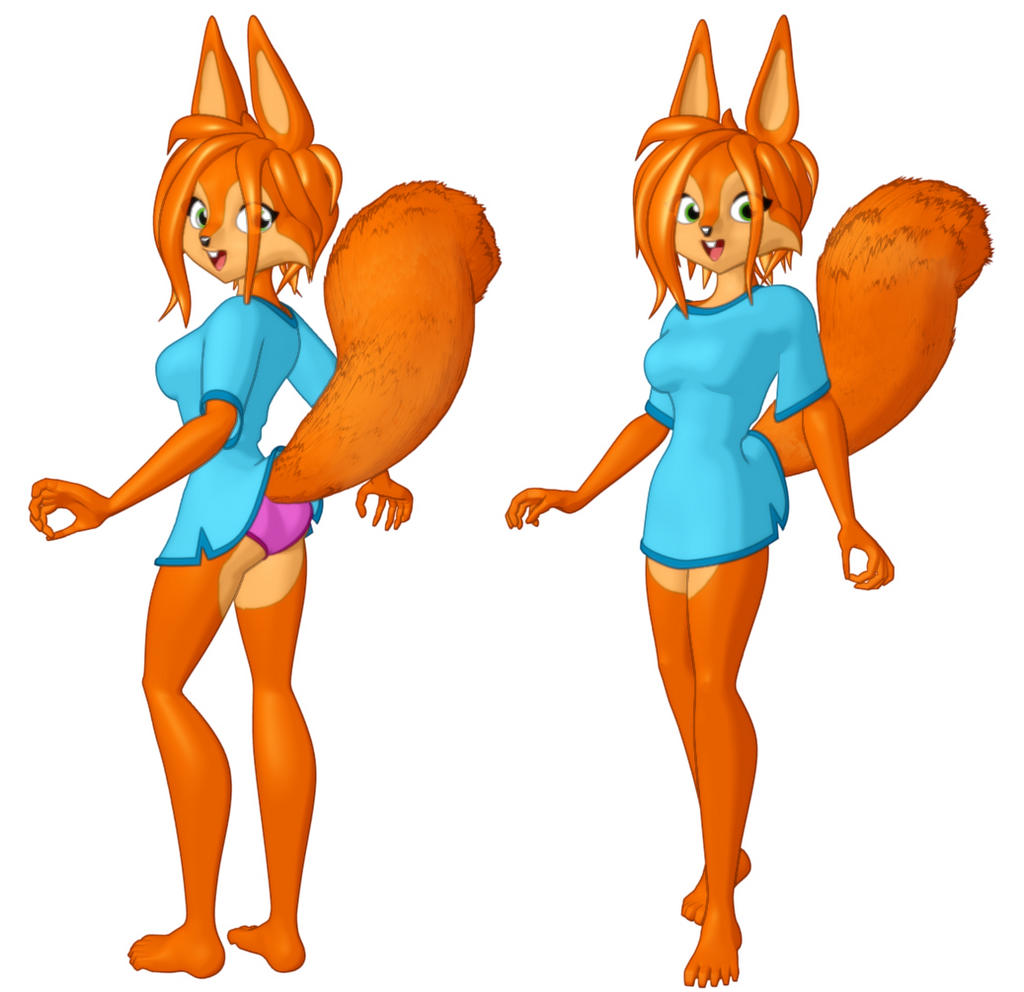 While I’m inclined to think your anthro-squirrel needs a tad more in the way of clothing, the shader as well as modeling are both very impressive.

Squirrels don’t wear any clothing, so you cant really complain that this one doesn’t have enough.

Wow, since when was this forum invaded by puritans?

Sexy and very cuuuUute! ^^ I love her tail and her hair. I saw the animation test, too. Blender really is going way up now. ^^

Thanks for the C&C keep um coming!

Its funny you should mention the clothing, in the WIP this came up too. It was weird when she had no cloths everyone just excepted that she was a squirrel girl and said nothing. But once she was wearing the T Shirt and pants then all of a sudden people started saying she was wearing too little! If she was wearing nothing i dont think it would have gotten noticed. Its the fact what she is wearing is Uhmm… naughty

I think that combined with the fact that she is very innocent makes you feel bad for looking and then you wont to cover her up!

But thats my two cents anyways!

Great piece there, and great thanks for the link to the comic. Read through it all and loved every second of it. I think you captured scarlet quite well.

Will have a go with the .Blend tonight

Hair looks a little “ropey” but I’ve yet to find a shader/modeling combo to fix that issue with cel-shaded hair in general.

Now, can you do a photo-real one with particle hair?

You probably know that Philip M Jackson is also known as JollyJack on deviant art.

I’d love to see a 3d version of Chloe

Have you got a DA account cos I bet he’d be stoked to see your version…!

While I’m inclined to think your anthro-squirrel needs a tad more in the way of clothing, the shader as well as modeling are both very impressive.

i agree with you!

Do you realise that the eye’s are showing through the head-tentacles?

Hi guys thanks you all for the comments

Surt:
“Do you realise that the eye’s are showing through the head-tentacles?”
Yes they are supposed too, like in the cartoons. But do they realy look like tentacles, are they that bad?

Denshidan:
Yes thankyou, Ive posted it on his webcomics forum.

Rocketman:
This was meant to be just a Cell Shade filter, but i do love this Scarlet character so i might do one in the future!

VectorVandal:
Sweet hope you get some good results!

Hiower:
Thankyou and your welcome.

Its realy wierd some pepole seem to think she is “Cute” and others seem to get “freaked out!” is this an uncanny vally problem or is it something else im missing?

great , anxious for the wires …

Yap its Sexy! Cool Freestyle!
@ Surt , eye's are showing through the head-tentacles I think your right

Yap its Sexy! Cool Freestyle!
@ Surt , eye's are showing through the head-tentacles I think your right

Its not done using freestyle its done with nodes in the compositor! download the blend and have a look

But do they realy look like tentacles, are they that bad?

Not that bad, that bit was half-joke, but their shading does reveal them as solid tubes. I’d be inclined to give them a strand-suggesting texture on nor, or turn off specular all together.

good model, but i’m in the “disturbing content” side. can you show the wire?

Hi thanks for the C&C

Here are the wires:
3QuaterView
Front
Back
Hand