Yeah, I´m using the border mask, was thinking of the bool or transparency approach. Thanks for the update.

Then, the progress on this feature is the following: there will be a proximity by border feature no longer using vertex groups in S5. psys using this feature will also be savable so you can potentially create your own clean grass biome easily.

That will be for Scatter5 official release in December. i might drop a Release Candidate few weeks prior

Ahh nice. That sounds really handy, getting the vertex group and “mesh density” correct always takes a bit of time, so proximity by borders sounds like a real speedup, just what I was hoping for

Looking forward to test it out

Good news on this subject too, adjusting particle-count will no longer be needed

Scatter5 is now fully based on density /m² thanks to geonode

I have a bug report unrelated to Scatter itself and about Lodify.
https://developer.blender.org/T85244

I responded in the task

Hello,
I don’t know if anyone mentioned it, but at 4K screen resolution, Biomes Library is displayed incorrectly. Or can it be set somewhere (of course I don’t mean constantly expanding the window every time I start the Biomes Library)? 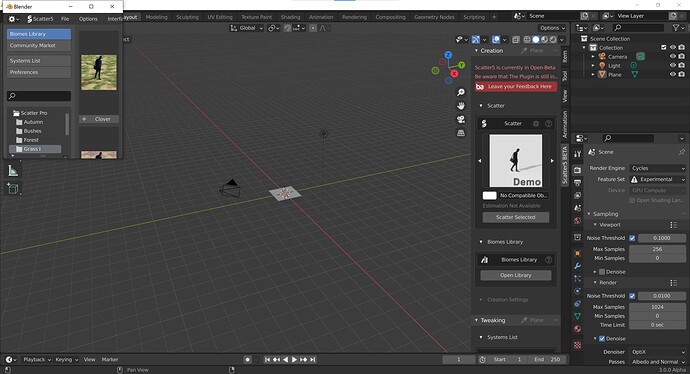 Hello,
I don’t know if anyone mentioned it, but at 4K screen resolution, Biomes Library is displayed incorrectly. Or can it be set somewhere (of course I don’t mean constantly expanding the window every time I start the Biomes Library)?

Or can it be set somewhere

Hi Dorian,
thank you very much for the reply. Really very fast service

How do I select multiple particle systems? I clicked on the pointer right below the the system list and it tells me I selected “full”. But if I try to change settings, it still just applies them to one system… Any Ideas?

Exactly Like blender,
You need to press ALT while changing the property

Thanks! You learn something new every day apparently

See the original issue in the posts edits.

Thanks for the report

For the 3.0 bug, it’s expected as it is not supported, however the 2.93 bug seemed to come from blender directly.

Perhaps you uninstalled an older version of the plug-in, then and installed the latest version? This can cause issues in a lot of plugins because blender sometimes needs to restart in-between installs

Totally curious situation, my file manager that I used for copying filters out stuff like .pyc I wondered if that could have been an issue. I reinstalled it directly from the zip file instead of copying the second time.

Loving the Scatter 5 beta so far, and I can’t wait for what it can produce in the future!

I have 2 questions, maybe you can help me with them?

Thanks for your efforts, much appreciated!

EDIT: Oh, and just to clarify: I started playing the animation and the particle push feature works perfectly fine, so thats not the issue

Is there a way to scatter objects on a defined grid (or in any kind of order)? Like, not random?

Right now you can choose the per vertex option, so you’ll depend on your emitter mesh
But there’s plan for that kind of usage, for 5.0 i hope, if not for 5.1

Are there any requirements for the particle wind effect to work? I can’t get it to work using the e-cycles build from 08th Oct (based on blender 3 alpha). Do I need a stable 2.9x blender for it to work?

3.0 alpha not supported, beta is 2.93 only, it’s specified on the website
version supporting will be the upcoming release candidate, followed by the official release version.
i have no dates yet

*well I had one, but blender 3.0 got delayed

Hi Dorian, thanks very much for your answers!

I have a feature request that may be helpful for some. I wanted to scatter leaves on the ground in clumps (which I can do perfectly well using the clumps feature) but those clumps would need to form a little “hill” where the centre of the clump is elevated from the emitter by a changeable variable.

I think this could be a useful feature for some people, what do you think?

I think this could be a useful feature for some people, what do you think?

Sure, I could do that!

But that would mean me manually duplicating single leaves (to create children), randomizing their transforms and moving those in the middle upwards a few cm, then joining them together and repeating that process 2 or 3 times (to avoid repetition).

Then I would need to duplicate the existing particle system, keep the single leaves instanced and instance the manually created clumps in the duplicate system as I want to keep the same clump distribution.

I just wondered whether there may be an easier solution to this specific task? I just did it, and it just feels like a workaround. Is there maybe a better way to do it? I could use geo nodes, but duplicating and running a randomize transform worked quite well and is fast too.

Don’t get me wrong, I don’t want you to add a feature just because some random guy on the internet asks you too

I just came across this specific issue and would have loved to have a simple procedural way to push just the central particles up a few cm, and set a falloff distance. Maybe other archviz people would appreciate that specific feature. But I understand your point of view too, you cannot just bloat the addon with loads of specific features. Just an idea! 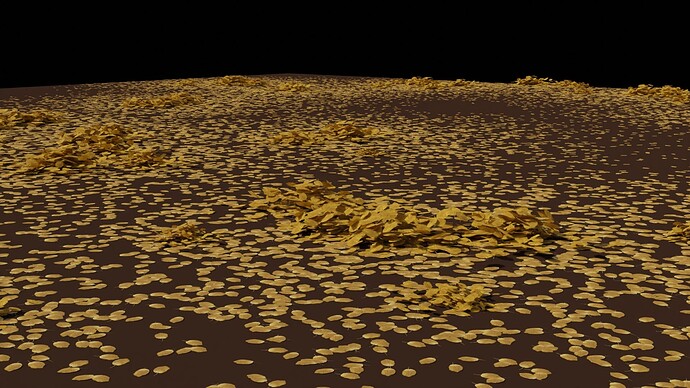