Alright, it does resemble the FN Herstal F2000. I did use it to a small extent to get the shape.

The thing is I’m trying to texture it and the Barrel grip just seems to loop terrible.

I’ve UV unwrapped it and painted it in GIMP. I can’t really think of anything else.

I looked up tutorials, but after like 10 minutes of chat they go on to teach you how to UV unwrap, which I know how to do. I have no idea how people make these really nice looking guns. It’s supposed to have a glossy plastic white plating on the entire rifle except on the dark parts which are a dark metal.

Supposed to look sleek, and futuristic. It Just ends up looking terrible, so I had to add darker spots and scratches to make it look acceptable. But then the grip really got me lost.

Here’s a pic of what it looks like now: 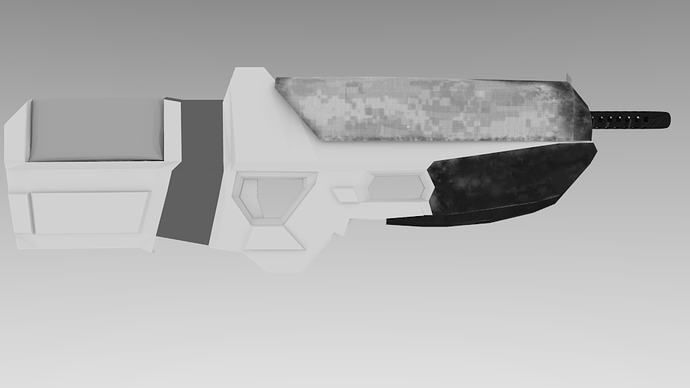 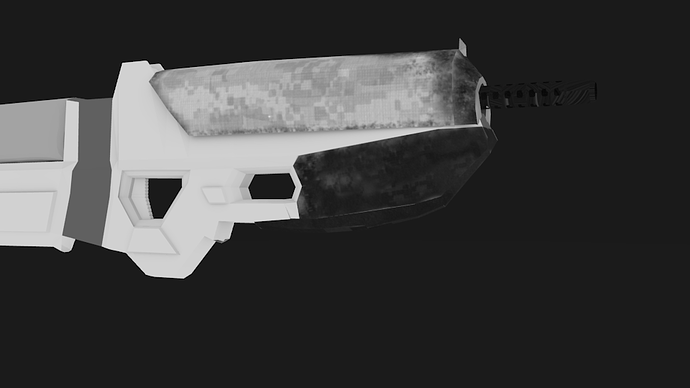 Development: Alright I’ve worked a little more on trying to redo the texture, but I get the same ‘fake’ feel. 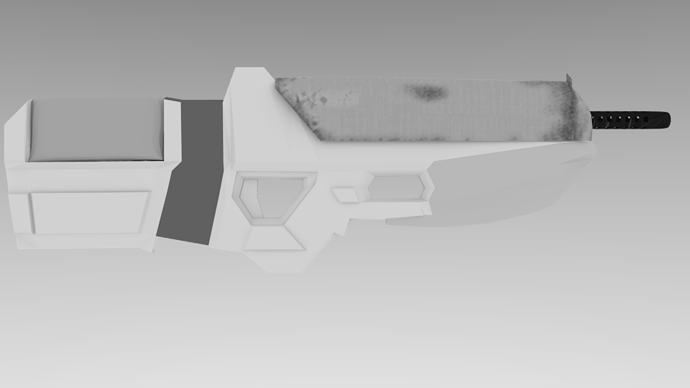 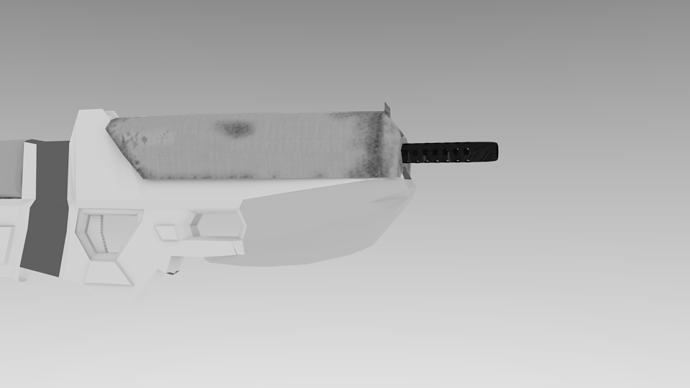 The aim is to get the weapon to somewhat resemble the theme in this image here:

If anyone wants to take a look at the model themselves, and see if they can help out.

But to give you something to start with , here’s something very basic

I don’t know if you have photoshop, as the full version of photoshop CS2 is oddly freely and publicly downloadable on adobe own website :
http://www.adobe.com/downloads/cs2_downloads/index.html

So i’ll take GIMP as an example.

First in Blender. that’s not very good to have ngons on something you’re going to unwrap, it’s never good on anything you intent as a game asset (and check your polycount, the subsurf you added to the barrel with holes skyrocket the polycount). 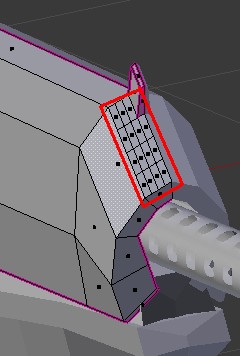 Select all those faces (in face selection mode), press X -> Dissolve, then press F6 and enable “Dissolve Verts” to obtain this : 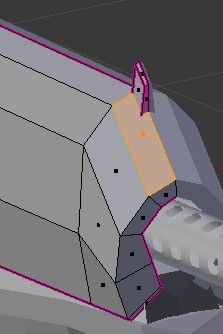 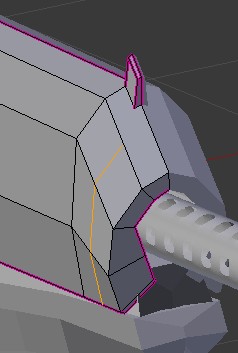 And select those vertices 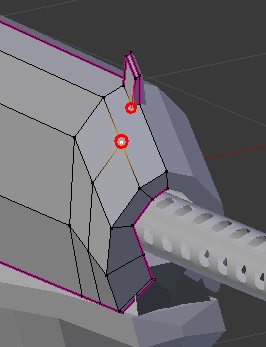 Press J to join them in an edge 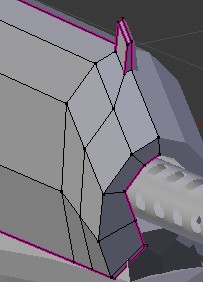 That’s all for this section, it’s now all quads .

By default, the unwrapping is in angle based, but as it’s not something organic, we want the unwrap to be in conformal mode, so after having done the U->Unwrap press F6 and change the method from Angle Based to Conformal.

Now in the UV Editor click on UV -> Export UV as Layout.
Save the png file where you want , notice the size you’re saving it (in the Save window, look into the panel to left, at the bottom), by default it’s 1024x1024 i think.

Move that new layer on the bottom, so the uv layout is always on top

Make sure the new layer is selected then click now on Filter -> HSV noise
In the popup set Saturation to 0 , increase Value to +/- 30 and click OK

Right click on that Layer and select “Duplicate Layer”

Now select the layer that is at the bottom
Now click on Filter -> Blur -> Motion Blur. 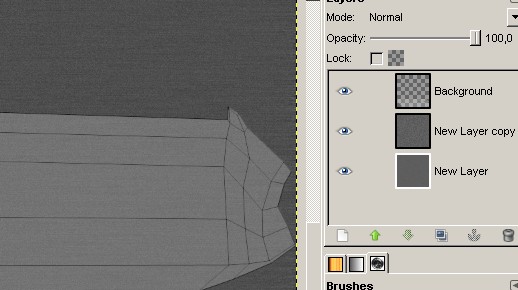 That should give something very roughly metal-like (see some tutorial on google on how to get something better than this as it’s just something basic, or just download a free metal texture if you wish)

Add another new layer, make sure it is full of transparency, move it on top of both the grey layers, but again under the uv layout layer.
We’ll now work on it, select your brush tool and set its color to black and draw a line (to draw a line in gimp, click once with the brush somewhere, then hold shift then click at the destination of that line).

By example , following the UV, i draw like this (lower a bit the opacity of the UV layout layer so you see what you are doing, but be sure to reselect the correct layer to draw on, because in the end we will delete the UV layout layer) :

Now change color of the brush to white, and draw along the black lines with it so we get some kind of depth effect 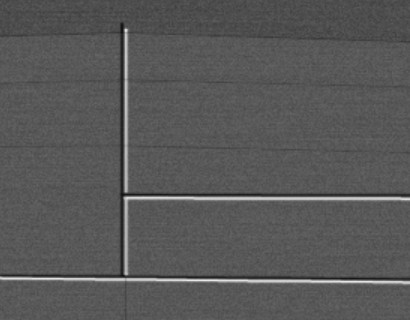 Now change this layer mode to Overlay too, so it “imprint” more nicely to the background 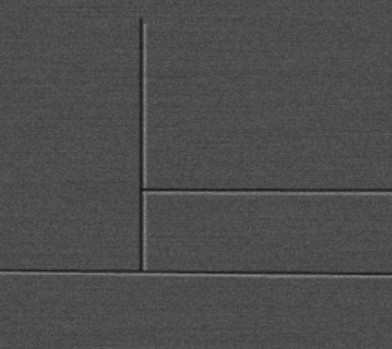 That will be all for this simple example, texturing involves more than lines but lot more work, but that’s a basic way to start, lines on hard surfaces usually helps to gives some “panel” feel that increase nicely the texture visual, don’t understimate the power of lines

Delete now the UV layout layer and right click on the layers -> flatten the image
Save this image into a new texture, and load it in Blender 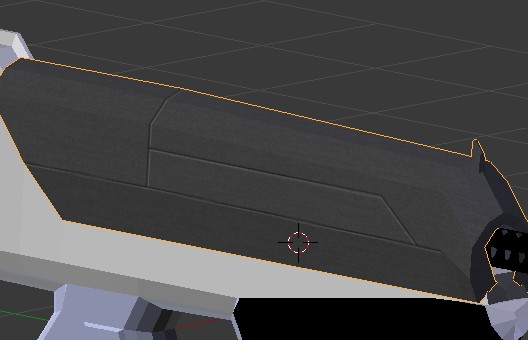 More work to do on the texture (dust, scratches, reflections, shadows, etc…) , but it’s a good basic for what is the workflow regarding layers, layers modes etc…

By example trying to add some scratches (low size brush strokes, playing with the brush and layer opacities etc…) 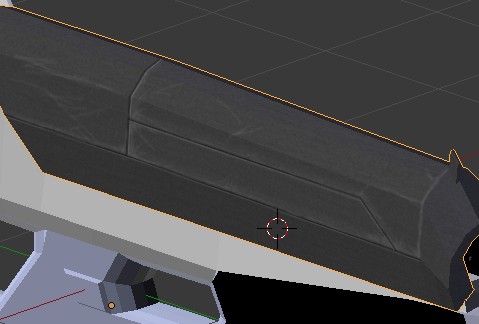 It’s where it is good to have the uv layout as a layer, as it is usefull as a guide to where add some brush strokes etc…

Thank you so much for this.

The time it takes to make a reply like this is incredible.

I just saw your reply, and I’ll get to using this method right away. Meanwhile I was working away at making the best texture I could for the body. Been an hour or so and only done like 1/8 of it. Can’t wait to show you.

Once again, thanks a ton. I’ll get right to using your methods.

I’ll be sure to update this thread with pics so I don’t seem to just drop out when I get an answer.

@sanctuary , you beat me to it. I was doing the same.

@Owatch , you can utilize the information given by sanctuary to create cool looking textures for your rifle. after creating all textures, don’t forget to create Normal Maps for it. You can do it easily in GIMP with Normal Map addon . same goes for specular map (Desaturated texture, play with levels etc).