well, semi tactical anyway. this game was originally an animation demo, using actions instead of IPOs so I could blend them together. I am quite pleased with the result, and have been slowly expanding it into a full game. 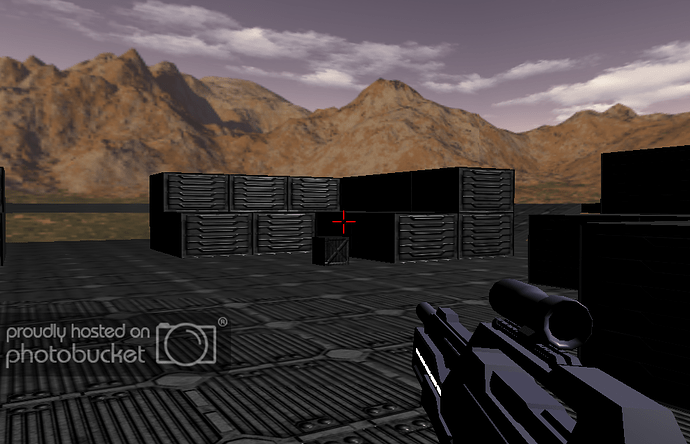 controls:
wsad to walk
hold e+direction key to sprint
c to crouch
left mouse button to shoot
right mouse button to scope/ironsight (MG has scope, pistol has ironsight)
1,2,3 or scroll wheel to change weapon (there is no 3rd weapon yet though, so no weapon will appear when 3 is pressed)
if you stand in front of a ledge and press jump while holding w, you will climb up.

after I implement the 3rd weapon (I need to decide what type of weapon i want there.) I will need to implement weapon function (bullet force and bullet holes. ATM shooting has no effect on the environment)

one of the main problems I am havin with this is everyone who downloads it says that once the game starts, the player is immediately launched. (bounds problem?) I do not have this problem, and so far no one has been able to tell me anything helpful towards solving it. If someone could take a look at it and see if they can find the problem’s, that would be swell. (I do have a hunch. I re-downloaded blender 3 days ago, and I wonder if that I the version I have contain some updates that are causing issues. just a thought)

anything else you have to say about how i can improve this would be infinitely helpful.

I can’t play the game on this craptop that I’m using right now, but just from looking at the controls I can tell you that they should probably be changed. If you want to use a sprint modifier, it’s best not to use one that requires the player to take a finger off of a movement key to use it- that’s why games use shift for sprint, the left pinky finger wasn’t doing anything anyways.

Additionally, and this is much more personal preference, but unless your crouch is toggled, c seems like an awkward button for that- ctrl seems more comfortable, and again the player doesn’t need to take their finger off a movement key.

crouch is toggled, and the e is from a FPS that I play frequently. It was just what I’m used to. I will change it though.

also, I set up the textures so that you can play in multitexture mode as well as GLSL.

ok, fixed. sorry about that.

I was pretty tired when I posted last, but the more-awake me feels like you could get away with whatever controls you want, so long as you gave the player the option to change them- just a simple menu framework, with a controls menu, would put your game head and shoulders over most blender projects I’ve seen.

…I’m surprised, it actually runs on my laptop. 'course, I get the flying away glitch, and it crashes blender when I exit the game, but still. I hope you don’t mind if I poke around in your file a bit to see why I go flying.

[edit] my computer keeps crashing blender, but I was able to see that the console is complaining about being unable to find a module called “addForce”, that might be your issue (also, you’re using some deprecated methods)

by all means. I don’t have any problems, and everywhere I post this, people have problems, so I really can’t do anything to fix it XD

if you could look into that, ti would be swell

I will look into the addforce thing. I think it is from when I tried to implement bullet force, and couldn’t get it to work, so i moved on to other things.

This looks great so far, only problem is when I hit P the camera turns up and to the right into darkness, then I can only switch weapons, shoot, and zoom in. I’m using 2.5 is that it?

It might be. I have heard that there are some problems when going from 2.49 to 2.5

Edit: Same problem, the launch thing, it’s just that in 2.5 I couldn’t turn and see the map flying away from me lol.

I’ll definitely subscribe to this thread tho so I’ll try it as soon as you figure it out.

Yoda, are you using a mac? I’ve discovered that the game runs fine on my mac, but has the flying away problem on my windows machine. Both are using 2.49 so I think it’s safe to say that it’s not a 2.5 issue.

The error return is from your bullet script, which causes it not to actually fire bullets (both windows and mac) I couldn’t figure out any more because you have well over ten times the amount of logic bricks than you need, and I couldn’t find where any of the scripts besides the mouselook were actually running. I suggest doing all of that on just a few (less than, say, 5) objects, and almost entirely with python- it will be far more compact and organized, and much easier to see where problems are.

the logic bricks controlling the addForce script are on an empty parented to the crosshair object. try deleting all of the logic bricks on it. (I thought I had deleted them, I guess I forgot to)

also, I am not very good at python. maybe someday I will be able to go back and redo things to make them operate more efficiently, but for now, I need to do this the way I know how.

All i can say is wow. I’m pretty new to the game engine, but have used Blender for 5 years now and I pick things up really quickly and I am very artistic. Where did you learn all about the different game logic blocks, what they do, which ones to use to get what you want to achieve, etc. Because I am making a FPS futuristic game with a few friends I meet over this website, and we have a story and are starting models/concept art. Anyway, please help me learn at least where to learn more about the advanced game engine. Animation I am fine with. But yeah because even though my game is in the modeling stage, I am still practicing harder game tests. Please direct me to somewhere helpful, or teach me a little

Word me too cool stuff.

@JESUSFRK14: I am not sure about your problem’s downloading it. it still works fine for me. I will try uploading the .blend to the website later today.

@kpgrassie: if you pick up things quicly, that is a very good start. A lot of the bricks functions are fairly straightforward, and figuring out their application is just a matter of trial and error. stick with it, and you will eventually get there.

Thanks man. I’ll do that. The only thing is do you know what the different controllers do like AND, OR XOR, NOR, NAND, XAND, etc. cuz i know they are logic gates, but idk how each affects a certain function

well, I don’t know all of them, but I will explain the ones I know

i think that’s right. feel free to correct me if I am wrong. I don’t know how xnor or xnand work, if someone could explain those, that would be great

update: I implemented cutscenes, and a rudimentary menu system (visual only)
I do have one question. how would I get blender to preload a scene? what I am doing now is sort of effective, but only if you let it load the first time. after that it loads faster, but I would like ot ti load the next scene with no pause (smooth transition from cutscene to gameplay)

thanks so much. that makes so much sense when you have a bunch of sensors for something like jump or camera zoom, like you had in your game, with the logic bricks grouped by function, with more than one sensor. I’ll remember that.