Hi there
here is a scene I have finished last week. i could spend more time on it but I have other projects I want to focus on.

It is not meant to be a photorealistic image. I have not yet had the chance to travel to the scottish highlands but this is how I think of it. The render is more intended to have a painterly feel.

Ratings and C&C are welcome of course.

Edit : updated version; I added slight motion blur on the raven gave it another pose, also tweaked its scale a bit. Also redefined the DOF and slightly simplified the background. 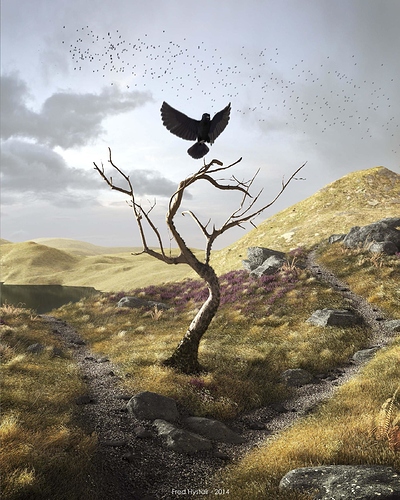 I have also composited a little clay render of the scene. I hope you’ll like it.
Edit : the clay render is obselete for the render, but still shows the geometry behind the scene. 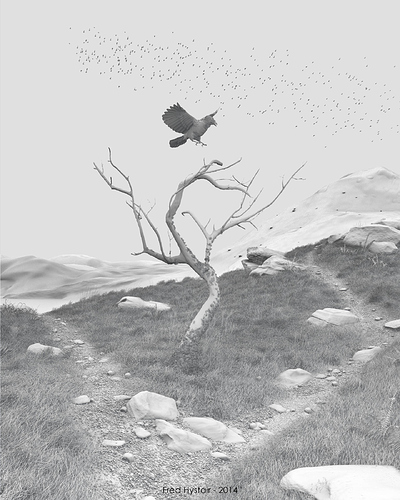 Beautiful render! I love the composition and lighting.

Looks great to me. I think it would have been cool if the bird had some motion blur. You did a really nice job on this. beautiful render.

Very nice image. It seems that we have in common some brittanic dreams !

Is it a lake in the background on the left, at the end of the trail ?

Wow! I have been to Scotland once, and this captures it really nicely

Hi ! The render looks gorgeous, but the bird seems far too big. It makes the moor look like a small-sized diorama instead of a wide landscape. Also, the tree might be slightly too small. Nice job, though : )

Hi thanks for the nice comments!
@Tjill : I know some parts are not exactly the perfect scale, but my intention was not to be fully accurate. I rather concentrated on the composition, the colours and the general feel of the picture. However, “c’est bien vu”

@ roubal : yes, indeed, it is a lake or a “loch”. I could have modelled the loch ness monster, but time was lacking!

I live in Scotland and you have done very well on this. The grass tussocks and the general color of the hills and the purple heather color are nice. As you say its not exactly photo-realistic but its well executed. Some blur specifically on the main bird’s wings would improve it I think. It’s actually quite like some of the landscape near were I live.

Hi Bunc
Very glad you like it, and recognised the landscapes you live in. I indeed spent quite some time on the grass tussocks. These are internal hair particles with quite serious tweaking to achieve the patchy clump effect. The colours are also somehow close to what I can see not far from where I live, in Brittany. Now I have to visit Scotland to be more accurate next time

BTW you are right about the motion blur, I’ll try to do it if I can find the time.

love the way it is! great work, cheers

Thx for your kind words!

Grass looks amazing with all the little details and wild flowers! And the colour harmony and composition is great.
Bit of motion blur on the bird and it would be perfect.

This image remember me a lot the poem Childe Roland to the Dark Tower came, five starts for this work!

Hi, to the general request I definitely need to add motion blur to the bird.

wow! I really don’t see why this isn’t in the top!

Thx IIlia3101. If you want to repare this cruel injustice, you still can rate this thread !

Hi there,
First off, excellent work on the composition colors and details. Is this cycles or internal?
I do however have several critiques if I may.

-The DoF you currently have makes it look as if this whole scene is about 10m or so to the background, so I’d suggest lowering it.
-It seems like the raven is looking into the camera, which is a bit odd.
-The raven seems to be static somehow, even with the motion blur. I’d try playing around with his pose to simulate a bird in landing. I would have told you exactly what the problem is but I don’t quite know. Here’s an exaggerated example of what I mean: http://thumbs.dreamstime.com/z/bird-landing-12768528.jpg
-The island in the middle of the loch makes it look more like a river, I’d suggest removing it or moving it down and to the right.