Scrat from Ice Age for the Blenderguru movie competition.

Heya Guys.
For the past few week I’ve been trying my hand on Scrat from Ice Age.
This is my wip on my entry for the new Blenderguru competition.
I havent had much time to work on him so I only managed the model and a rig (without the constraints) so far.
I’m quite happy with the model since I didn’t have a modelsheet to work from. I used about 30 reference images from the past 4 Ice-Age movies. and it also gave me a good excuse to watch them all once more

I did notice that scrat’s fur changes through every movie so I’ll have to make a choice there.

I will probably be forced to use the Blender-Internal Renderer for the final image since Cycles doesn’t have a strand render yet and using curves or geometry doesn’t give the result I’m aiming for.

This isn’t the final pose or composition. it was just a WIP render to test the geo and see if the rig worked.

Render with Cycles made with Blender.
Scrat is property of ‘Blue Sky Studio’s’ I do not claim to own this character’s concept or to have designed him myself.

All Critique is welcome!

[edit] How do you plan on doing his fur? [edit]

[edit] How do you plan on doing his fur? [edit]

I alreaddy did some experiments. I’ve got some experience with using hair-particles and strand-materials in the BI-renderengine.
I will probably use multiple particle systems. I use vertexgroups for the density and a vertexgroup to get the basic length of the hair done before going into particle mode and combing everything in place. Atm I’ve got two particle systems in place; 1 for the body and 1 for the tail. but I think I’m gonna add 2 seperate Particlesystems on the body to get more variation in the rouchness since using a vertexgroup for that doesn’t give much control really. If I have the time I might consider learning a external render engine that can render hair particles, but for the moment I think I’m gonna give hte BI a go first. maybe render the envoirement with Cycles and the character with BI and then composite them togather.

Wow, I love this character. It looks like you have really nice topology so far.

Heya guys.
A few more hours spend. a quick texturepaint and a lot LOT LOT of combing in particle-mode. I think it still needs a lot of tweeking till it looks right. the fur on the bosy is a bit too rough. and to long in the facial area. but yeah. a few more days to go… hopefully I’ll be able to finish him before the 25th.
All critique is welcome offcourse!

Sorry I’m reading this a little late. I indeed redid the model, since it was too fat. thanks for your critique.

Heya Guys, this is a new WIP of the model.
I made some heavy changes to the model. redid the rig, the textures, basicly everything XD because my model was to fat since the mesh already had the fatness of a scrat with fur.

scrat_by_ristridyn-d5f9fak.jpg961×831
Still a lot LOT of work to do. The model itself I think is good enough. so now I have to build the scene. I’m first gonna try to do it all within the BI-render but since I’m way more used to cycles I might make this project a hybrid. and render Scrat with BI and the envoirement with Cycles. All critique is offcourse Welcome!
I just hope I can get it done before the 25th XD it had kind of been a real challenge to find the time to work on this since I started o 28-08-2012 and still haven’t finished. but every minute counts!
Cheers.
Ristridyn (Ristridyn) September 18, 2012, 2:00pm #9

O… yeah here you guys got a nice pair of renders. Before and after the yweaks on the geometry.

I hope you’ll make it to time!
If you need some ice cracking tuts for Blender, I know at least two. One with Lattice and second with Dynamic Paint + Fracture Cell (new type of fracture in Blender).
What do you need else? I have some props (without textures) but it’s not close to this cartoon’s theme.

nice model here,i would like to him lit better,right now he is looking flat with the current light setup,would to see some more refined shadowing to see how he reads.

@ Moolah Thanks for your Comment :D. I’ve already created the icebergs and am gonna texture them today. I’ve also made a ice age phiranja model that one too needs texturing. and I think I’m gonna be fine without tutorials XD since it is for a contest I really want to depend on my own knowledge of blender because that is what makes these contests so challenging

But you’re right, it’s gonna be a real chellange to get this done before the deadline closes.

@ ng-material Thanks for your comment, the lighting does indeed need some more tweaking and depth added to it. I’m already working on that. also I’m trying to get the composition done in sucha way that you do not need to see him in total side view, that I think will also help big time. 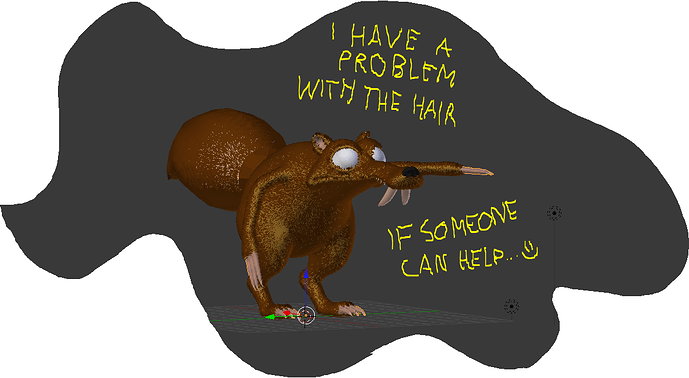 Well, helping the competition would be kind of a letdown for me

but I think there are some good furtutorials out there.

[edit] Blendercookie has a great one [edit]

Another few days of experimenting, modeling and texturing. and yet so much to do

created a scene where scrats ‘ship’ will be pulled by the phiranja. this concept I call: ‘top of the foodchain’

but this one I broke of since I think it gets the focus off scrat.
so my next idea still had the phiranja but in this case I made scrat stand on a tiny iceberg.
this one is called ‘in dangerous waters’.

the concepts have yet so much work to do

the iceberg, water, lighting, and again the compositing still need to be perfected.
so the deadline will be a real… quest

All critique is welcome,

This is looking great

As far as the fur goes it does look kinda flat. I suggest you add a noise to your texture and making it blend with the texture, it should add fur color variations.

As far as the lighting goes, Fur require buffer shadows to cast proper shadow. I suggest parenting a Sun light with no emit, that doesn’t cast shadow nor specular but only sets the atmosphere, to a spot light which is set to about 1.5 - 2 intensity with a little yellowish color, buffer shadow enabled with a slight dark blue color instead of pure black and buffer shadow size to the max. This would be your main shadow casting light, so position it appropriately. Then add 2 or 3 point lights, on under to the left, one more on the top to the right and one behind to the left. This will fake the color of the sky and add some sort of rim light to your fur, so you can set them to a .5 intensity and a bluish color that isn’t too bright either but that fits the sky colors. I suggest to enable Ambient Occlusion set to .5 and Environment Lighting to .5 as well. Make sure to set the gather method to approximate (Which works with fur) and at least 2 pass to 4 pass.

This should make your fur pop out more since it will self shadow as well as cast proper shadow.

Keep up the good job

The one thing that stands out to me on the model is the eyes. It looks like you need to scale them up by about 30% and make the stucture around the eyes thinner, if you look at the referances his eyes are usually almost touching which gives him that crazy bug-eyed look. But I think it looks awesome either way, much better than anything I’ve ever done!

Great job; loved the movies and you caught the look; the fur seems different than I remember though. Memory is unreliable /nod.