This first post has sorta become obsolete, please read down for continuation of thread.
C&C and Advice desperately needed.

Post the rig on this site so we can see what you’re talking about.

Check the Armature in Pose Mode, some bones have constraints attached to them.

For example, in “Pose Mode” if you select the left Shin bone you will see in F9 that it has an IK solver constraint to “footMech.L”. Simply go around the Aramture and copy all the constraints like this one to your rig.

Also some bones are hidden, select them in “Edit Mode”, switch to “Pose Mode” and un “hide” them in F9 section.

Lastly, the fingers have pre-made “Actions” like Finger Close. which you will find in the Action Editor. This you make yourself.

For example, select the finger at frame one, inset a key with “i” on keyboard, go 20 frames up, rotate finger to close and inset another key.

Give this action a name the Action Editor like Drv_Close_Finger. Put this action in the “A/C” section when you’re adding “Action” contraints to your fingers in F9 while in “Pose Mode”.

Thanks Ozo, but that is exactly what I did, I think.
The hands were easy, been working on the tail as well.

Heres the rig, could someone figure out whats wrong with the foot.

Goldensparrow I can’t believe you made me become a member of CGtalk just to see your rig. :rolleyes:

I can’t see anything wrong with the foot at first glance. It looks like you’re making a wolf.

You know dogs like wolves stand on their tippy toes not their hands. I’m looking at my dog as we speak.

Cheers Ozo, sorry about that. Good suggestion, but I think the Ludwig foot rig is really solid. All the bone seem to be there but they must be connected wrong or something.

If Sketchy around somewhere, If you wouldn’t mind mate could you take a quick glance.

Goldensparrow, that’s a good idea. Sent Sketchy a PM and see what he says.

Post it somewhere we can look at it without having to sign-up.:rolleyes:

Here ya go boys and girls.
http://www.you-wot.20m.com/
I hope this works, it won’t let me link to the file but if you go here you should find it, the file name is scratrig2.

Thanks for al your help, keep it coming.

You ran into the same problem I did when I worked on the fox in my last project. When you talk about the leg being messed up I assume you’re referring to how the IK doesn’t bend like a real animal’s leg, instead going all wonky?

I’ve yet to figure out a good way to do IK chains with multiple directions, like this. What I mean is, you’ve got what amounts to two knees in there, and they’re both going to try and solve for their own directions in a way that’s both uncontrollable and relatively unpredictable.

I’ll save you some time: adding point to constraints does not solve this problem. Actually, the best solution I’ve found so far is to rebuild the leg so that there is only one knee. Above Ozo said that dogs stand on their toes, and when you think of it like that you can redesign the rig such that what we generally think of as the lower leg bone, or shin, or whatever, becomes the foot. You essentially end up with the same rig as in a human, but stretched out. More control, less headaches.

The second option is to split the leg into multiple IK chains and deal with them separately, but I’m lazy and in my tests that took too much work. However, it proved even more controllable than my first suggestion (or rather, Ozo’s, as he suggested it first). Up to you.

Regardless of which way you want to go, I’d first have a look at real anatomy. (http://ministryofdoom.org/cloud/blender/20060814/lion-hindlegs.jpg – cribbed from Wikipedia.) Mimic the bones there, and pay careful attention to how the whole “tip toes” thing is quite easily seen in the bones. Keep posting your updates. I’m curious as to how you’ll go with this.

Thanks for the help guys, keep the advice coming.

Just for those of you not on cgtalk, heres a grab of the model.
The body topology has changed since I posted at cgtalk. I found a picture and tried to follow the topology of that.

PASTED FROM CGTALK POST.
“Inspired by the boys over at blue sky, here is a tribute to them. SCRAT!
Recently I have been wanting to bone up on my rigging techniques, as my character designs suck, I decided to model him, going to try and get a very sophisticated rig on the go.”
END.

By the way, if any of the Bly Sky boys see this, this is for my personal use, you are gods of the cg world. This is a tribute to you guys, please do not sue my ass.
I cannot take any credit for this magnificent character design.

I found this pic from a great article at
http://mag.awn.com/index.php?ltype=pageone&article_no=2838&page=1 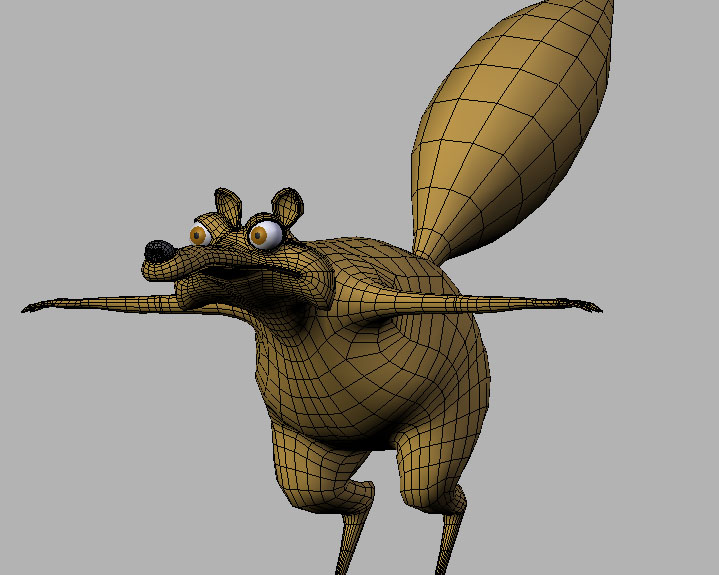 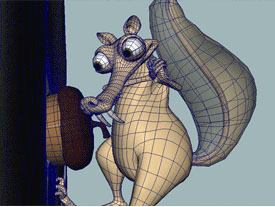 By the way, I may be a complete idiot here but when I see pics of max or maya rigs, the controls are circles or shapes, not bones.

Can this be done in blender, I remember trying this somehow before but I set keys on the control shapes but it didn’t hold the armature in the pose, Is it possible to do.

By the way, I may be a complete idiot here but when I see pics of max or maya rigs, the controls are circles or shapes, not bones.

Hi goldensparrow
there is a new option in the CVS blender where
you can choose to have mesh objects to replace the bone.
Heres screenshot with the Armature in edit and pose mode, and the
new option highlighted. I’ve put the bone replacement object on the 5th layer.

cheers Nozzy but erm, where can I find the CVS, does you got a link, anyone?
I don’t understand the CVS thing works.

Also if anyone would like to model the inside of Scrats mouth for me that would be great, I’ve tried from scratch 4 times now and I can’t do it. Too fidley.

cheer Nozzy but erm, where can I find the CVS, does you got a link, anyone?

Sure, this one should work:
http://www.graphicall.org/builds/builds/showbuild.php?action=show&id=115

COOL. I chucked in some of these object handle thingys.

Also little tweaks to the model. 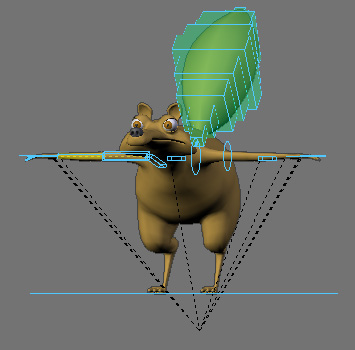 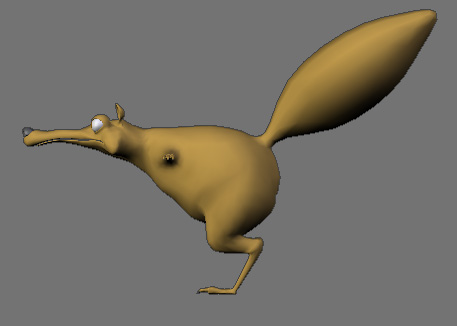 Both arms setup are done now, pretty much.
Still no idea about the legs really, anyone any really good advice?
Any advice on the spine and squash and stretch. you where it should be implemented and how? 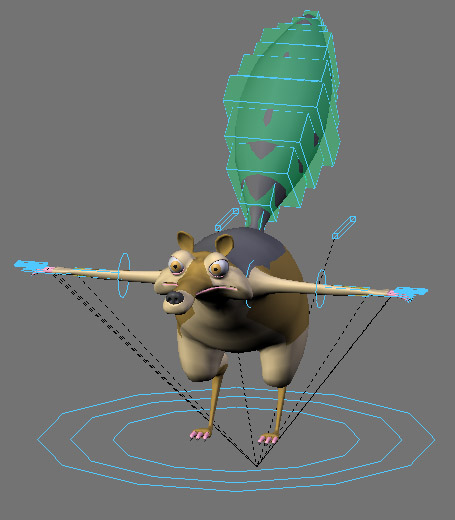 Hi Goldensparrow. I’m looking at your rig right now. You did a pretty good job of duplicating Lud’s foot, but your IK solver is targeting the bone. The IK target should be FootMech.L. However, when I made this change, the whole rig broke, so you’ve got a problem somewhere else as well. I’ll keep investigating and let you know if I figure it out.

I found this pic from a great article at
http://mag.awn.com/index.php?ltype=pageone&article_no=2838&page=1

Anyway, this is going well

thanks guys, anyway at this stage I’ve completed the arms rig, the tail is sorta done, the tail is driven by ipo actions, assigned to two bone underneath the tail, the left one does the curl of the tip and the sway of the tip, the right mirrors the actions. I have scrapped the leg from my rig, I will totally rebuild it. I’ll post when I make some progress. Also I have no idea how to setup the spine, so if anyone has any ideas… Cheers

Anyway, I rebuilt the legs, the foot control is still the same as the Ludwig foot, the legs are basically Ludwigs with one extra bone and a Ik handle at the top of the shin, it seems to work quite well.

Also had a go at a spine, also sorta copied from Ludwig only no stretch, yet…
The first draft of the rigs pretty much there. Just gotta add the neck and head.
Still gotta start a facial rig, no idea how. Any ideas…

Now to the bane of my live, Skinning!

Can I just ask, are the ribs included in the rig for better deformation, are they nescessary. Is it better to have them in. 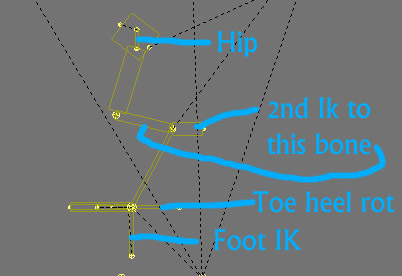