Nice work Atom!
Already imported RealFlow sequence, work’s nice. Are there any limitation’s? I know 4 digits, but something else?
And it doesn’t work on newest blender builds from Graphicall. org. But anyway it will be sweet to have someting like this!

When exporting? There aren’t any dialogue boxes that allow this. Is it in user preferences or something?

Ope! I didn’t think to look around when actually saving the file. I am use to the dialogue box popping up like it use to in the old blender interface. Thanks!

My Last test with mocap files export to .obj

Not working with recent builds. Any chance of an updating?

I currently only support the official release of Blender (there are too many flaky builds out there). As of this post Meshfoot works with 2.65a.

What build and what OS are you using?
What part is not working, can you explain the error?

@driano.ol: I had a chance to pull down the 2.66 candidate and yep, the developers changed the API again. I will correct this when the official 2.66 is released, but if you want to patch your own version and get started now.

You can’t see the list because the API has changed.

So… maybe I’m doing something wrong? But I can’t say what - I do excactly as in tutorial.

Ok, few tips for noobs/idiots like me (probably I’m just pointing out few of my misunderstandings from tutorial):

if filename_0001 is frame 1, then in Meshfoot start frame is 1. Maybe obvious, but I’ve set render range in blender from 0 to 250, and I (as a freshman) expected to set same frame range.

-= 3. FILE NAME (i woudn’t probably lost one day due this one, and two point above wouldn’t be a problem probably). =-

than script will calmy answer to your WTH?! (with milord style) something like: It’s nice weather outside. So it won’t tell you anything.

if you change it to simple

he will say: aaaa… here it is. And you won’t get grey hair.

Path to the filename can be long as Nil river (or at least I had no problems with that).

Sorry for the mess Atom

Great job by the way. I’m your new fan

Hi atom, first of nothing, you are the beast XD!!! Rocking awesome that some one hear our pleas!! and well I have a problem XD…
I’m in a stupid Mac OSx lion 64bits with your script working ok… but I dont see nothing… :’( I scale the object to 2… to 3… to 1000… and nothing… here is my Print screen

best and dude… I love you! 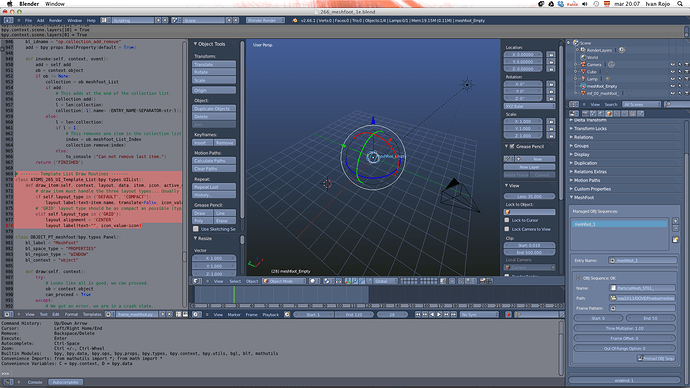 Did you click the Preload OBJ Sequence button for your entry?

You will not see anything until you load the sequence.
What do your filenames look like?
Do they need a frame pattern?

1.-Yes I did click in the Preload Obj Sequence button

This feature would be perfect to be added with the new mesh cache modifier, that way we could manage not only PC2 and MDD but also OBJ which in my opinion these three are the most common way to transfer animations as being cached without counting the alembic format.

Atom!!! it is working, is the name length, now my mesh name is “liquido” and its working, thanks a lot. Really love you! XD :RocknRoll:!!!

Glad you got it working!

I’ll put extending the filename length on the list of todo for Meshfoot. The developers did extend object and datablock naming to 64 character for 2.6. So there is more room for longer names now.

Atom, if you have a try you will notice that it’s very similar to your script, I don’t think Blender has PC2 export format but it has MDD which is also supported by the mesh cache modifier, so the ideal would be to be able to load OBJ sequences and then you can export as MDD and import the MDD again as a single file instead of many. That way would be also good for dealing with importing and exporting models for productions while we’re waiting for the alembic format.

I actually PMed the OP but that I might as well post here too. Though it is clear from watching the video that using different Blender materials works fine in Meshfoot’s OBJ Sequence, I was wondering if this was also the case for hair and fur or if it would only go on one frame at a time?

I have been planning the pipeline for a project I’ve been working on and was wondering this.