I started messing around with creating my own displacement maps and companion AO map. I have included them both in the ZIP file. This is my first serious attempt and I hope to make a few more.

The BLEND file I used to create these maps I pulled down from post #863 from this thread. I used that as a starting place and modified it by adding in squashed thin cc0 shipyard quad based models from the multiple offerings.

With the output from Manuel Bastioni being all quads I just could not resist giving this technique a try on a human model. 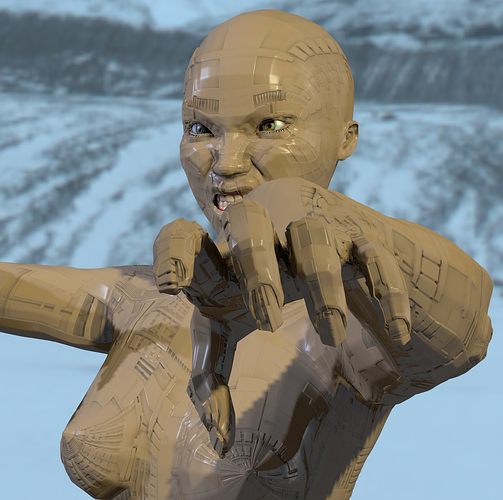 Thats what I tried too, when it came out.
Here are some of mine, over a year old now. 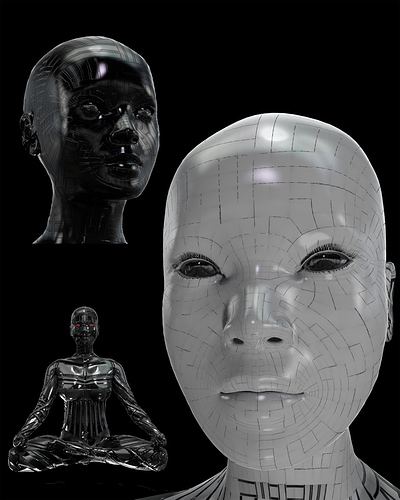 Good to see ya back, Atom,can you catchup with the latest developments?

I have tweaked the displace texture a bit to allow a more fuller range between 0 and 1.I still can’t break the 3x3 sub division memory barrier, however. When I try that Blender 2.78c crashes. 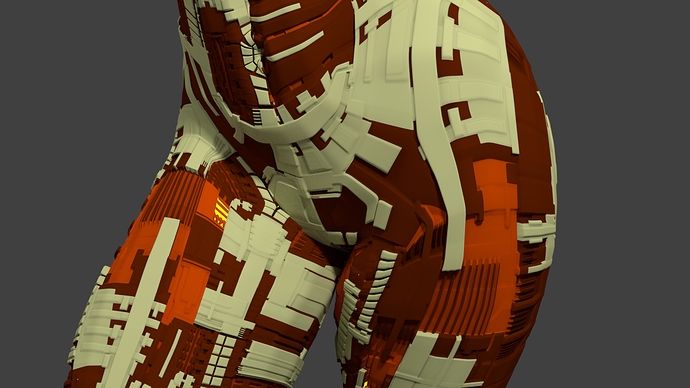 Here is the new AO. 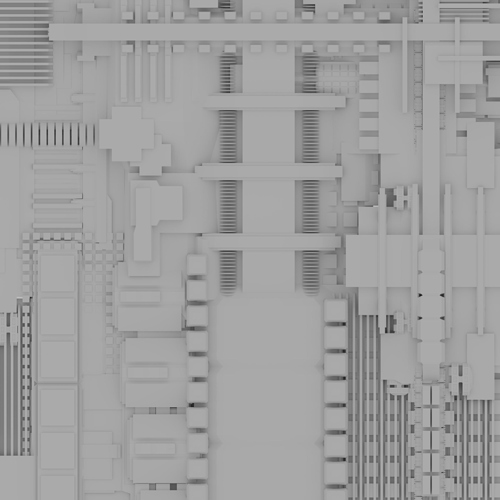 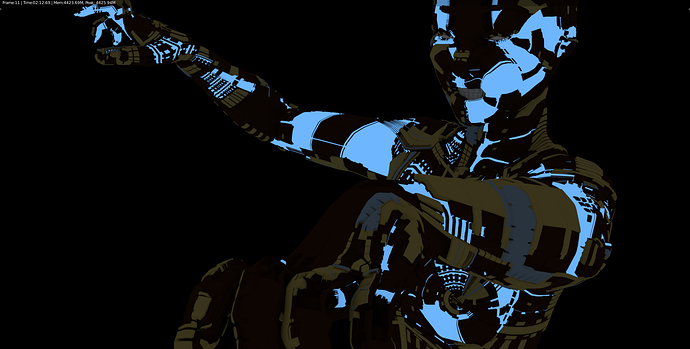 In this image I have weight painted the model. I reduced the weight in the lips and eye socket area considerably. 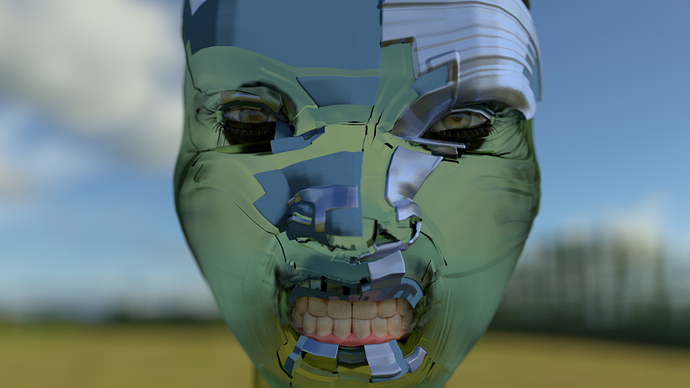 While we’re at it…

Two years ago, according to Imgur. I put together another 4K matched image set for displacement. This one is more column and pipes based. Minimum curved angles and no diagonals are present in the maps. 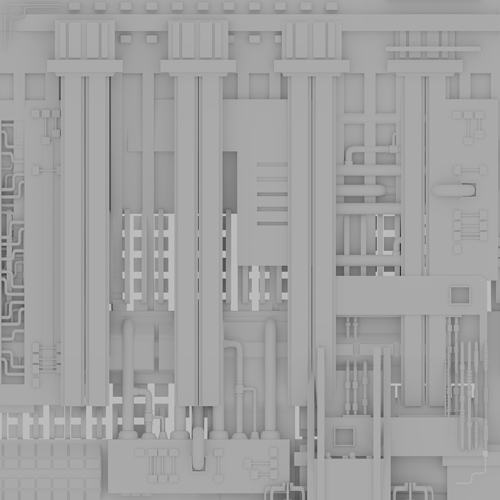 I put together another 4K matched image set for displacement. 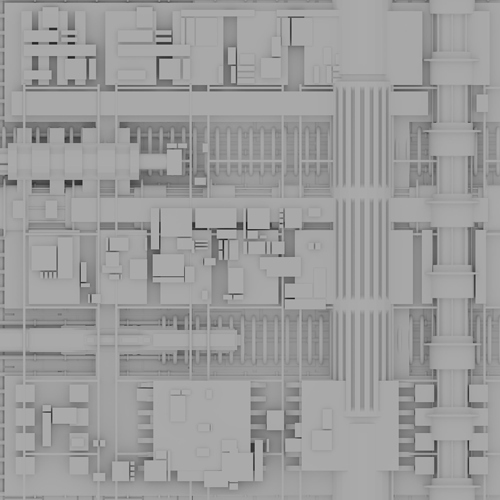 Here is the map in use applied to several objects that make up the Phaser. 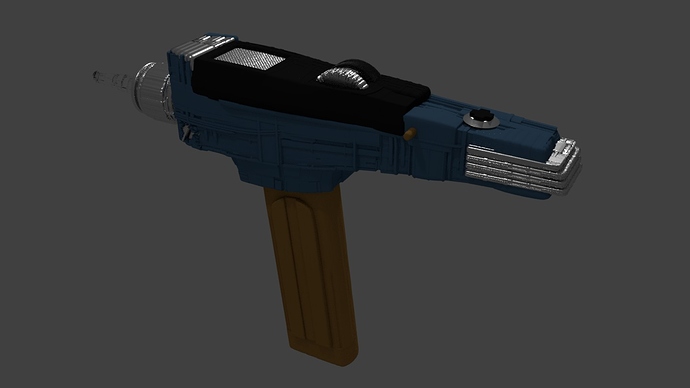 And the classic sphere using the new map. 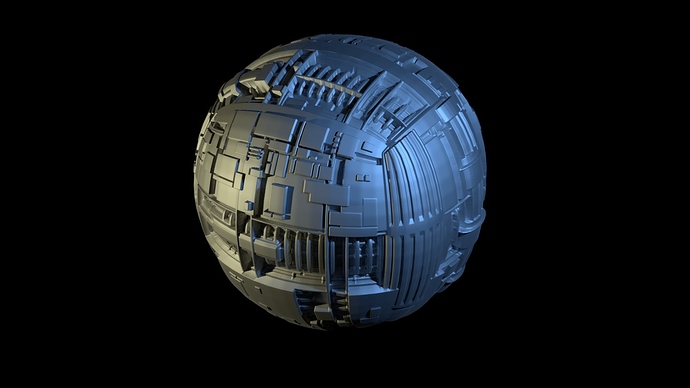 I applied the latest map to the Stanford Bunny posted at this link. 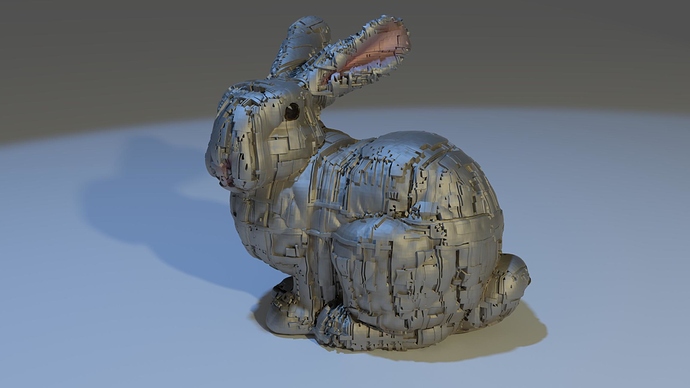 Here is another 4K matched image set for displacement that is more pipe based. 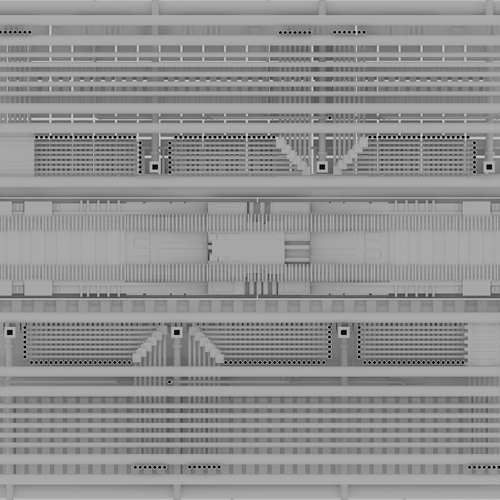 Here is the rabbit using this pipes based displacement map. 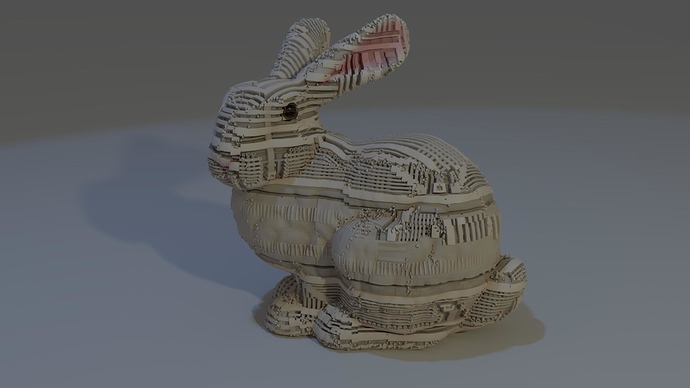 @Atom, you had been a little absent in the forum lately, right? If I remember correctly, you had shared nice stuff with the community before, thanks for that. And thanks for these new displacement maps.

A question guys, do you still use the old method with Displace modifier for this? How does this work with Cycles Microdisplacement?

Hi there, just wanted to share a window build with the new Cycles microdisplacement. Edit: the feature is already into master How to use it: Cycles as render turn experimental in render button In the subsurf modifier check Adaptive In the...

I still use the original method leveraging the displacement modifier. Mainly because I typically export the result as a mesh for further processing in other packages. 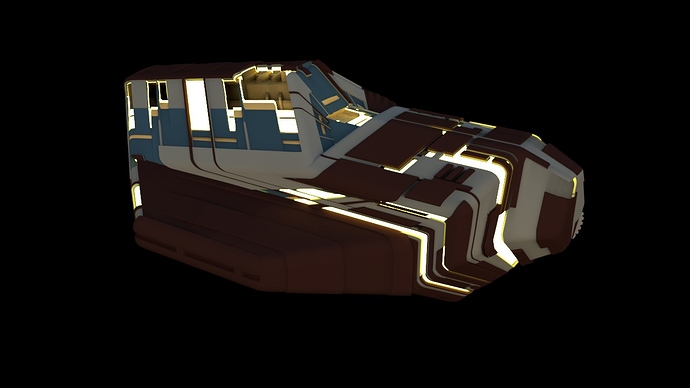 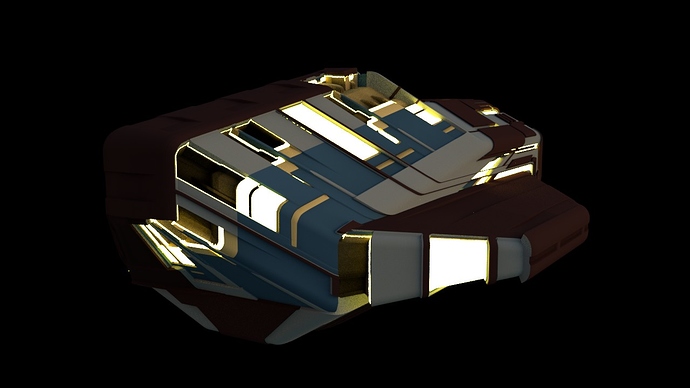 And a revision with a little more attention to UV layout. 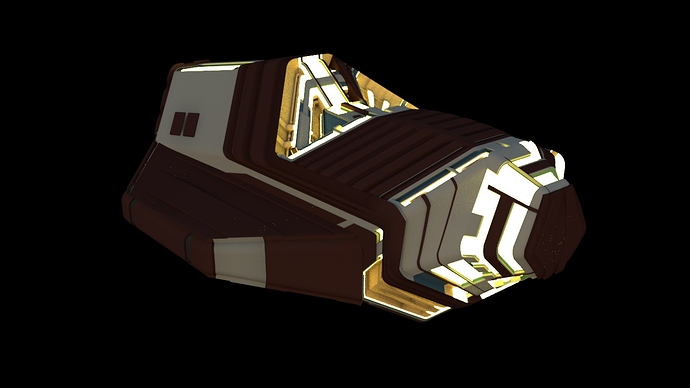 I created a variation on the 4-color by height concept. In this material there are 4 shaders by height. Use the Greater Than Nodes to dial in color areas based upon the displacement map height you happen to be using. I also added a psuedo switch to a few shaders so you can quickly switch from diffuse to glass, emission or glossy. 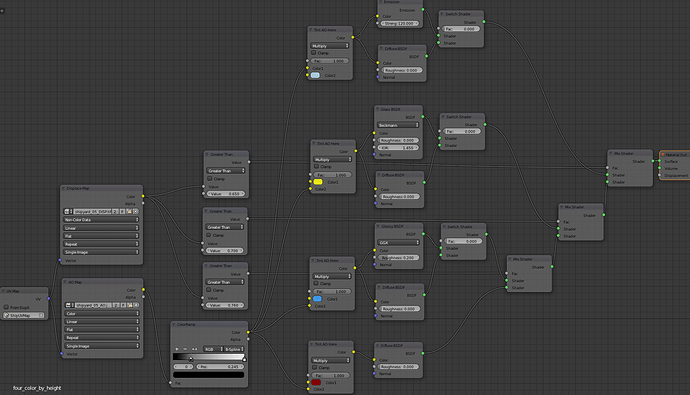 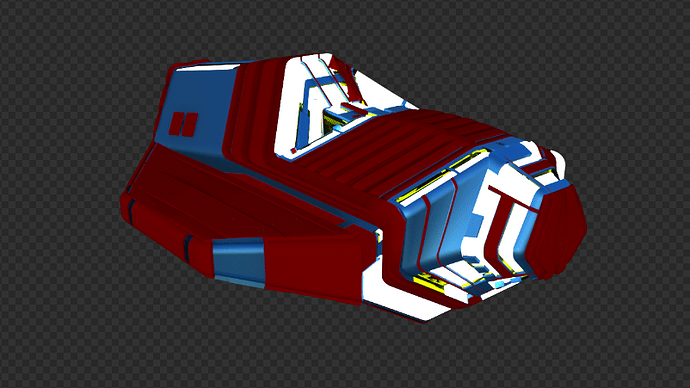 Lord have mercy is this a cool technique. Anybody know how to get Maya or Modo to set-up UV’s the correct way for this?!

I still use the original method leveraging the displacement modifier. Mainly because I typically export the result as a mesh for further processing in other packages.

Here I have tried the new Displacement node available in 2.79 master/buildbot with Bunny and map from message #1592:
https://docs.blender.org/manual/en/dev/render/cycles/materials/displacement.html 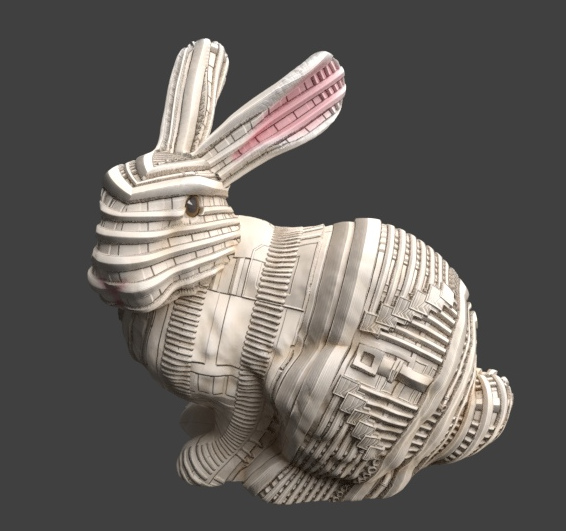 This version with a bit of Random Walk SSS: 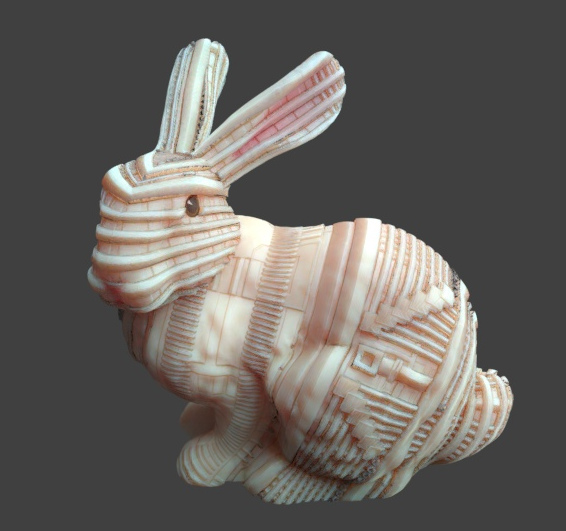 I have used three levels of subdivision in Subsurf modifier, higher value fills my 15GB RAM and blocks my PC (slow disk for swap memory). I am using displacement node and Bump node (I do not even know if I am using the nodes correctly :o)

Looks good. I like the SSS version a lot. I do run into physical memory limitations using the modifier version sometimes.

A question guys, do you still use the old method with Displace modifier for this? How does this work with Cycles Microdisplacement?
https://blenderartists.org/forum/showthread.php?396697-Cycles-new-microdisplacement-testing-discussion-and-blend-sharing

In general microdisplacement is great and is the better method to use with Atom’s textures, as they still have a few objects that don’t work good with the “old” method.
(They’re great, though, and I’m happy someone else is still out there making those.

)
However, the kind of usage michalis had in mind has issues with microdisplacement, as it can’t “stitch” the object together at places where the UV-Map isn’t connected.
I don’t have an example ready, sorry. But it’s easy to test.

What works great, though, is to combine both methods: 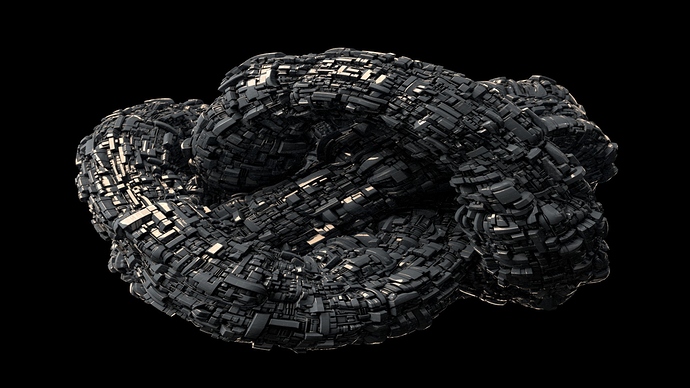 Lazy object and almost no “loops”, I know. Sorry.

Hi, maybe someone can help me… I want to create a cool looking realistic canyon in blender. I want to paint my own displacement map so it has a unique terrain.

So I painted my own displ. map 3000 x 3000 px and saved as .png (see above). I subdivided the plane 12x. I unwrapped plane and I did micro-poly node setup and settings in Blender 2.78 for micro-poly displacement as per a tutorial.

Problem: When I apply the displacement map to the plane it looks inferior. Anyone have ideas what I am doing wrong? Is the disp. map too small? Do I need the map to be larger like 5000x5000? 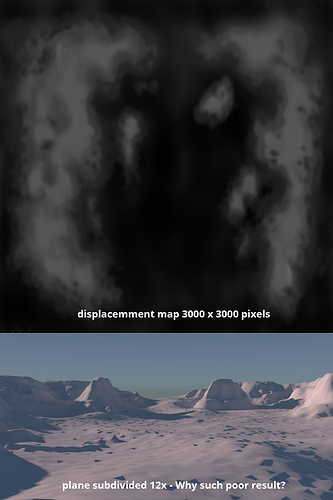