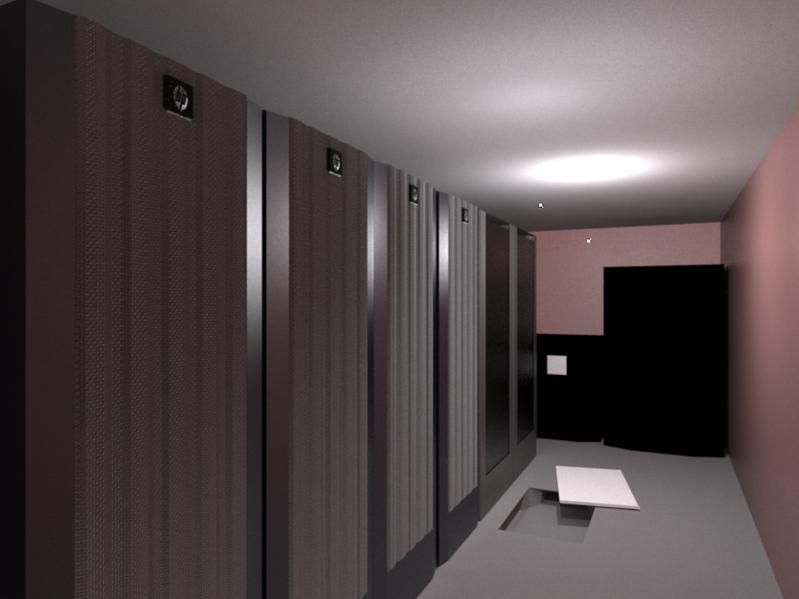 This is for a server-room relocation project I’m involved in (the 3d side is just me playing at home, thought it might be a fun project!)

Modelled in Blender, Rendered in Luxrender (about 7 hours), no postpro yet, any comments critique or thoughts on any aspect welcomed

Looks good overall, but maybe you could put some more effort on textures and such?

It does look a bit spartan on that side… How’s this coming along? (6 hours rendering) 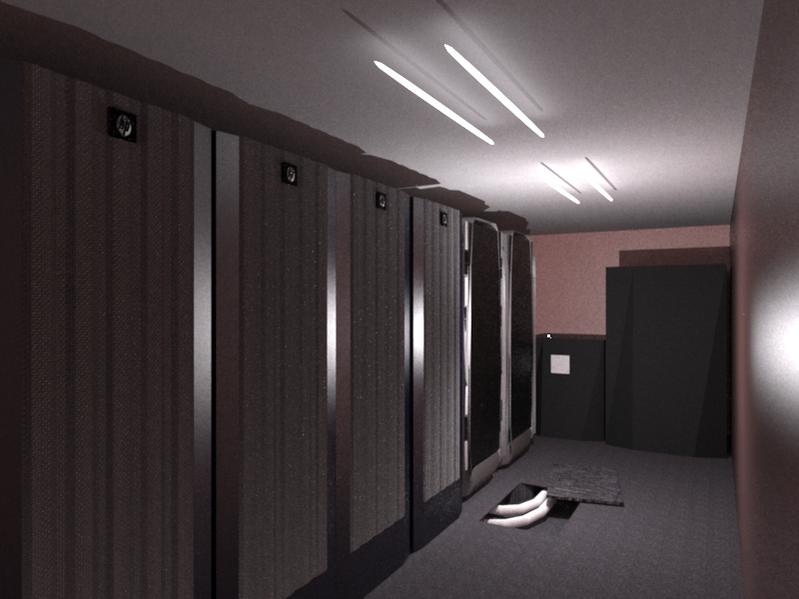 Servers have blinking lights behind the panels. They also have conduits that go up through the ceiling for cooling rack purposes. You lights need housings, nothing just floats there like that.

Behind glass because that area is air conditioned to the max.

Thanks for the points, I’ll definitely look at the 1 and 3

Light housings: I need some inspiration from the real ones when I get to work, and blinkenlights are a great idea, but need to work out a way to fake it without having to make the front of the racks semi transparent; that might be a nightmare.

They’re based on racks we own, so I’ll have a look when I get to work and see how much light actually gets through and what is looks like. maybe upload some reference shots if I need help.

This also explains the lack of conduits for aircon; we’re cheap and use standard office style wall-mounted air con; which isn’t visible from this angle.

Ah, just been to look at a rack and the doors are nearly completely see-through… so I’d need to render pretty much everything in the rack to be true to life; cant just illuminate it from the front or draw on spots of light… I think I’ll leave them opaque for now; the purposes of the image are mostly architectural and we don’t need to communicate the technological side to anyone else. Maybe I’ll come back to the servers later.

I’m planning on a low-res version that can be viewed interactively/realtime in the game engine (openable rack doors, liftable flooring, correctly ran cabling etc.) as a complete model for layout etc., but modelling, texturing and lighting each server accurately will be a bit too time-consuming for me at the moment; and I wouldn’t know where to start on making the thousands of tiny holes in the surface of the door!

Thanks again for the pointers; anything else is welcome as I will be continuing to work on this; with the assumption that we can’t see in the racks (for now!) unless anyone has a clever idea on achieving that effect relatively easily’ will get some reference photos up later.

texture photo modeling - unless you’re going to allow for very close viewing of the racks, you can go a long way with photos of the object, suck onto a lower res model - such as if you have a pc box, youd have the box shape, and if there was any funky large cutouts you would model those, then take a good photo from the front with a little shadow casting as possible, then front project the UVs, attached the image as its texture, and render that. works quite well if you take the time to sort it out, and its faster than trying to accurately build everything.

lighting - the lighting you have at the moment is extremely unconvincing. you need to take note of where the actual lights in the real room are, and then copy it. theres no visible light in the very centre of your scene, but all the specular hotspots say there it. this is glaringly wrong. the second image has tube lighting, which is much better, but they clearly arn’t lighting the scene. you’ve got a lamp spaced in the middle of the rear set, and ive no idea what in the closer set. get some area lights exactly the same shape as those tubes, or investigate emitting materials in luxrender.

luxrender - my god thats slow! six hours? at that size? with those materials? theres some serious optimisations you can do for this scene im sure. but you’ll have to read through the lux manuals to get somewhere. i only know yafaray so can’t suggest anything

materials - the hotspots you have on the walls are some unknown realworld material. turn the spec way way down, and either photograph the real wall for a texture to put on it, or get something off cgtextures.com its screaming out for something more than a simple colour swatch /high spec

reference - i would highly recomment taking some photo of the scene - expecially one from a similar view point as your render, so when you’re working from home you have a clear picture. memory is usually pretty poor at details, but usually gets the overall picture right. so you’ve probably got a close scene, but theres al sorts of stuff different… are there light switches? power sockets? leads and cables that are lying around not part of the work you’re doing? how about junk on the tables? skirting boards?

i think you can make something quite respectable, and you’re half way there, so just keep at it.

Wow, lots of excellent pointers, thanks so much for taking the time to put it all into writing; inspired me to keep on going. Too much to comment on now so I’ll reply with future renders (1000 words and all!)

The only thing I will say is that the 6 hours figure is ‘left on overnight’ so it might have been around that level of quality for some time; but unbiased renderers do take a heck of a long time to render (but I find them much easier to get good quality picture in the end; the workflow just suits me, and I have plenty of spare cores laying around to render on