Setting a material's physics so it is a ghost - how to?

I remember in UPBGE 0.2.5/Blender 2.79, you could set a material so that objects do not react with it by disabling the Physics checkbox. This was removed with the EEVEE redesign, and when UPBGE transitioned to Blender 3.0+.

The question, is how can I set a certain material’s physics in my scene so that it behaves like a ghost, rather than full on reacting with the objects hitting it? This would be useful for spiderwebs and tree leaves, and save on CPU/GPU because you don’t have to draw/process all the duplicates.

To my knowledge, there’s no longer a toggle Material Physic setting in UPBGE 0.3+.

Hypothetically, and I say this hesitantly, you could attempt to run a:
Separate by Material operator (Edit Mode → P → By Material) at runtime.

Then parent the newly created separate mesh object to your original mesh object.

Why did they take that out? Hopefully a similar feature can be put in someday… 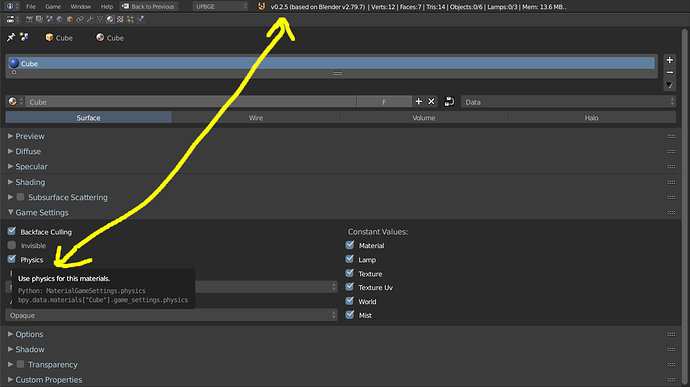 Ah, right. I was thinking in friction (it was moved to object).

from what i remember, everytime i tried it, it didnt really work anyway. could be an edge split issue, but some faces ghosted correctly, and others wrongly.

(it was moved to object).