Someone on freenode’s #blenderaid wondered why Blender doesn’t have a batch rendering thing like in 3ds Max, so I wrote one myself. It allows setting up multiple render jobs to be done in sequence. For example

Tell me what you think and if something else is needed.

To install, place the script in blenderdir/2.65/scripts/addons, go to user preferences -> addons -> render and enable batch render, click save. The tool is now available at the bottom of the render panel.

Current features in version 1.3 for Blender 2.68a: 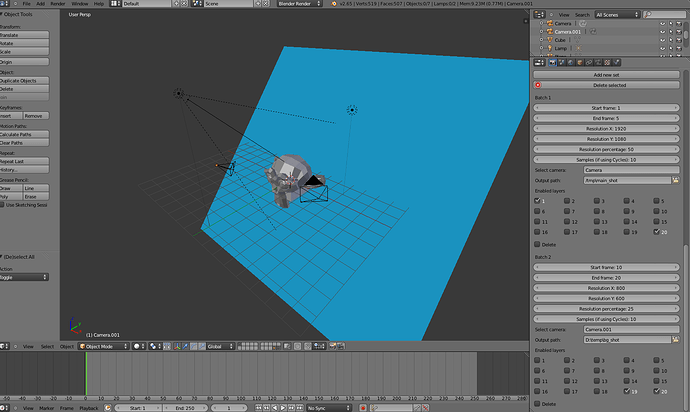 I’ your fan. Very useful tool (also for 3ds max user in past) Thank you man.

This is exactly what I was wishing for! Thanks!

I haven’t tried it yet, but I’ve been hoping for something like this, makes it great for overnight renders for animations. One other thing I would love to see implemented, is a way to have it do an automatic shutdown of your computer after the batch process is complete. I have a backup program (Acronis) that shuts your computer off after completion of the image, so I know it’s possible do…

Thanks for putting this together.

Fixed the bug with deleting items (in github). Looking at the other features. Thanks for the feedback.

One other thing I would love to see implemented, is a way to have it do an automatic shutdown of your computer after the batch process is complete. I have a backup program (Acronis) that shuts your computer off after completion of the image, so I know it’s possible do…

Possible, but I don’t want to do that. It sounds like a security risk. From what it seems it’s about two lines of Python to add that, but I’m not comfortable about the script doing that sort of things. If there’s a bug in that feature the computer might be shut down against the user’s wishes.

Well you would know best if you feel it is a security issue, one additional question I have is… say that I have an animation that has multiple cameras set up to be the active camera at different points of the timeline. So if I want to render 2 sequences

would this make your addon not able to be used? 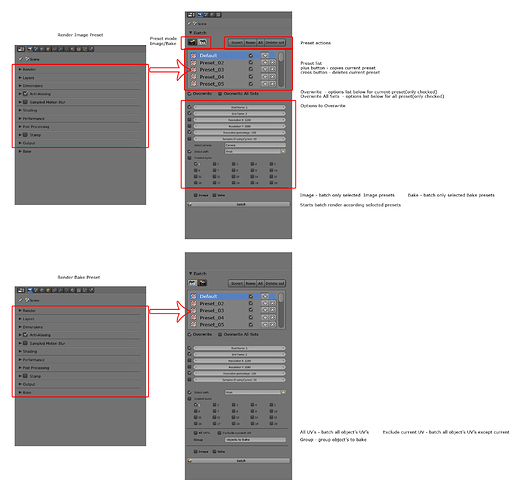 P.S. Sorry for my english.

say that I have an animation that has multiple cameras set up to be the active camera at different points of the timeline. So if I want to render 2 sequences

would this make your addon not able to be used?

I’m not sure how this is usually done. Can you set keyframes for cameras? I know people have set up some kind of scenes where the camera is changed at some point. My script won’t override that - it simply changes the active camera at the starting frame, and that is ignored anyway if there is a keyframe overriding this change.

Well formatted and thought. I’ll think about these.

Hey Gekko, to reply to the question you asked

But it sounds like that won’t be a problem with your script.

This is easy fix, I just removed = from this code 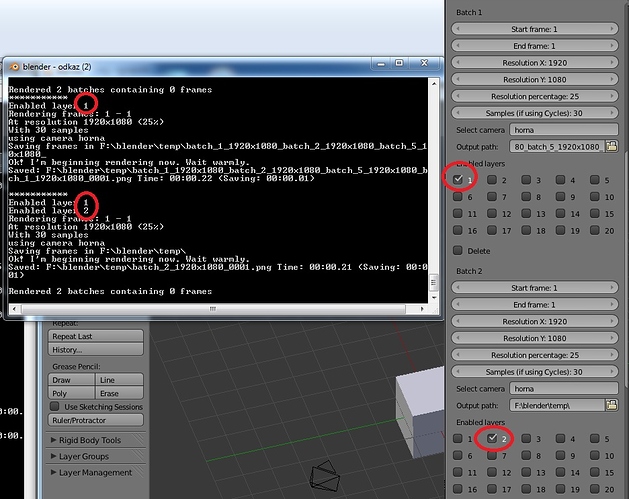 in second batch, layer 1 is rendered even though it is not enabled.
I tried to fix it by myself, but it somehow complicated (I have never worked with python before)
I will be very grateful if somebody can fix this.
harleynut97 (harleynut97) April 25, 2018, 3:18pm #15

Normally I always render PNG image sequences. Lets say I set up a batch render such as this:

Are you able to tell the add on to output image sequences for render 2 in a seperate folder, than what was used for render 1?

It probably is too early to say, but do you know if this works OK with the 2.69 official version?

This really is a great addon, and thanks for all your efforts.

-At least in my basic tests it works with 2.69… but I only used 1 layer. Redw brought something up a couple posts back that may in fact be occuring… hopefully Gekko will look into it.

-What I was really wondering about is how this would work if you were to use multiple cameras with automatic switching during these batch renders. I noticed on the add on it has some type of camera setting for each batch. But I just left that alone and basically set up a two areas for rendering on the timeline

It rendered each image sequence with no problems, and did include the camera switches with each batch,.

I did find out that you can have it output the batches to different folders which is great and needed for what I want to use this for.

One thing really did throw me off on this plug in … After hitting execute batch render button (or whatever it was called). The only thing that you see (in windows) is the blue circular arrow that you see when Blender locks up. I actually thought this is was happening at first. But as it turns out it was actually rendering.

I would suggest to the developer to add some kind of progress bar or something like that while each batch is rendering to avoid confusion to the user.

So just thought I would share this info. This is going to really help my ability to overnight renders of more than one scene at a time.

It is possible to add render layers to this addon ?

It’s really usefull, but without render layers it’s too limited.

I guess Oscurart Tools would solve that task.

You make a linked Scene for every Camera.
You can set individual Rendersettings for every Scene.
In Oscurart Tools you can set a Checkbox for each Scene you want to render.