the first object follows from the ‘start’ point on the path, but so do all the others!
think train tracks with cars/carriages on them.
how do i do this - simple prefered!
thanks

The easiest way I can think of to do that is using the constraint follow path, combined with a limit rotation to keep the front of the object facing the same direction.

thanks
i tried the train cars1 blend and it did nothing in 2.69.
so i tried to parent it to tthe curve and it starts okay then goes wild!
This is very close to working for me.
can it be updates in 2.69 to work right?
thanks

It works in 2.69. You do not want to parent it to the curve, you just need to move the plane named ‘Train’ along the x-axis. Train has a curve modifier and will follow the curvature of the bezier curve.

I recently made a snake do this.
For each sub object delayed the offset keyframes.

Now that DEFINETELY has potential!
For each sub object delayed the offset keyframes.PLEASE EXPLAIN
i am unfamiliar withh most of blender!
thanks

Looks like this could work.
please tell me how to remove the pile up at the start and beginning!
without that and it will work.
why a nurbs track rather than the curve thingy?
thanks

‘why a nurbs track rather than the curve thingy?’
I dont know.

‘please tell me how to remove the pile up at the start and beginning!’
The path can be changed to Cyclic in edit mode, 3D View tools, which will make it loop.
This is the same as using a looped curve.

Though if you do this, turn off the constraint property ‘Fixed position’ for each object, and add keyframes to the constraint Offsets again.
Then the offset keframes will have to be reanimated again.

This kind off setup does take time setup.
Its best to edit keyframes in the graph editor. Or add them one by one correctly on the correct frame.

There maybe a easier way todo this.

thanks
i don’t understand it but will give it a try.

as you see with your help i have the train cars ok.
but at the start and end they all crash together.
i looked in the graph thingy but all cyclics were greyed out.
what do i do now?
this is the last bit to solve.
thanks 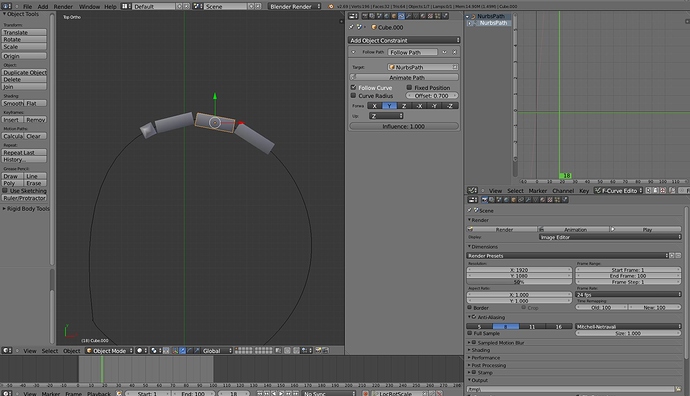 First, important question, do you want the train to loop, or not?

When the Path is Cyclic, this means its connected at the ends, better for loop animation.

The reason the snake/train bunches up at the end, is the way i set the keyframes.
With keyframes, it was easier to make them all start at the start and finish at the end.

If you dont want to loop the train, and you only want it to go once round the track then stop, you should be able to tweak the keyframes, at the start and the end for the objects, in the graph editor.
Though is messy process, you will have to be a bit perfect.

well this is so close to working…
loop or not does not matter.
i used the number thingy to space them apart from each other. that is all i know about it.
the bunching up at the end is a definte NONO!
not knowing how to set key frames etc I key… is there a right way.
thanks for your great help

problem solved. i put the start/finish where they collide out of site in a tunnel!
thanks all