So I’m a crazy man who’s gotten tired of not actually finishing anything and so have decided to try making little, fun-packed games in just a week per game. Each game will retail for a very low price as well (not sure of the specifics yet; might vary per game). I won’t necessarily make a new game EVERY week, but that’s the goal. This (Shakecan Games) is the label for those games. So you know that if you’re getting a ShakeCan Game, it’s gonna be simple, quick, and cool. This doesn’t mean I’ll drop any games in production; either they’ll be paused or worked on in tandem with Shakecan Games.

This one’s gonna be inspired by Pocky and Rocky for the SNES. There’ll be two characters (who might control differently if I have the time to implement it), optional co-op gameplay, and lots of hectic shoot-y goodness. The game already generates a level layout randomly, which saves me time on creating levels. The plan is that when you explore the levels to a certain percentage, it’ll choose whatever room you’re headed into as the “action room” and spawn a boss in there. You’ll explore the level, beat the boss, and then head on to the next zone. Pretty simple overall.

The camera tracks to the middle of two existing players if there are two; otherwise, it’ll track to just the one active one. I’m going to add a big invisible wall around them to keep them from walking off away from each other, though I guess view splitting could also work (so that when you get far away enough, it splits into two views for each player). This could open up interesting “separation” game mechanics (where the game separates you until you press a switch or fulfill a condition), though it also would make bosses impossible (unless it warped the absent player to the cell of wherever the boss is). Definitely stuff to think about. 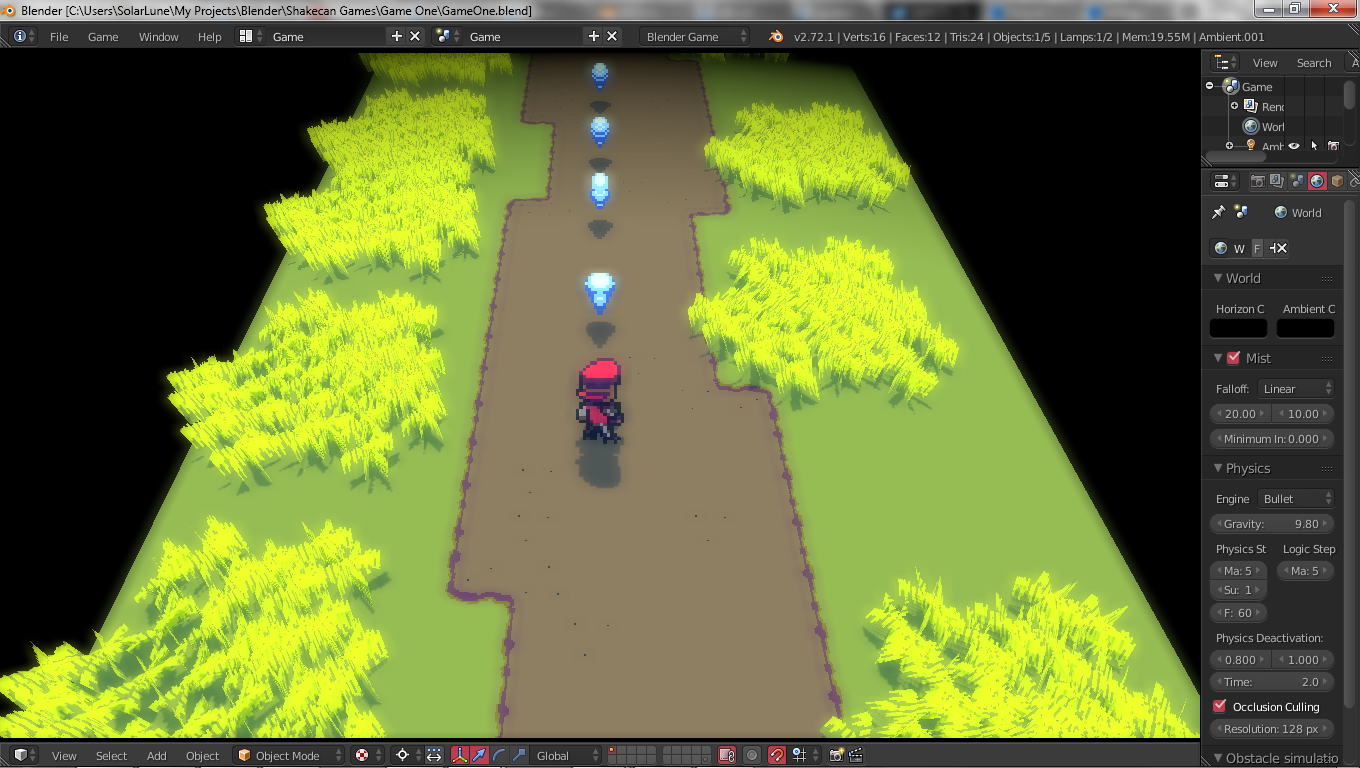 Anyway, this is basically all I’ve got for day one so far. Thanks for reading!

OMG u do make game basing on Pocky and Rocky XD please keep doing this! It looks cute! Make the racoon too please!

Hah, thanks. I don’t think a raccoon will be in this one, but there will be two different characters for each player.

Welp, I had a ton planned today, but didn’t get much done, unfortunately. However, I did manage to add some particle effects and tweak the game to work effectively with two players (now they can’t get too far apart, or else they’ll stop moving).

Tomorrow’ll be enemy time, I think!

Instead of using an invisible wall, you could do something with the summing of vectors, so that:

So that if you get too far away from your friend your keyboard input will be slightly over-ridden by a force pulling you back towards them, and they will also get the same force pulling them back. Once the players are closer together the corrective effect is reduced to nothing. If you’re nearly leaving the screen your controls will be completely countermanded by the corrective force and you’ll start moving back towards each other.

Because the force would be applied equally to both players you wouldn’t get a feeling of being dragged along, only that as you get further away movement along that vector becomes slower until it eventually becomes impossible.

Animation wise you’d need to get your animation data from the final movement vector rather than player input.

I think the lower camera angle looks better too, and the more orthographic view is an improvement.

Keep up the good work, I’ll be excited to see a finished game.

I’m still trying to find a good camera setup, myself; can’t be too close or it’ll be too annoying to have enemies show up off-screen. Can’t be too far, or the details can be lost. I’ll keep balancing it, I suppose.

The first enemy type and formations, this time. I can create the formations using groups in Blender, and the enemies will spawn in in the same relative positions as where I placed them in Blender. A basic particle system’s working, but no explosions or anything “cool” like that yet. The enemy itself is a basic “float forward” kind of enemy; easy to dispose of, but they come in heavy numbers. 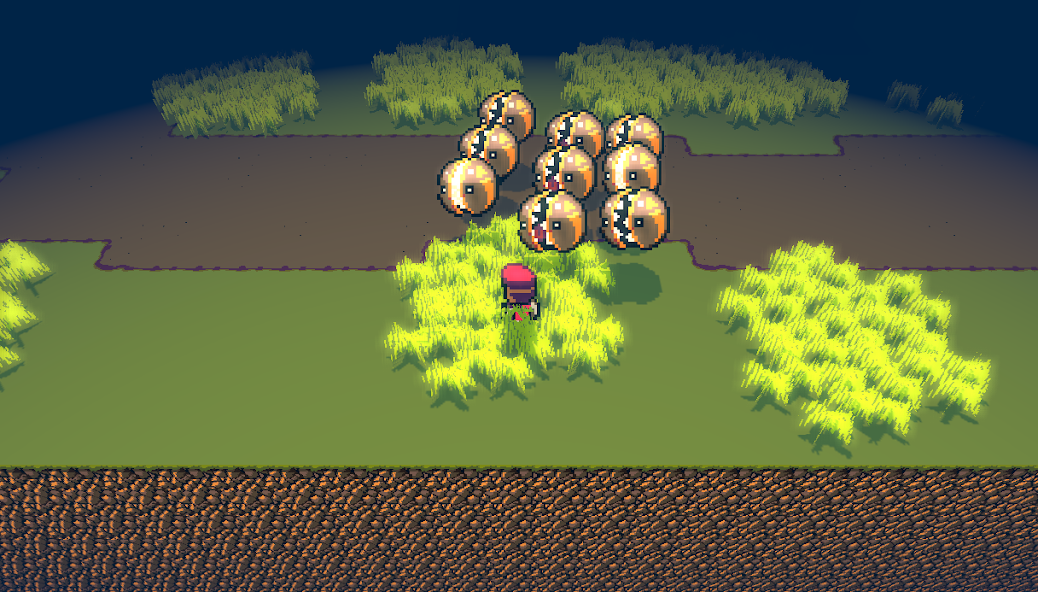 I did manage to do some tweaks and finished another enemy, but I’ll have to pick up the pace if I want to finish sometime this week (I technically should be done somewhere between tomorrow and Wednesday, but whatevs).

I made this yesterday, though, which sounds pretty awesome, I think.

Do you libNew for each sprite? or how do you make it so their Uv animations are not linked?

Yeah, I use LibNew(). I could also have made planes for each image in the animation and then used the Mesh version of my sprite map to animate them.

I did manage to do some tweaks and finished another enemy, but I’ll have to pick up the pace if I want to finish sometime this week (I technically should be done somewhere between tomorrow and Wednesday, but whatevs).

I made this yesterday, though, which sounds pretty awesome, I think.

the soundtrack is a bit unclear with the melody , but its rhythm is nice

OK, so I’m almost done with the first game.

I implemented the GUI yesterday, and got a few subsystems working. You can die now, and you can take damage as well. Come to think of it, I probably should have implemented this stuff way earlier, but oh well. I’m already way over-due (it should have been done on Wednesday, and it looks like it’ll stretch on into the rest of today at LEAST), but I’m glad it’s pretty much done. There’s not much to it, but that’s kind of to be expected, and I think it’s okay that it’s light on content. 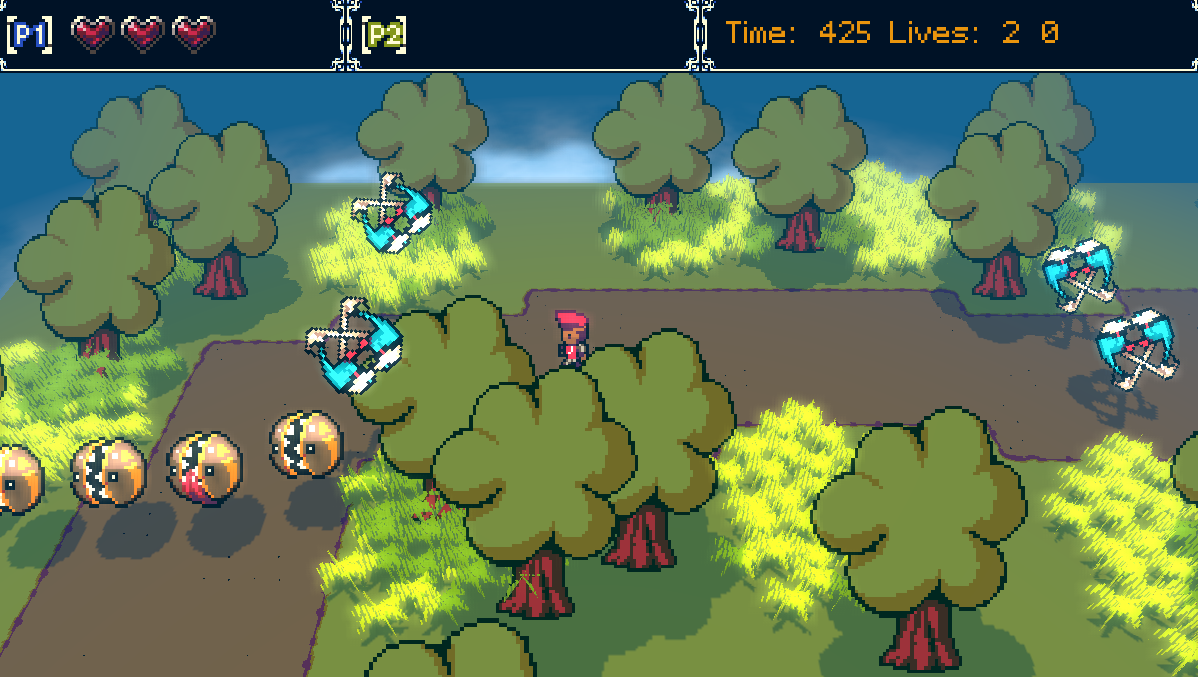 Like I probably mentioned already, I’m planning to sell these games I make in a short time for a low price (just a couple of bucks, I think) to see if I can make enough to work on them full-time. For a game made in a week and sold for a couple of bucks, it’d only take a couple hundred sales to make it worth it for me to continue working on them. I think this would be preferable to Kickstarting a game idea or something, since the price is way lower and people can see your track record in regards to creating products. If they like an idea, they can wait a couple of days to see it realized, rather than waiting months to see an updated demo of a to-be-released (maybe) product.

Glad to see a finished project! (:

I don’t know about you, but to me, it feels a lot easier to finish a project with a clear end goal - since you know what you’re always working towards.

I’m tempted to buy your game, just off the screens, but it really depends on the price.

Hah, that’s encouraging, thanks! I’m done with this one, fortunately!

Here’s a video showing it in action.

Here’s a link to the game page itself.

I’d be interested to see how that business model works out. I’ve found that i can make a fun game in a week, so if i could actually sell it for real money I’d be super happy.

I waffled throughout the week trying to find a game I could make, and finally decided on this just today or yesterday or something. The next game is going to be a Lode Runner-like called “Lodemen”. Side-scrolling, puzzle maze game. You can dig out pieces of the ground next to you. Co-op in Lode Runner games was really fun, since you couldn’t run through each other, IIRC, and you could stand on each other, making co-op puzzles different from single-player ones. I’m planning to implement some co-op mechanics and hopefully make it unique through a few other mechanics if I can work them out effectively. I’m using the BDX engine (which is still unfinished and just a pre-alpha) for this. Hope it works out! 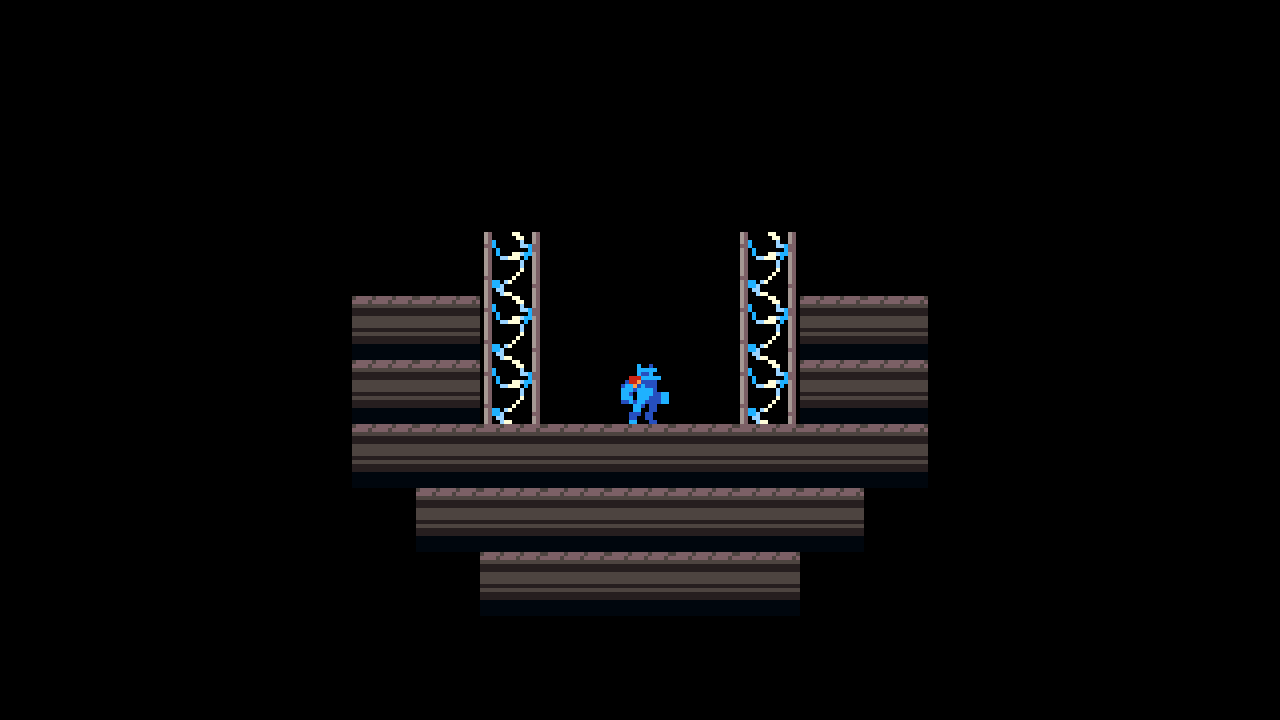 I’m still watching the video, but:
GOOOD JOOOB, buddy! You’ve done it!
Ooof, I feel motivated now! One can actually finish a game!

I dont have a paypal, is there another payment method you can put on there where you just put in a credit card number and done, without having a paypal account. My current cards are linked to my wife’s business paypal account so I cant do it through paypal, however I can use the cards to make purchases.

Did you ever play the lost vikings?

The Lost Vikings is a puzzle-platform video game developed by Silicon & Synapse (now Blizzard Entertainment) and published by Interplay. It was originally released for the Super NES in 1992, then subsequently released for the Amiga, Amiga CD32, MS-DOS, and Mega Drive/Genesis systems the next year; the Mega Drive/Genesis version contains five stages not present in any other version of the game. Blizzard re-released the game for the Game Boy Advance in 2003. In 2014, the game was added to Bat In Th...

That was Damn fun and used a similar setup, but you change between three players,
Two humans, and one ai, or one human and two AI. I think, it’s been a while…

@super - Nah, sorry, not unless I set up a new / different storefront using something else. If Itch.io doesn’t support it, I can’t add it in there.

Didn’t get much done today, either, unfortunately, but I’m pressing on nonetheless. Got ladders working and a basic enemy entity moving towards you. No animations or anything yet, though. 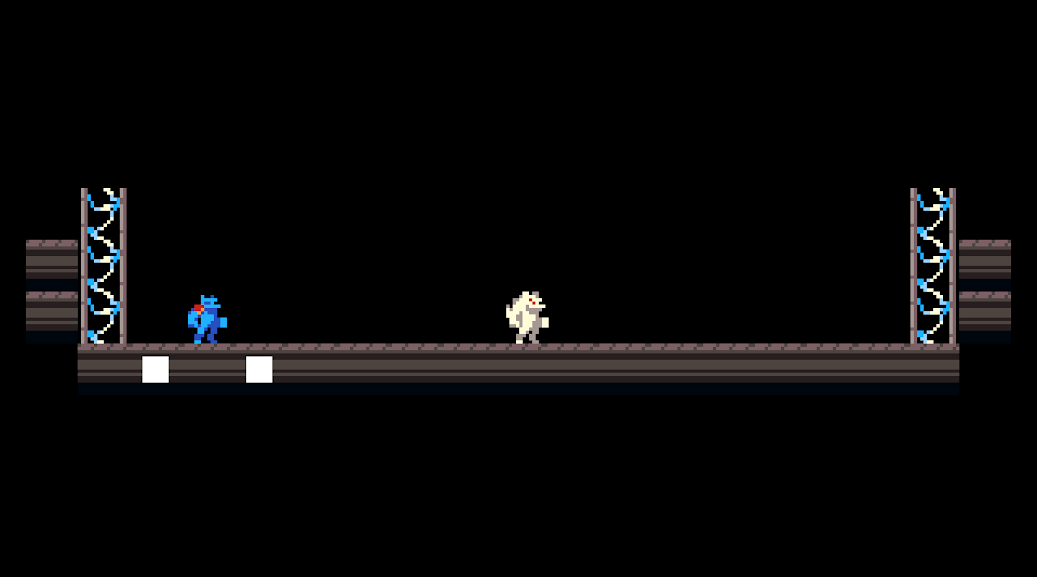