Hi, I’m new to blender. before I get into the problem I’m having, let me give you a little background about my skill sets: in addition of physical media painting and drawing, I do photoshop and vector graphics design (learned in Illustrator, but I actually prefer Inkscape). so I’m not a complete babe in the woods… except in that this is the first time I’ve seriously attempted to learn 3d design. my intention for this is to design papercraft models, so you will find that modifiers such as subdivision surface, or fully rendering images aren’t very important to what I’m trying to accomplish.

so on to my problem: I’m working on a model of a Harley Davidson motorcycle (so far strangely easier as a learning experience than the corvette I attempted and failed at previously). I am building the fuel tank, which I’ve extruded and shaped a plane that forms a verticle loop. so far that part is parfect, and I have no problem there. except my plan was to take that shape and eventually connect it to a flat oval disc on the side of the tank. I’ve got the edges stepped down in subtle angles to the point where I’m ready to connect to the disc, and now all that rmains is to join the two shapes. I assumed this would be easy, but it is not. is there a function to join an outer shape to a center shape, when both have a different number of points?

ALTERNATIVELY: can I flatten several selected points on an axis? because if I can do that I can dispense with the separate disc entirely, extrude out the side, flatten it in the y axis, and form the disc out of that, and then that I know how to join at a center point. it’s just that I’ve fine tuned the edge so much that it’s not flat on that axis, and it’s vital that the thing terminate at a perfectly flat side face for papercrafting purposes.

thanks in advance for any help you can offer!

here’s a screenshot of what I’m dealing with: 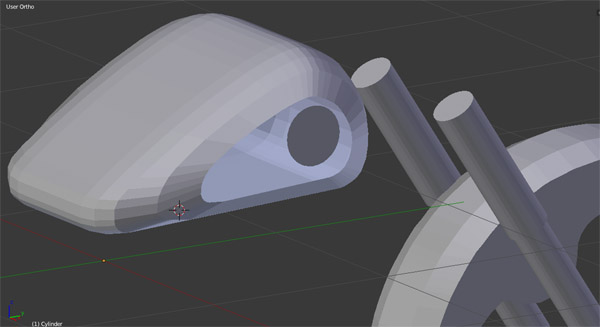 is there a function to join an outer shape to a center shape, when both have a different number of points?

There is, but in every case it is better to have the same number of points. Without the same number of points you can appreciate that triangles will have to be created. Depending on your version no. (which you should mention in any post) the tool would be Bridge edge loops.
The highly recommended LoopTools addon has a similar feature which does a cleaner job. Enable it in your user preferences. It also has an excellent flatten tool to answer your other question.
You are a new user and new to the forum as well so you should definitely take a look at this post by JA12 to ease your way round here.

much later edit: OK, I see you have managed to add an image to your previous post. Unfortunately it doesn’t clarify the problem as such.

If you have abandoned the stepped approach and now just want to flatten you can try various scaling to zero procedures that usually work to flatten a group of vertices if you choose the correct transform orientation.

Since I am unsure of what constraint you are working with to make papercraft - does it have to be composed of planar faces only? I can’t really offer any good advice at this point. I am probably the only person who doesn’t know what papercraft is, but there you go…

thanks, I’ll try Loop Tools. is there any particular reasons triangles are frowned upon? I see them used a lot in papercraft design, and can see them being useful for simplifying polygon count.

For your purposes triangles are best because they are always planar.