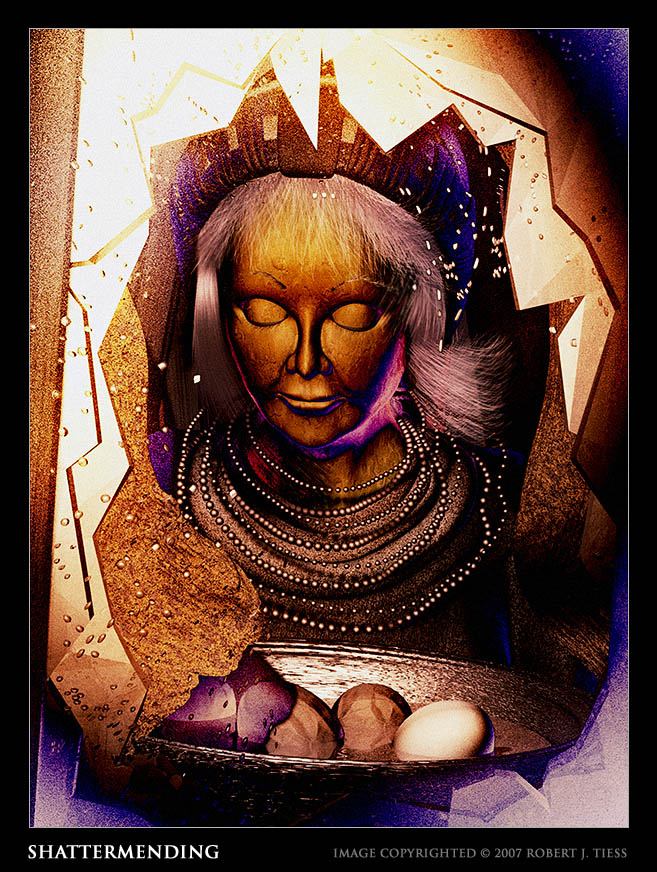 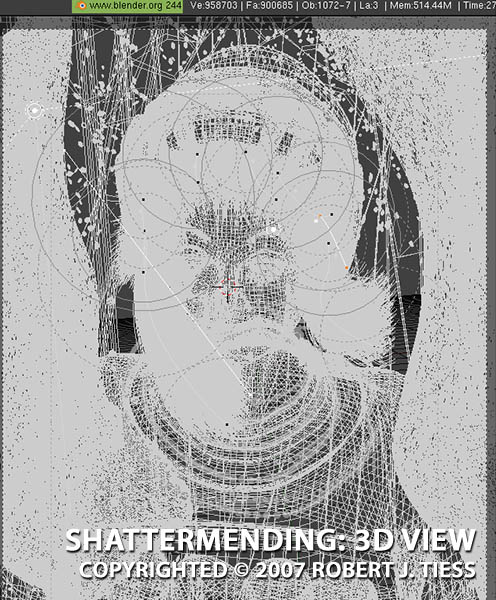 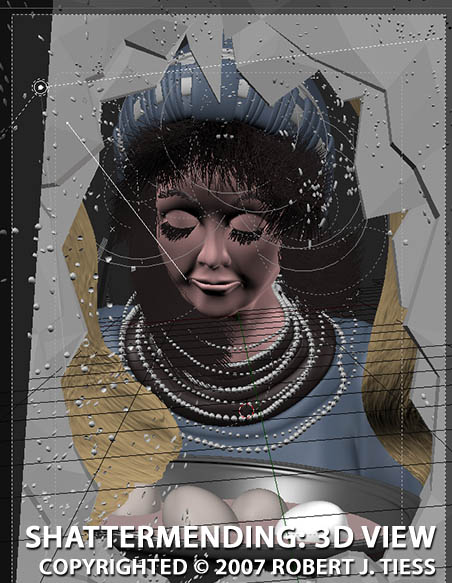 Not your best, but pretty good. [The problem is that you set a way to high standard for yourself;)] I find it hard to tell exactly what’s going on, but that doesn’t matter.
Could we see a “wire” that is actually in solid view?

blenditall: Thanks for the feedback. I see I didn’t set subsurf for optimal view on some items. The curtain meshes are actually that dense due to sculpting. I just attached another 3D view image, this time with some shading. The story is in the title for this one. This project took about over a week to finalize, partly due to compositional tweaks and the complexity of colors/ transitions/illumination I needed for this. The goal was never to upstage my other works, of course, just to capture a moment of a shattered existence moving toward healing, forgiveness, and renewal.

I won’t rate this yet, I’m waiting it to sink in. There’s thing to like and things to dislike here. I’m not so keen on lady’s face, but you do certainly have you’r own style in doing people. The model itself is great, so it might just be an issue with your material of choice.
Alos the necklace seem a bit rigid, like it’s frozen in the midair.

I love the general color tone you got there, from reason beyond my understadnment, I’ve always liked sepia tones. But I’ll be staring this for some more, before I decide do I really like it or not.

Hippie: Thanks for the feedback! I like that you posted your intermediary reaction to this and are maintaining an open mind

I really appreciate that. Some of the shapes that form what could be a necklace are in fact in the air as part of the whole “shattered” and “mending” aspects. All the materials are somewhat hard and/or brittle for reasons in keeping with the theme. As usual, I have tried to create some meaningful relationships between items in the scene, such as the shattered outer edges and what could be eggs in the bowl.

Nice man! You’re work has always had that artistic quality. Keep it up.

Generally Im a fan, but this one doesnt do it for me…(absolutely no bash on your work).

I think that reaction is based in the general harshness of it. Harsh lines, an obvious grain(that doesnt look quite right), and I really dont like how that blue contrasts with the gold.

And the lady looks a bit old and flabby. Was that purposeful?
Its all really just personal taste though, you know?

Anyway, Im not gonna rate it, because its just not my thing. If I was to rate it, it’d probably be 3*

Another very fine artistic piece. You must have enough to have a gallery showing somewhere RobertT. Have you done a gallery showing before? Have you even thought of doing one? You could render your pictures at pretty much any size you need and make quite a spectacular showcase.

I would be interested to know how you have the time to work on such incredible pieces and somehow make an income somewhere.

And taking another look, the soft style of the hair seems like it doesn’t fit in…

But as freeality said, Keep 'em comin Mr. Robert, I love your work.

I tend to agree with the others here.

The other thing that strikes me is you colour choices on this one. They seem to clash and not meld/fit very well. Almost to the point of being irritating to look at. Sorry to say that, I know it’s harsh, but it is very bright, clashing and not pleasing to my eye at all.

As the others have said too, keep them coming. You are one of the true Blender greats here.

Howitzer: Thanks so much for the kind words, Howitzer.

free_ality: Thanks for the feedback, free_ality. Yes, all that was intentional, down to the harsh pulverized look (what might resemble “grain”) of everything coming back together, the mending of the shattered within and without. The colors were chosen to contribute to the meaning as well, even beyond the obvious hot/cold/light/dark aspects (e.g. the face/eggs/hat/bowl/age/birth/fire/water/glass/ice are all interrelated elements).

goosey: Thank you very much, goosey. If the idea is powerful and inspiring enough I take as long as necessary to work it out in 3D, usually at the expense of sleep. This project took around a week and half from start to finish, with an average of 2 to 3 hours each session, but for me it was worth it, even though in the end I knew it was not going to be a necessarily pleasant or popular piece. At that rate I will probably never get to blend all the ideas I hope to express with Blender

A gallery showing might be interesting in the future. Right now I am focusing on creating and learning as much as possible from one project and building on that for the next one.

blenditall: Thanks for the followup, blenditall. I knew that would be said about the hair. This is one of those images I’m almost tempted to try to explain completely, why I did everything the way I did it, especially since after the planning it took a while just to technically work out all the ideas I wanted to convey, but I’ll just leave it up to viewers to decide what to think

BgDM: Thanks so much for the comments, BgDM. I always appreciate your insight, and know you know these projects are almost never created and posted lightly. I could have made this much easier to look at, appealing even, but I felt everything had to be this way or else the piece would have taken a much different tone, aesthetically and emotionally, and failed in another sense or betrayed the original intent. It was a difficult challenge going into this. Death but life, rage but inner peace, destruction yet rebirth, sharpness everywhere yet just a touch of softness in the center, eyes closed yet the promise of new insight. I know 99% of that conceptual stuff is likely to be overlooked most of the time, which can make it very difficult sometimes, for an artist, to see a piece possibly devalued or misunderstood or dismissed without much consideration, but it’s definitely one of those chances I know I have to take without fear and accept the consequences for, if the work is to succeed in the way I intended it to, if just on a personal level. So I think that will be the case with this kind of image, which is fine

I’m working on some different things, so as always there will be more to come

At first I think I agreed with the others, but after looking at it again, I’m beginning to like it (maybe it’s just because I’m colourblind :p). The colour contrasts are obviously in keep with the theme of shattering/clashing. Though I don’t think that the “mending” part of it comes across that strongly.

Why does this one remind me of Starbucks? Anyway, very strong atmosphere…

I have a critique. You need to work on your faces. They almost all look the same.

I hope you don’t mind me saying that. You’re great artist but the faces needs work.

leojS: Thanks, and thanks for keeping an open mind.

Lukas Boersma: Thanks for the feedback on the atmosphere.

bigbad: Thanks for the comments, bigbad. I’m doing my best.

IF you stand or sit back from this as you are looking at it, and focus on the purple, its very pretty IMO. Its only when i look at individual elements that i have the same complaints as everyone else. The feeling i get it similar to looking at the random colours of christmas tree lights, they may not be complementroy but they’re still pretty.

I think the biggest problme here is that you haven’t made anyone who looks at this think of the same things you thought of creating this.

TheANIMAL: Thanks for the feedback, TheANIMAL. This final palette essentially comes down to two colors, purple and gold, with a broad tonal and textural range for both.

What I see/think and what the viewer sees/thinks will almost always differ, which I think is good, especially if the interpretive possibilities can make a picture connect with different people for different reasons.

Any ideas I hinted at in earlier posts were just to say that there were very specific reasons for how this came together, since there often seems to be more interest in the lesser technical aspects of an image rather than its actual content, symbolism, story, etc.

I would never want the viewer to be limited to seeing things just my way. I just would be happy for people to think about it, to give it a chance independent of what I say and what other people might be saying about it