Some update images. More of a studio lighting but with the reflections from nature…a hybrid so to speak. I changed the color and added some more things. Details and such. 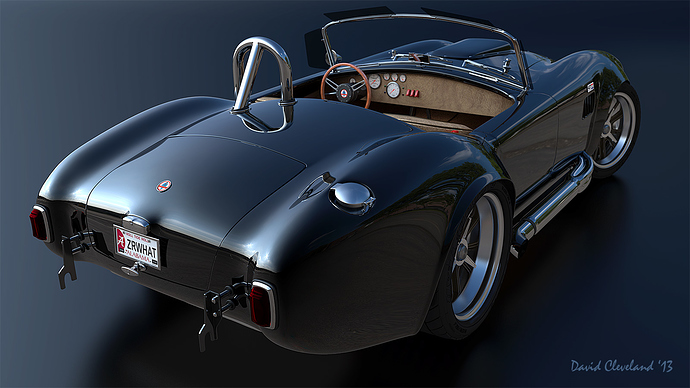 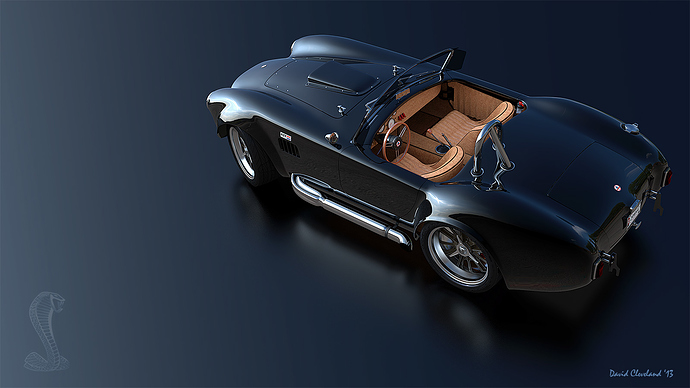 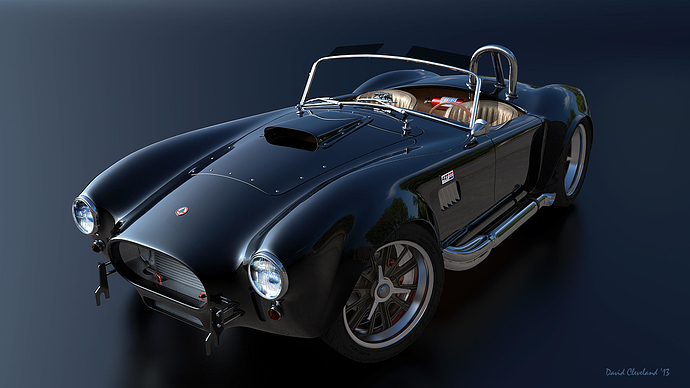 Really wonderful work on this awesome car model… I like your license plate, nice touch

I really like this. The Shelby Cobra have been one of my favorite cars from my childhood so this hits the spot. And what an awesome render this is! You got everything right: the rivet’s on the bonnet, just right wheels and air intake without the mask or body without the bumpers. Well done!
Carol Shelby would be proud.

Yes it looks beatufully by first 2 secounds then you see reflection specialy on the first render and it is big WTF!? For future studio is studio outside is outside. keep that in mind.

Please record a tutorial about modeling such sweeeeeeet thing

Yes it looks beatufully by first 2 secounds then you see reflection specialy on the first render and it is big WTF!? For future studio is studio outside is outside. keep that in mind.

This was done intentionally. I liked the way it looked so I left it.

looks nice, if I would nit pick I would probably zero in on the modeling at the back where some body panels seem bumpy. But its damn good 5 stars from me

This looks really nice but there is one thing that i don’t like, the trees on the back, maybe take another hdri like some black and white studio setups.

Thanks everyone. Believe it or not, this was my first model ever in Blender…and I don’t think I could have picked ANYTHING harder. There is not one straight line on this car and if you don’t get it modeled right it just looks weird. It actually took me over a year to do; mostly because I would get frustrated with it an set it aside. That and I wasn’t familiar with Blenders tools, a lot of which would have made modeling easier. All in all though I’m pretty happy with it. It was mentioned that there are natural reflections in the paint like trees, ground etc. while it was setting in a studio type environment Well, the final images were actually the result of fooling around. I liked the natural reflections but also liked the simplicity of the studio setting. I ended p with both. So, if you notice that, just know that I did it intentionally out of personal taste.

Oh…I’d also like to throw in a quick plug to Jonathan Williamson on BlenderCookie for his excellent tutorials and also Andrew price at BlenderGuru for his great tutorials. Without them I’m pretty sure it wouldn’t look anywhere near as nice as it does.

what a beautifully modeled car. and, i like the hybrid lightning, to me its appealing though its not real. it gives the whole a new dimension.

Great model, and also one of my favorite classic cars.

The details are great. Great modeling though I think there is missing something in front of the right chair. I`m not sure how is it calling. lol

You could also turn down the background - it is darker then the car.

But its damn good 5 stars from me

If Tyrant says it is good, who am I to say otherwise?

It’s beautiful, thanks for sharing it. I’d strap down that fire extinguisher better, it is in for one hell of a ride.