My Shieldy model some might still remember perhaps. It started a long time ago. It is not fully finished yet missing a few little things here and there. I wanted to make a preview-scene for it with a sort of hangag. Back then I stopped working on it because Blender fails at rendering the scene with lots of reflections and lots of indirect lighting without taking days, which is a time-span I can’t let my PC run for. With Cycles I hoped for a rememdy since it can do reflections and indirect lighting a lot better. Unfortunately the rendering is noisy as hell and the amount of samples required to get it somewhat less noisy required as much time to render than with BI, hence impossible. Also the physical rendering had been broken with wrong highlights. I had to drop it due to limitations in Cycles.

Now fast-forward a bit. In the mean time I found some solutions to the problems. Concerning the wrong highlights I managed to deal with them to use shaders oriented on the concept of Physically Based Rendering. This had been a bit of a problem since Blender has a messy BlendWeight definition as well as a non-linear roughness definition (which my game engine has). I managed to build a small shader lib blend file containing some generic shaders for the common situations I use. Not perfect with the existing Cycles material nodes but at last the reflections are now more realistic and less blown-out white.

Furthermore I figured out how I can do a kind of distributed cycles rendering. What I did is rendering images of 100 samples (different seeds) each taking roughly 50min to render. I then combined each image into an accumulation EXR image using correct math to retain the precision and correct result. I could then distribute the rendering over multiple days and can at any time continue adding samples to it if I want to.

This image below is a total of 2000 combined samples. It has still some noise in it. I’m not going to add more samples to it as I just wanted to see if I can now render a final scene if I finish the model. 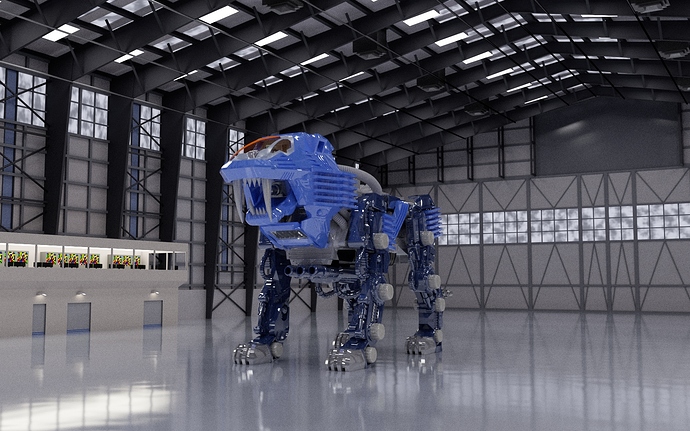 I also experimented with some outside rendering as this for some reason requires less samples to work. I tried to find some HDRI light maps of some rocky mountain place or some plains but in vain. There seems to be nothing useful around. The maps I found so far do not cast a proper sun shadow as the intensity samples are off and Blender has the worst ToneMapper node I’ve seen since ages. So I tried with my old low-res map and a directional sun lamp. These images took 500 samples, which is a lot faster. I made three images with some moveable parts open/closed. Since you can only upload 3 images here a combined one as preview. The individual images you find here: Missile Pods (left), Default (middle), Shields (right). 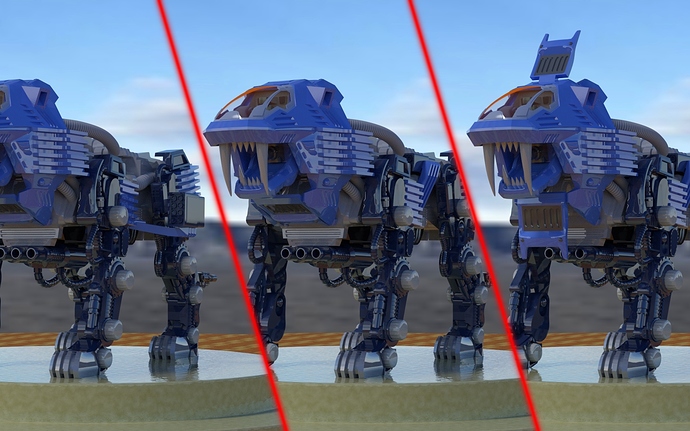 I had planed to use a rocky mountain or a plain as the background but that’s where I hit another problem with Cycles. It can not do foto composition. With other words I can not get Cycles to handle a fake rock-ground mesh only destined to catch shadows so I can compose the model straight into the background. I searched around the forum but no solution. Any ideas?

TODO now is finishing the model (top side, adding some back mounted guns, the images I have already), improving the hangar scene and trying to find some HDRI light map that actually works.

I love the model itself but the different color head is completely out of place. The hanger windows need a bit of work but otherwise a job well done.

The color scheme complies with the original model kit. Re-skins though are for sure possible. Something like gold like an MKII?