Just working on this, just wanted to some feedback. I have only attached few materials for now. 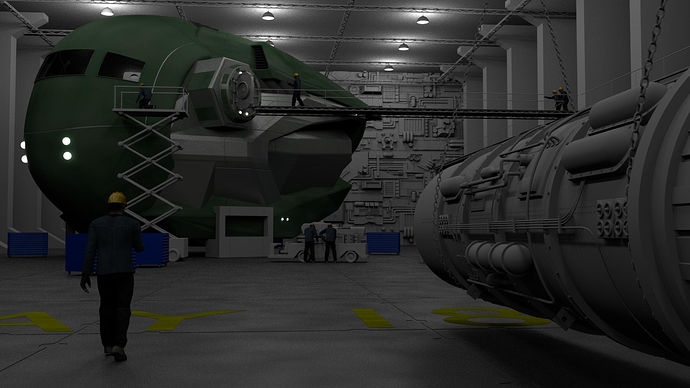 Nice composition, but there’s too much grebble on the back wall. There is obviously gravity in the environment, so it doesn’t make sense to have things that might be controls or gauges above about two meters off the deck. Some utility conduits higher up, maybe, out of harms way, maybe a junction box or two, but not a whole wall filled with panels and such. It’s just a wall…

Besides, it blends in with, and distracts from, the greeble on the engine assembly in the foreground.

I agree with the above poster that the back wall blends in too well with the engine in the foreground, but I’d actually keep the greebling. It breaks up what would otherwise be a very boring back wall. Maybe try tracking the camera a little bit to the left so that one of the vertical supports cuts the background from the foreground?

Yep, I agree, too much greebling on the back wall, it draws the eyes in and you get lost there. A less greebled back wall might look boring before texturing but once it is, it’ll look a lot better.

Also, although that looks to be a big work area, it isn’t big enough for a ship that size. If they turn the anti-grav system on, the thing is going to bang into the ceiling, causing a big embarrassment for the foreman :D. A good reference to look at would be an aircraft hangar or aircraft assembly line to get an idea of the scale you need (and a good reference to get an idea of the type/density of greebles for the back wall). IMO, the building needs to be a bit taller and the columns need to be moved/deleted because they crowd the workspace.

Other than that, I think it looks good. You’ve got good foreground, good action in the scene, good detail, and with less detail on the back wall you’ll have good eye-flow.

great feedback, I really appreciate it. I fixed the back wall, raised the roof and pushed the coloums back. Its given me some black areas that i need to work on now. I thing that is really annoying is the roof, and as I look at the image I can see a few mistakes. 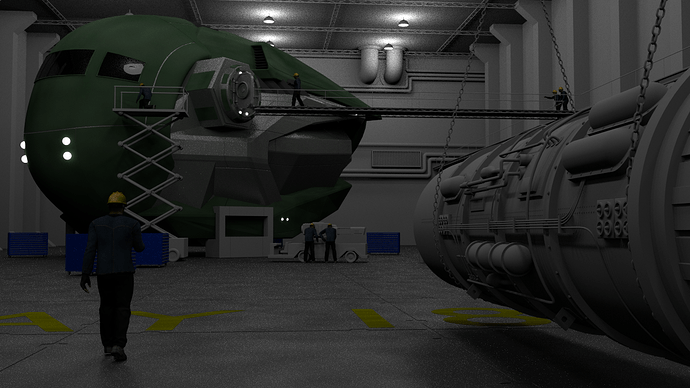 ill keep you guys in the loo

NICE! That back wall is perfect, and the support columns aren’t nearly as intrusive now. Can’t wait to see how it looks after some more detailing =)

This is really coming along. Here is a link for hanger deck pictures which you’ve probably already researched. Might be some ideas here.

An aircraft hanger on a ship, freaken brilliant. I was using the Boeing factory as reference.

I did a bit more which adds to it. Texturing has never been my strong point but I am looking forward to doing it this time. 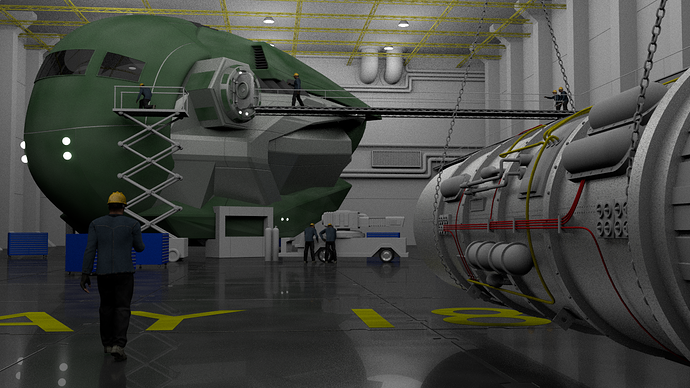 One suggestion if I might. The canister on the right is looking good and is a nice line leading in. What if the aircraft itself was scaled down and the left border had a similar lead in. Similar but totally different. But, you have it going on here. The figures are providing scale and looking good.

My problem might be where is this. Obviously not a space ship given the figures. The piping and such suggest a aircraft carrier but then there’s the scale of the aircraft. Hanger decks are huge and way bigger then the planes. They have to run JLGs and other vehicles that need a high overhead. Not that I’m an authority on aircraft carriers since I worked Submarines for many years and only several carriers.

The point is you have to decide where this is be it fantasy or reality. If fantasy it has to be specific. A specific place you designed and have to sell. If reality it also has to be specific up to a point. The viewer can’t be confused. Not that an experimental aircraft couldn’t be on a current carrier. But, it has to fit through the elevator doors.

And, speaking of doors it seems to me hanger bays had a couple of huge doors sectioning them off forward to aft. Damn this old memory but that could be a chance for some tremendous depth there. And, a little DOF. But, hey, you are obviously talented and here I am going on as if I had done anything this nice.

The lettering on the deck is outstanding and another lead in as you well know. And, military, any military, loves numbers. We could transport sons a bitches to mars and that canister would have numbers on it. ‘YT14 - 687 - 4B’. And, they would be on the bulkheads also. Once you decide on a specific location you can then sell it. Looking good guy.

This is a really neat scene, the modeling is terrific! I love all the greeble, it really sells the realism.

I just have a couple comments in terms of the theory:

With that said, I honestly think this is a great scene. As I said, the modeling and attention to detail are amazing! keep up the good work!

Here is the update

The progress is coming, which is good. I want the focal point to be ship, so I think that I need to tone down the yellow and change it to some other color or something less intense. 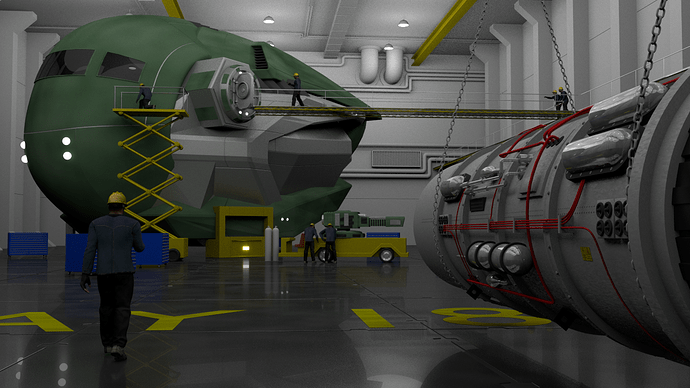 Thank you for your feedback, it is very beneficial

A bit more of an update 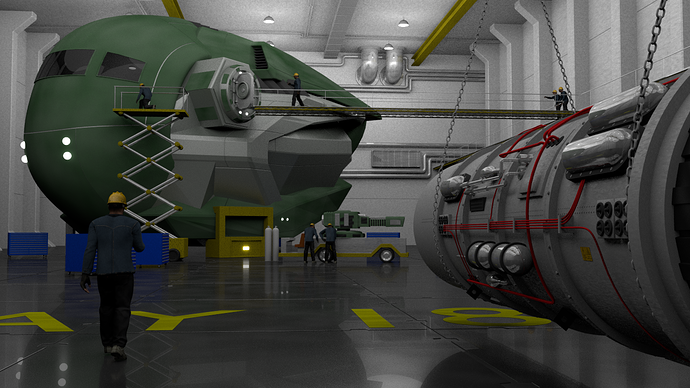