This is just a notice that I am moving on with the film and not actively seeking feedback at this time. I won’t check here often, so if you want to give feedback, which you are welcome to if you so desire, I may not see it for a while. You are certainly welcome to watch and comment. 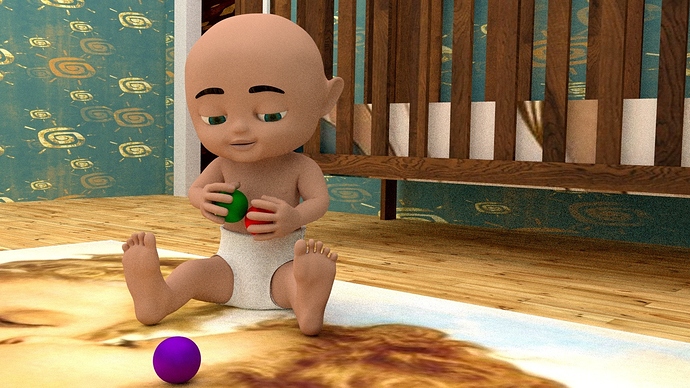 This is a work in progress, far from the finished product, but I just finished the blocking stage and would very much appreciate feedback before pressing forward. I undertook this project both as a creative venture, as an artist, writer, musician, and filmmaker, but also to deepen and broaden my understanding of Blender. It has certainly been educational. Information about the film and what I’m looking for in terms of feedback follows the link.

Here is some information about the film:

What I’m looking for:

Thank you for your feedback. It is very much appreciated…

hey,
Nice job on the blocked out animation.
Try to add more movement to the characters, for instance when he is leaning forward to pick up the blocks, the feet and legs are completely stationary, which looks weird. One thing I do when animating is I act out the movements and see if any parts of my body move as a result of the action. It is surprising how many actions actually move your whole body.
I really liked your expressions, they seemed to convey a the emotions very well.

Because of problems with mesh stretching, I actually rigged Aaron in that sitting position and I have found that I frequently forget to animate his legs. Having him sit on the floor is one of the biggest challenges. I initially rigged him standing and tried to put him in a sitting position and just couldn’t make it work, particularly because he then bends forward so far to try to reach the purple and yellow ball. I tried corrective shape keys and other little tricks, but finally decided to remodel him in a sitting position and rig him that way. Well, that solved a major portion of the mesh stretching, but it created this situaiton where I am limited in the movements I can make for him. But I appreciate your comment. You are right and I will do what I can to liven up those chubby legs :).

I did do some acting while sitting on the floor and it’s uncomfortable :). I’ll do some of that again to consider what movements could help make it look more realistic.

Thank you for watching and for your praising comments as well.

Lovely work! I am impressed with the very sutble changes of the baby’s facial expressoins and body languages perfectly in accordance with the sequence of the events.
For improvements, I would add a bit more dramatic cut around frame 094(sorry I can’t see the shots number here) when the baby catches the cube, like, a close-up of the cube on the left and the baby’s hand on the right, the cube moves to the baby’s hand in slow motion.
Hope this helps and keep up the good work!

Thank you for the encouragement. I appreciate it. I understand what you mean about the cube. I’ll look at it and consider how to make this work.

The biggest negative in my mind was the score which screamed midi and never seemed to synch with the action. I would consider having no score for the first seconds and bringing it in when the first ball moves.

The second “test” the baby does with the cube needs to be changed or cut. Either make the cube much larger or much heavier. He’s already moved a ball of similar size. It does fly at him, which is different. It’s time to up the ante.

Thank you for watching and for the encouragement. Yes, there are some things I need to work on in the shot where the Baby and the Doll are interacting (struggling with each other). I have come up with some ways to resolve these.

I’ll take your other pointers to heart and see what I can do. Thank you again.

Slick animation and rigging! Nice job! Are you using a SSS shader for the skin?

Thank you, @cpfeiffer :). I downloaded a couple of skin textures somewhere, I don’t even remember where, and I’m doing a straight projection on the mesh of one of those, not even UV unwrapping. I wasn’t going for any kind of strict realism here and was happy for it to look a little cartoonish. So, I never tried to do more with the skin because I was happy with it. I’m working in Cycles, which does a superb job with lighting, so any effects that you see are probably a result of that.

Oh ok I see. Keep it up mrkdwvr, it looks great, can’t wait to see it finished. I’ll be keeping an eye on this page

Posts removed. I publicly apolgize for my impropriety.

And now, without further comment (please), back to your regularly-scheduled review.

@sundialsvc4 Hey man, no worries. Not everyone likes everything. That’s just the way it is and I think that’s one of the biggest challenges to posting for review in a forum like this. I think artists are even more specialized in their tastes because we work at honing our craft and have all these peculiarities from that struggle. Thank you for your feedback. I did make improvements on it based on all of the comments here. I’m in the process of working through those improvements.

Thank you to everyone for your helpful feedback. Much appreciated. I’ll post the link here when it’s up.

Even at this blocking stage I can tell this is going to be a quality short film. I really think you have done an excellent job with the character facial expressions that will draw help viewers into the story. Speaking of the storyline, I think you brought it to life very well.

I think I would probably slow down the timing of both the purple ball and wood cube in the time that they are actually in flight… it kind of seemed like they flew into the babies hand too fast. Most all of your camera angles and camera moves seemed to flow really well and served a good purpose.

As Photox mentioned, I’m a little mixed on the music, it’s not annoying in anyway, but I’m not so sure you couldn’t find other choices that might be better. But of course music is a real personal decision I guess.

I’d be curious to see a fully rendered frame, just to see how the environment and character looks like when rendered.

Thank you for your feedback and the very positive comments, which I find encouraging. Much appreciated.

I agree about the ball and block flying too fast. I generally have a good intuition for such things, but on this particular issue, it just didn’t seem right at the time of animating to make them fly slowly. I will work on that for the final render.

I had set a deadline to put this out for feedback and was feeling pretty nervous about it. I forced myself to meet the deadline, knowing that things were far less “perfect” than I wanted for putting them out there for critique. I had a day to work on the music, which I composed myself in a MIDI sequencer. It definitely needs work. I like hard, progressive rock and this isn’t exactly how I’d prefer to hear this music. If I had all the equipment, I’d have made recordings with guitars, piano, bass, and drums. I have had a lot of limitations in this project, and this is one of them. But the music does need work. Once I have time to get it together, I think it will make more sense to you. I have decided to use original music because I monetize my videos on YouTube, and I’m not a terrible composer and musician :yes:.

I put fully Cycles rendered frames in the intro and credits section of the film so viewers can get a sense for the “real deal.” I actually have recently passed through a real crisis on this matter. If I were to render this film out on my current Macbook, it would take 8-12 days (24/7), and the renders would be grainy and with far lower resolution than I could truly be happy with. I tried to do some render baking and such, but this is my first animation project and I’m relatively new to Blender, so I have unwittingly done things along the way that are costing me now. I can’t get the render baking to work. I also tried render layers with compositing and it was just way over my head for where I am in my Blender experience. So, I have decided to compile a the-best-I-can-do-right-now version of this little film and put it on the shelf until I can get a computer that can handle the workload in a speedier fashion. This has been a difficult decision because I really wanted to see this project through to the end.

As it stands, I’m currently putting together the “final” version, which will be an OpenGL rendering. It falls far short of my expectations, but sometimes you just have to accept how things are and move on. Someday, I will render it out fully in Cycles. But for now, I’ll put some stills in so you can see some of what the final product will look like. 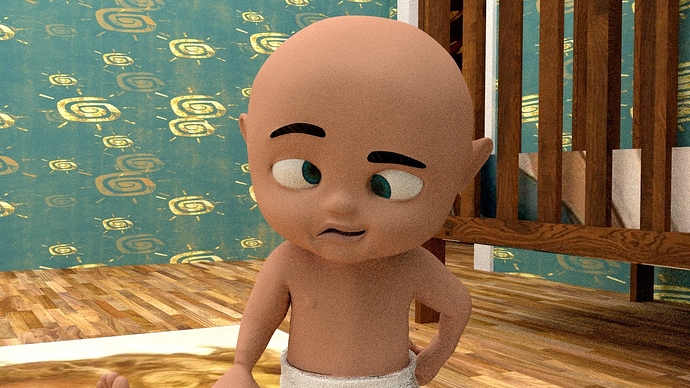 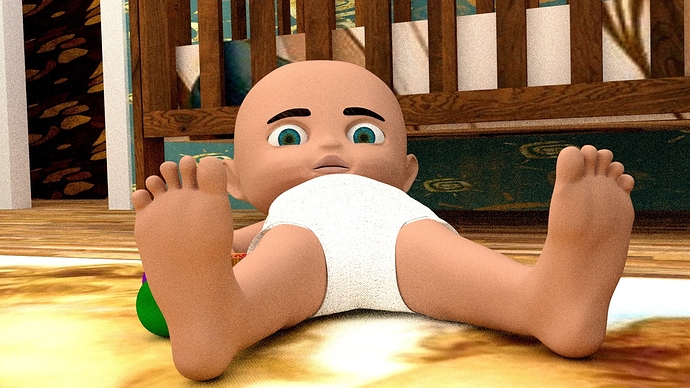 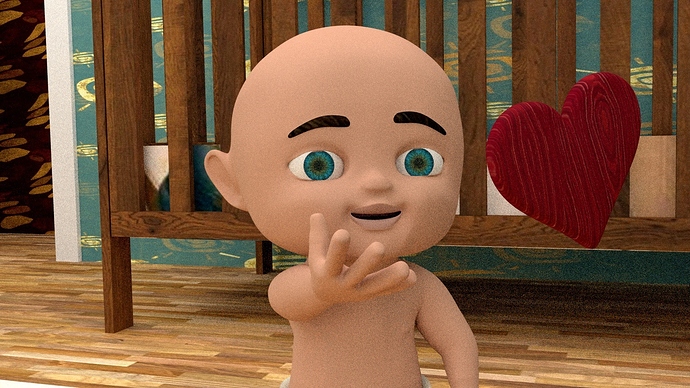 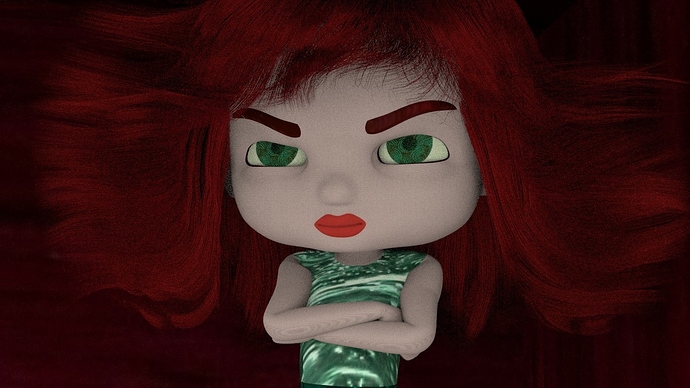 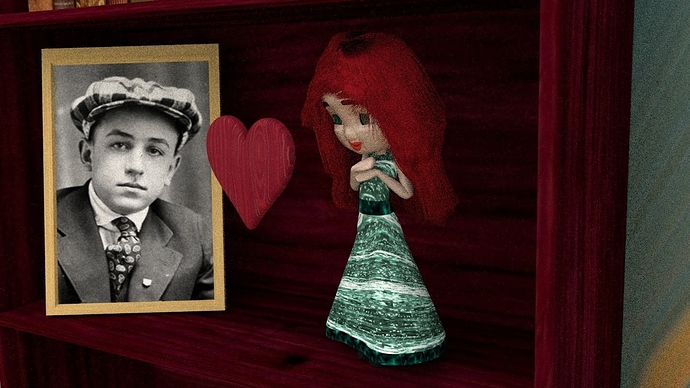 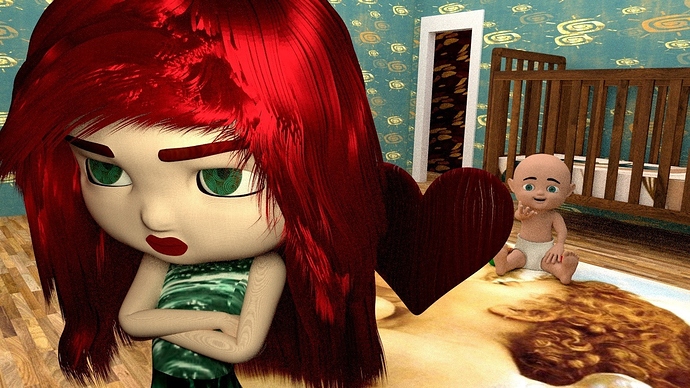 As it stands, I’m currently putting together the “final” version, which will be an OpenGL rendering. It falls far short of my expectations, but sometimes you just have to accept how things are and move on. Someday, I will render it out fully in Cycles

Let me ask you something … have you considered possibly switching this over to BI render? I would at least maybe test it as an alternative, with the exception of maybe the girls hair, I see no reason why you couldn’t easily make the material changes and benefit from much quicker renders and most likely less noise.

I can tell how much work you have put in this, and truthfully, it deserves better than an open GL render. Here are some other options to consider…

Just some food for thought, I think it’s a good enough animation to justify giving it a one last college try before basically putting it on the shelf.