I’ve released my second Short Video film called the “The Golem”. It’s about Nature and its protection.

I would love to hear your constructive critism on my video.

All animations are done by me via keyframe. 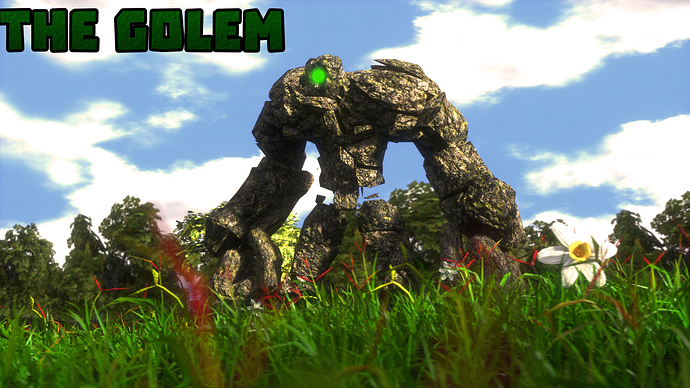 Okay, that one was pretty good. Now, I do have at least some concerns about it.

For the first one, it would have to be the sky dome. When you have the camera raised as the golem roared, if you paused it at the 33 second mark, you can see where the sky actually ends. That can break the reality of the sky. More importantly, the sky dome texture doesn’t really have to move. Although clouds actually move in real time, it’s really slow; even static unless you are into cloud watching.

The meteors are pretty good, but it could be improved. If you can, try using the fire simulation using domains and smoke flow.

The flower wilting? You could have done that in one smooth notion.

Awesome film Songoku. I actually felt sorry for the Golem at the end, after all the effort he went to protecting things.

I loved the story, the lighting was good, the animation was pretty good too and I loved the bassy sound effects for the Golem.

I agree with xeroxshadow that the skydome could have been bettter, I think by just reducing the speed of the spin would have been enough (maybe 50%).

Great effort and I look forward to your next film.

Nice work! Some flaws were pointed out already but the animation on the golem itself is very good.

Thank you all for your constructive critiscism guys! Much appreciated