Just wanted to give you a heads up about the 3D stereoscopic tools I’ve released for Blender:

Here’s a description of most of the tools (a few of them are not stereoscopic-related, but they’re useful in combination with the other tools): 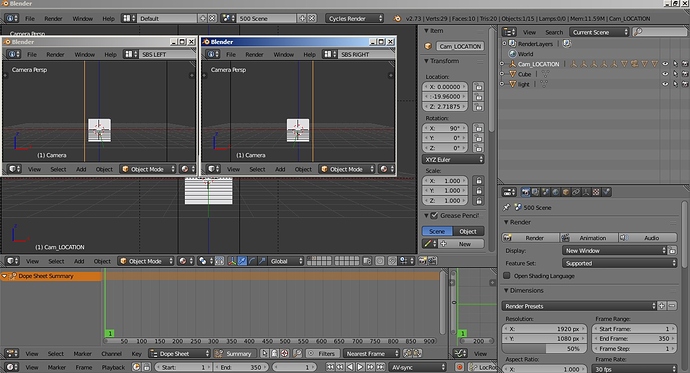 This script dispenses with the annoying behavior of the parent object becoming unselected and then having to reselect it. Also, it dispenses with having to be over a particular window when performing these options.

A warning: there is currently no documentation, so proceed only if you’re already comfortable with Blender and looking at code to see how things work. I’m working on a series of articles which will explain how to use these tools in a stereoscopic workflow. I should mention that the software in the “windows” directory is for Windows only.

As far as I can tell, there are very few people seriously using Blender to make stereoscopic images. I’m hoping to help change that. I’m a 3D (stereoscopic) filmmaker and I’ve been using Blender exclusively for stereoscopic animation for over a year. Because Blender doesn’t support stereoscopic rendering out-of-the-box (the anaglyph mode in the Blender game engine doesn’t count), I’ve had to modify other peoples’ tools and build my own. While some of the tools are a work in progress and others need some serious polish, I’m hoping that by sharing them that some other 3D fanatics will start using Blender to make more stereoscopic images and videos. And I hope that those who are 3D fanatics with a knack for coding will pick up the ball and make code contributions – and make these kinds of stereoscopic features more accessible to all.

Anyway, I’m throwing the files out there for those who like trying out some fairly complex software with no documentation. :eyebrowlift: Feel free to ask questions if you have them; your questions will also help shape the documentation that I’m writing.

Speaking of no documentation – I have to thank the folks here at Blender Artists for helping me out when I had Blender API questions. I have to especially give a BIG thanks to CodeManX. It wouldn’t have been possible to get this far with making Blender do something that it’s not supposed to do without all of your help

The documentation for this stereoscopic toolset will be in the form of a series of blog articles. Here’s the first article:

Please be aware that this first article serves as a high level overview of modern 3D graphics and Blender. The intended audience is those who are familiar with stereoscopy but who have no Blender experience. (In other words, if you’re on this forum, this will be largely remedial stuff.)

I’m currently working on the other articles and will post them as I finish them.

The second article has been published. This is about installing and configuring Blender and the tools from its stereoscopic toolset:

The next article (which I’m currently writing) will walk you through actually using the tools.

The third article is up. This article walks you through making a stereoscopic animation in Blender: http://3d.simplecarnival.com/a-stereoscopic-workflow-for-blender-part-3-your-first-stereoscopic-animation/

Have you been keeping abreast of the multiview branch of blender? it is scheduled to be committed into 2.75? – http://www.dalaifelinto.com/blender-manual/render/workflows/multiview.html

Have you been keeping abreast of the multiview branch of blender? it is scheduled to be committed into 2.75? – http://www.dalaifelinto.com/blender-manual/render/workflows/multiview.html

Yep. I haven’t tried multiview yet, but I’m keeping an eye on it and will most likely incorporate it into the workflow/software that I describe in the articles. It looks really promising!

Part four is up. This goes into detail about the camera rig and how to animate interaxial distances. It also explains how to achieve multirigging: http://3d.simplecarnival.com/a-stereoscopic-workflow-for-blender-part-4-digging-into-the-animation-template/

Here’s part five. In this article I cover BISE (Blender Image Sequence Editor) and demonstrate a technique for bringing stereoscopic images and videos into a stereoscopic scene: http://3d.simplecarnival.com/a-stereoscopic-workflow-for-blender-part-5-bise-and-stereoscopic-images-inside-blender/

And the final bit of documentation: http://3d.simplecarnival.com/a-stereoscopic-workflow-for-blender-part-6-running-a-render-farm/ This article covers a stereoscopic-centric render script for Windows.