This is actually a series of questions, but I’ll just post them as they raise.

Make the bones dynamic or rigid and the mesh no collision and no more flying away. Don’t understand the second question

Thanks you SO much, and the second questions wasn’t really a question, but really just a statement stating if you have any tips (Such as if you had a common problem you think I could encounter with this) that could help me avoid and upcoming problems.

Another problem that I seem to have is that when I start it, the mesh’s feet fall through the floor. I know I need to change the center point of the armature to the feet but how do I do that?

Make sure your character is above the floor, if the feet are underneath the plane, that will happen.

Check if the bounding boxes or the collision circles or the feet are above the plane mesh. OR they just go through it. You can easily decrease the radius of this. They will show up as small pink circles in the EDIT mode

OK here’s what I think. You need to make the armature no collision. Then add a simple cube or empty. If you chose the cube (which might be the better choice), then you need to tab into edit mode and have the cube cover the entire character (by extruding and adding edge loops). Another thing, if your character has arms, then you probably don’t have to have the cube cover the arms. After all that, you need to make the cube dynamic. Then, parent the armature to the cube (not the character to the cube). then you can change the radius to your liking AND you have a low poly mesh for enemies to hit. (Assuming there are enemies.) Oh, and you might possibly want to add collision bounds to the cube.

Another problem that I seem to have is that when I start it, the mesh’s feet fall through the floor. I know I need to change the center point of the armature to the feet but how do I do that?

Two ways.
Firstly, (make sure you have keyrecording off whenever you modify the armature btw, i had a LOT of muckups because of leaving this on while animating :L) go onto your armature, go into edit mode, select all and move it up.

The second way, is to make a bounding box. If you haven’t already, make an invisible box for your armature to sit inside and be parented to that will do all the physical movement. Set your box to convex mesh bounding and then you can edit it into any shape you want (eg make the bottom pointed so it can go up hills)

By the way, if you choose to simply move the armature, amek sure that you tab out into object mode and move it back into it’s orignial position.
Simple thing but you’d be surprised how many times people get confused by this

I fixed the falling through the floor problem, but this gamekit tutorial cd isn’t helping. On the CD, it has the action of walking (I already made it) to appear when you press the up arrow, but for some reason this doesn’t work with me!?! Do I need to add torque motion to it, because everytime I do it flips my character into a countinuous cycle of spinning and still doesn’t play my walking action! Any help?

Forget the torque. Are you using 2.49 or 2.5? because if you are using 2.49 then you have to go to your character (I think) and add an ‘always’ sensor an ‘and’ controller and a ‘parent’ actuator and type the armature name in the box. Then connect them all.

If you are using 2.5 then I dunno what to tell you. 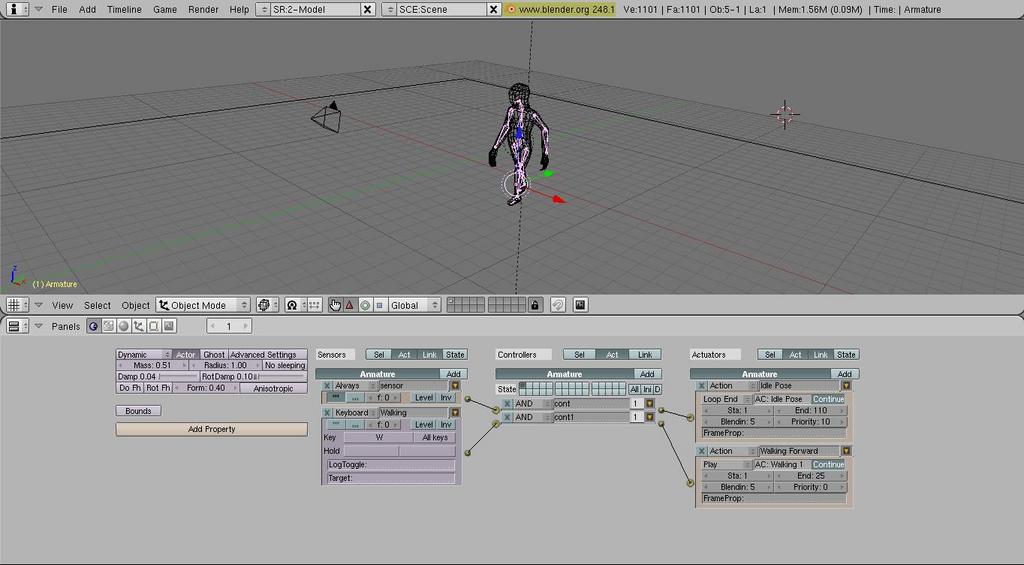 I SEE THE PROBLEM! (I think). Change the blendin of the walking actuator to 0 and that SHOULD do the trick.