I’m rather new here… I’ve looked around these forums for a while, but I haven’t had anything decent enough to post until now. This is my first (successful) attempt at an interior scene. 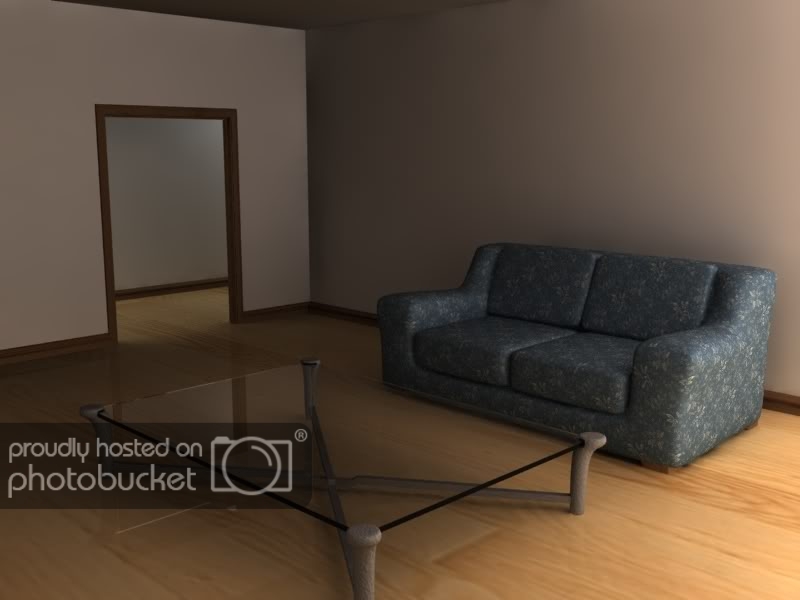 i think you sould put some real lights, maybe on each side of the sofa, and some paintings on the wall

i really like the lightning on the sofa, it looks very realistic. great work on the glass table too. The only things that bothers me are the proportions of the door and the scaling of the floor texture (i think the wooden floor tiles look too big).

Yes, the house must be for little elves considering the size of the texture but good job.

Looks good, other than the few crits that have already been stated. What did you render with with… yafray or blender internal?

looks a little empty. Maybe a picture on the wall or a lamp.

but hey, its better then anything i make. good work.

It a little dark (unless you tryied to achieve dusk lighting), and looks a bit empty. Other than that looks pretty nice for a first interior attempt.

but with the propotions the sofa looks too small in comparison with the table, along with the door. Also the floor looks like it is out of one large sheet of wood. I guess other then that it looks like a very nice sceen only a bit empty(looks like my room:))

Thanks for your responses, everyone. I’ll keep those in mind for my next attempt. This one took a long time as it is, and I’m not sure I have the patience to continue with it.

Looks good, other than the few crits that have already been stated. What did you render with with… yafray or blender internal?

It was rendered in YafRay using full GI on higher quality.