Simple milk carton logo (a practice in texturing and lighting)

I’m currently trying to develop a simple logo for my website and potential online business, www.lost-ear-studio.com. Current;y, the site is extremely rudimentary so I have plan to overhaul it completely and to only show some of my more serious works rather than just basic class works being hosted there.

One inspiration that I have been rolling around in my head is a simple milk carton with the missing kid label on the side. However, the image would show a missing ear. I want to model the ear itself so I can get a decent edge rendering but that will be later. I basically want an high quality image of my logo that I can use on my site’s intro and about page. And to extrapolate from that a simple black and white logo for business card and watermarks.

Currently, I have an extremely low poly open milk carton but I can’t seem to get it to look okay in renders. Mostly because of the normals, I believe. I won’t want to waste times on modelling the inside as it will never be shown.

Even if the milk carton looks bad, I would like your feedback on the proportion of the carton? Something feels slightly off about it to me and I would like to find out before I go too far with this. I will be making another carton with more depth to see if I can get rid of the normals. I will be using the current model’s proportion for the next one till I get some feedback.

I have attached the .blend for you to review

P.S. The low poly thing is just a practice for me. I find that lower poly does helps a lot in organizing for UV map in Maya and I tried the same thing in Blender and that seems to be the case too.

Also, is it possible to have fluid spill into the shape of the word, Studio? I’ll be looking around for this tip but I would like to have ‘LOST’ above the ear pic and ‘EAR’ below. then have the spilled milk in ‘STUDIO’ below the carton on it’s side? 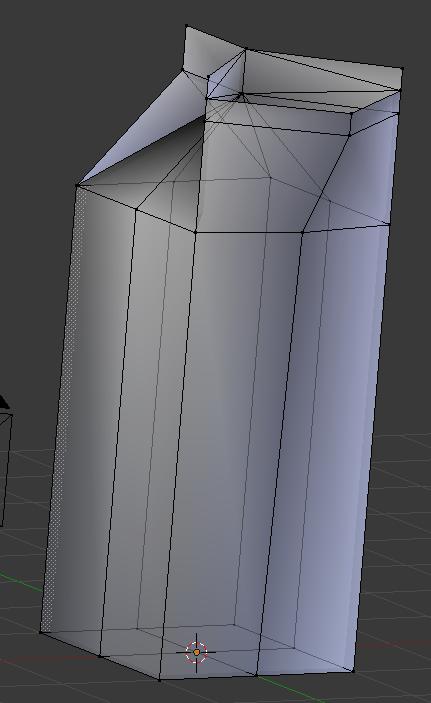 Use edge-split for the render, will get rid of your normal problem (though you should remove doubles and re-calc normals with ctrl-n because it looks like one might be off near the top). For your pouring into logo you could render the words and use them as an alpha mask, then make the fluid pour out of the milk into a domain box. It wouldn’t be to hard to set up in the compositor and should give the desired effect.

Hey, Rad. The fluid sim in Blender allows you to create a “control” object. This “control” object can attract the fluid and actually have the fluid take the shape of the mesh. If you want, I can give it a go if you want to set up the basics for the table and what you want the fluid to finally look like with a mesh model of the final fluid shape. Let me know…

Here is an example of a control mesh used in a fluid sim:

QS Dragon, what do you mean by using the edge split? could you clarify please?

Awesome, thanks, animwannab! I do want to learn how to do this myself so thank you for pointing me the way.

i think he is talking about the edge split modifer. im not sure exactly how it works but i know it helps me clean things up a little.

mind you, this problem could also be solved (at least 90% of the time) by double checking your edges and verts. I see at the top of your image that your edge flow goes a bit crazy. try and keep triangles to a min and always remember to hit W then Remove Doubles. this will help you steer clear of those pesky normal problems. And as mentioned before, CTRL+N will recalculate the normals should they not behave.

So basically, try and make your mesh so that you can physically follow all of your edge loops around with your mouse and end up exactly at your starting point. clean topology is your best friend.

I thought that triangle only to be avoided for animations? This model will not be distorted in any way so edge flow shouldn’t matter?

Tris are bad for everything, texturing, subsurfing, sculpting tris will get in your way. Only when making low poly game assets are they acceptable. As game technology improves, there is little need for any model to not be all quads. Edge flow is always important. Proper edge flow is what separates goo d modeling from bad.

Tris are bad for everything, texturing, subsurfing, sculpting tris will get in your way. Only when making low poly game assets are they acceptable. As game technology improves, there is little need for any model to not be all quads. Edge flow is always important. Proper edge flow is what separates goo d modeling from bad.

Though i agree that good topology is most important thing, you cant go crazy with chasing quads in everything, some stuff is better kept simple, well placed triage can save lot of time and headache when its used right. So if the triangle is not in a important place and does not change the visual appearance of your model let it be…:yes: for example i have done lot of car modeling, and keeping the model clean there, is the key for smooth body lines, but you cant solve all the small body details with quads only, u need to end some loops with a tri, so that the rest of the model would look ok :yes: