First-time poster but I’ve been using Blender for the past year or so…I have a feeling I know the answer and this question has probably already been posted but does anyone know if it’s possible to simulate the light from an actual light bulb? For example, a 40-watt bulb vs. a 60-watt bulb? Or is it all just guesswork?

Your question implies a physically based renderer to get energy intensity correct so Cycles or Luxrender are options. According to Luxrender’s documentation:

There is unfortunately no standard for intensity. It can mean that of a specific bulb (i.e. 40W), a generic power (i.e. 100W and you have to use “gain” in the exporter as multiplier to adjust it). Or in generic IES files can have intensity 1.0 and “gain” is used to specify their power (IES suppliers specify what rule they used on their site or documentation).

Even if you got intensity right, you’d then need to set your render exposure correctly like a real camera. Luxrender provides Sensitivity (~ISO), Exposure (~shutter speed) and F-stop which is nice. Otherwise it’s just guesswork.

@bigstu80, technically what the OP wants is a physically correct renderer, not physically based.
Physically based is where the materials and properties you set are often real world based (which makes material/light setups easier) however the engine doesn’t have to render based on physical rules. Both Cycles and LuxRender are physically based.

Physically correct is where the render engine is designed to be as close as possible to simulating how real flow works, of which LuxRender is included in this. This includes rendering in more than just the RGB colour values, rather spectrum values instead.

To continue on from bigstu80, LuxRender may be best suited to what you want, especially in how its exporter presents parameters to you.

Flourescent Lamp, where I specified the Temperature of the Lamp as the blackbody texture, input the Watts (W) of the lamp, and how efficient the lamp is in Lumens/Watt (lm/w) 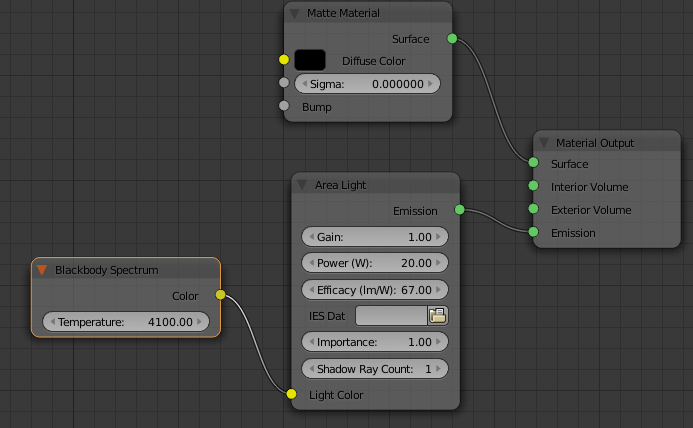 Same for the incadescent lamp, notice how its watts are a lot higher but the efficiency is a lot lower. 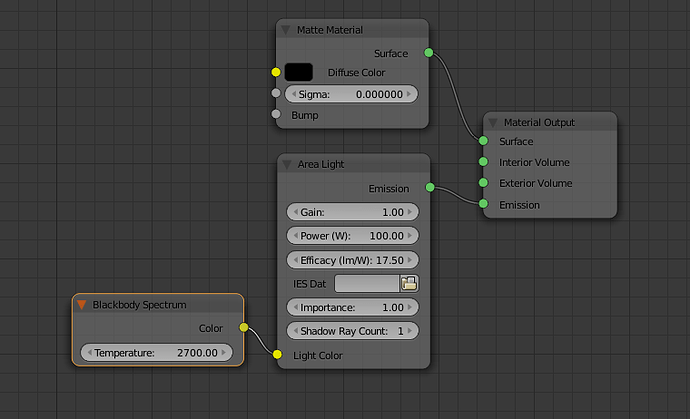 The final rendered image. I’ve adjusted the camera settings, which if you were wanting to mimic a real photo, you would set to the same as your camera.
I also had to set the Whitepoint/Temperature of the render, this setting will need to decide what is considered ‘white’, currently I set it to daylight. This you can match the temperature a camera uses if you wish. 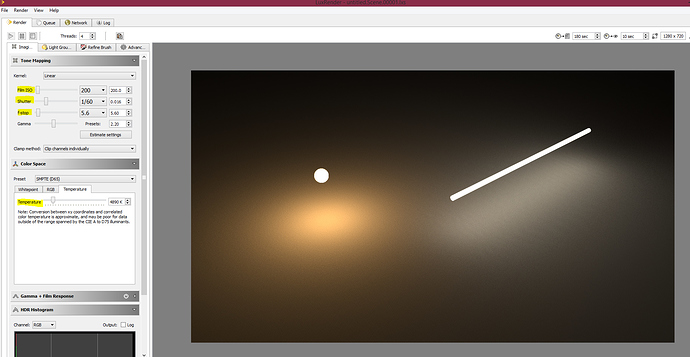 Most of the lamp settings I got off the internet, it can take a bit to find the ones you need

The whitepoint is a difficult one to match, as the human eye is constantly adjusting things relative to what it perceives as ‘pure white’, see here for an example: http://www.ronbigelow.com/articles/white-point/white-point.htm

I created a node set up a few months back to help with this very thing.

It can be downloaded from blendswap.

Edit: I have added an animation showing this node group in action. The only parameter changed during this animation is the input temperature. https://www.youtube.com/watch?v=d7XK31Vmg7E&feature=youtu.be Cycles already includes a black body node...

@zeealpal - you’re right, my memory serves me poorly. I did actually do real world tests with LuxRender and lights - I think efficacy was the hardest to get right. I was going for sodium vapour street lights and tested various settings on my SLR and in the virtual world.

Now where did I put those marbles…

@zeealpal: How would a similar setup look in Cycles? I was hoping it was possible to adjust “camera” Whitepoint/Temperature in post (see own comp thread) interactively with a slider offset somehow, and this may prove useful.

@CarlG, I’m not exactly sure, part of the reason it is relatively easy to do in LuxRender is that it is designed to be a physically correct, physically based unbiased render, where the easiest way to get a realistic render is to simply input real world values.

The whole tone mapping built into the render engine is also focused on making that easier.

Great replies, guys, thanks! I still have a lot to learn about Blender and have only dabbled in Cycles but I’ve spent a lot of time with other rendering software and, in the light settings, there were settings that explicitly said ‘wattage’, ‘lumens’, etc. Blender lights seem to be limited to ‘energy’ but it looks like the Cycles node setup has the more specific settings so I’ll try that as I get more into Cycles.

Something else to consider is … how “real” does “real” need to be? For you, and for this project? Sometimes it is absolutely the right thing, absolutely necessary, to get “physically correct.” But in other situations you simply might need “plausible.” “Believable.” Say, a desk-lamp. It has to look like it’s emitting light, and that light is shining through the glass, and that some nearby scene (say) is being reflected in the glass, and so on. And oh by the by, you don’t have a lot of time in which to do it. In that case, a combination of techniques might do the trick … none of them actually trying to simulate the physical reality, and perhaps none of them, by themselves, selling the shot. The object is to convincingly convey aspects of what the light, and the lighted object, looks like, and to do it on the cheap. Which is quite a different thing.