Hopefully, this is a simple question. I have been trying to create the illusion of a metal grate, like the kind found on old bridge decks. When viewing such a grate face-on, from a distance, it should appear semi transparent. However, when viewing it at an angle that is close to edge-on, it should appear opaque.

Has anyone else tried to do this? I would be interested in how you succeeded.

I have been trying to simulate a steel grate, in cycles, by mixing a diffuse shader with a transparent shader—using a fresnel node for the mix factor. But, I am not quite getting the results that I want.

Fresnel does not work with transparent. You need to build a custom fresnel/falloff curve, I typically use layer weight/facing to the power of 5, then a color mix node (or custom lerp group) to set the minimum effect.

Thanks Carl. That was what I needed. Below is a set of screen shots of the steel-grate catwalk, that I made. The first low angle shows the floor of the catwalk appearing virtually opaque. The second, higher angle shows noticeable transparency. And, in the third image, looking straight down, the floor has the scary transparency of a steel-grate catwalk. Notice, in the third, that you can clearly see one of the support struts underneath. I have also included the node tree, that I used. 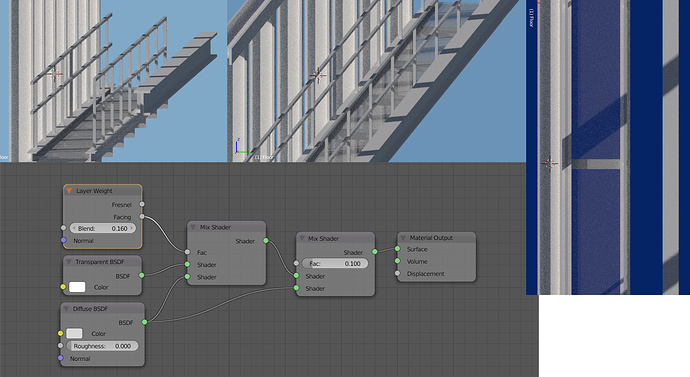