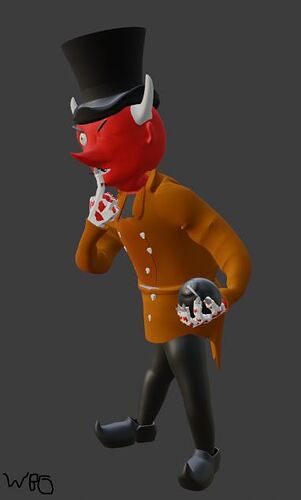 This is a character I designed on paper about a year and a half back, I made him for animations in the future, and an animatic that I’m gonna make really soon(which is why this is a Work In Progress), he’s the first of three demons in his little squad, he specializes in explosives and tech, he enjoys classic cartoons that he found from the mortal realm and idolizes some of the villains from them.

I hope you like him! <3 (again it won’t let me post more than one image so I can’t really show his coattails, and I can’t zoom in on his buttons(the buttons are little skulls))

I’d definitely like to see a movie featuring this little guy and other characters like him! Very original ideas, and nicely executed.