In 2.79 and earlier you could alter the size of the sun lamp in order to change the hardness/softness of the shadows. That appears to be gone now, I can’t find any size setting for the sun lamp.

Did you try to change Angle value? You might wanna to. 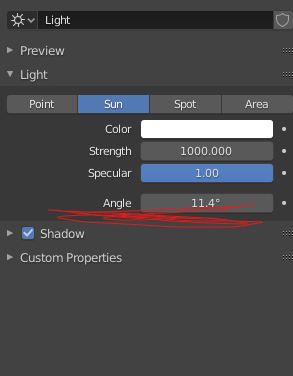 The new Sum light Angle parameter started life as the “Soft Size” for a Sun lamp in Blender Internal and the default value was 0.1. Cycles inherited this parameter as its “Size”. Neither of these was in a specific physical unit. In 2.80 we now have an explicit angular size in degrees for the apparent size of the sun’s disc in the sky. For new Sun lights in 2.80, the default Angle is something like 0.5 degrees which is physically accurate.

Trivia: The sun and the moon are almost exactly the same size in the sky, equal to about the width of your pinky finger held out at arms length. Believe It Or Not™.

The 2.79 default 0.1 value (which again was in no particular units) gets converted to the large 11.4 degree value when you open a pre-2.80 .blend file in 2.80. It should look the same as it did in 2.79 when you render in Cycles, but it’s not terribly realistic at that size (but gives you nice soft unrealistic shadows).

Ok, thank you very much!

Cycles inherited this parameter as its “Size”. Neither of these was in a specific physical unit. In 2.80 we now have an explicit angular size in degrees for the apparent size of the sun’s disc in the sky. For new Sun lights in 2.80, the default Angle is something like 0.5 degrees which is physically accurate.

thx…
seriously no one though naming it soft shadows would be a better idea - it took me half a year to figure it out, and I had to google, blender sun soft shadows to get to this here… and I stil don’t get the explanation, angle still means nothing to me…
… also I’m finding the documentation is less explanatory than what I find on google - needs more pictures

Tooltip reads:
“Angular diameter of the sun as seen from the earth”. Default is 0.526 and is about half your pinky finger width at arms length in clear skies. It represents the size of the sun disc when viewed through a solar filter, excluding the corona.
Mine is correctly named “Angle” though, not the inherited “size”.

this article showed quite nice imaeg to explain it

Why Are Some Shadows Soft And Other Shadows Hard?

This is a quick post on why some shadows have soft edges, and other shadows have hard edges. The picture below looks pretty normal right? Let’s zoom into the shadows on the ground: The shadow… The umbra, penumbra and antumbra are three distinct parts of a shadow, created by any light source after impinging on an opaque object. Assuming no diffraction, for a collimated beam (such as a point source) of light, only the umbra is cast. These names are most often used for the shadows cast by celestial bodies, though they are sometimes used to describe levels, such as in sunspots. The umbra (Latin for "shadow") is the innermost and darkest part of a shadow, where the light source is complet...

Doing some more reading up on it, why would shadows change due to angular diameter? Shadows doesnt change because the sun suddenly moves backwards and backwards. Ill have a look at devTalk see if there any posts on there about this subject.

Unless you’re doing other suns, the sun doesn’t change size - we’re pretty much in a circular orbit. But you can use a much dimmer and bigger sized sun to simulate atmospheric conditions - a sun through some clouds will have a bigger apparent “disk” and make the shadows softer. You’re no longer simulating the sun, but the area in the clouds that glow brightly.

A regular light would have this effect by distance, but not a sunlight which simulates infinite distance.

Not sure where you live, but i live in the caribbean and the sun does change in size. WHen its low at the horizon its bigger vs aroun12-1pm. But that is probably that radius.

Soft shadows are mostly either cause of a diffuser or the distance between the object, the sun and surface the shadow is projected on

Not really, no.
Clouds, fog, and mist can act as that diffuser. Even at perfectly clear conditions the sun will cast soft shadows as it’s a disk and not a point. At contact they will appear sharp, softening with distance. Reduce the size of the light source and the sharpness is kept further.

Sun and moon appearing bigger close to horizon is just a mind trick. Try measuring with binocular - the moon, don’t watch the sun without sun filter.

An optical illusion due to the atmosphere then?

No, not really. An optical illusion as a mind trick. If you measure it, it shouldn’t change to a degree that is observable. The atmosphere may influence the apparent position of the disk, but since the rays are practically parallel and no thickness variation within that limited spread, there should be no change in observable size.

Look through your (flat, not bumpy) window - the building on the other side doesn’t change size looking through the window or not, and glass is way more refractive than our atmospheric gases. If the glass is very thick and curvy (our atmosphere is very thin), that can start influence the building as a whole because it covers a big viewing angle. But if you zoom in on a lightbulb or anything small, it’s position may change due to refraction, but not any observable change in size.

The concept of the moon illusion is well documented on youtube, and the sun varies less than the moon because the moon orbit is more elliptic than the earths orbit. We have a supermoon about once a year, but no supersun.