I have a human model which I saved in version 2.60.6. When I open it in version 2.60.0 or lower the armature is somehow stretched and the size of all objects is wrong (see pic).
Otherwise when I open the file in 2.61 or higher the meshes are just disappeared, but not the owning objects.
But what is the strangest part is that when I start the game engine, there are no problems at all.

This problem appears on several computers all running Linux.

Has anyone encountered this before? Is there a way to fix the file?
I would use 2.60.6, but it causes other trouble.

PS: you can find the file here: https://github.com/DefaultUser/morse/blob/master/data/robots/human.blend 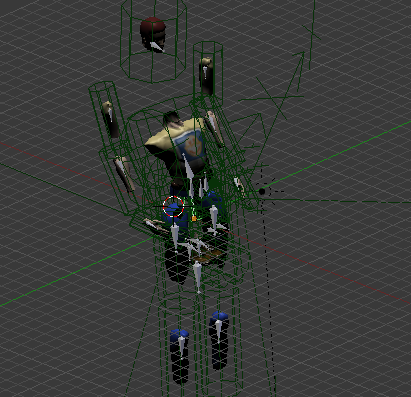 So I tried a few things and realised that I can scale the objects in 2.59/2.60 to 0 but they are still persistant. But when I scale them to -1 they collapse to a point.

When I scale all body parts to 0 and set the armature to ‘Rest Position’, the human looks right (of course not in ‘Pose Position’). But sadly the Human dissapears in the Game Engine. I can then load this in 2.61 and get the same problems, but the meshes are shown.

When I apply the Scale in 2.59, the object get bigger. I can do this unlimited times.