So I have sometimes small GUI/UI ideas, and I haven´t compiled blender since I was on OSX. (nowdays on Win and I dont have a build environment yet)

So for a experienced blender dev these small coding projects should/could be easy to implement if you´re familiar with the code base.

Here´s the first idea, re-using the pipett/eye-dropper icon next to wherever you have object selections in the modifier stack. Functionality would be in very large scenes where naming convention has been a long lost art, but you want to put a Curve modifier for example on an object and you have already made the bezier curve object and have everything in scope infront of you … instead of trying to figure out which curve is represented in drop down menu,

just click the pipette then click the Curve object in 3d viewport to assign it as the object for the modifier. 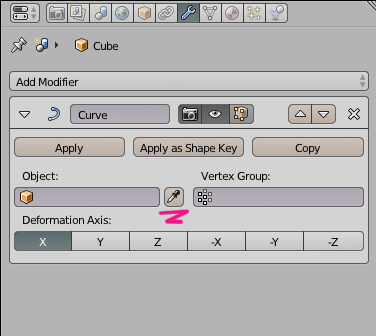 The dev that fixes this, and code it well so it end up in trunk will get €5 from me via paypall or steam! (I hope you can send money over steam, otherwise I can buy you a game as a gift)

So the flow would go

same goes for all the modifiers that can have object inputs

Sounds like a great idea though I think the dropper should be changed a little to denote that it is not used for color selection. I can forsee that being a source of confusion to many ppl.

but it´s the functionality of the eye-dropper which is what you kinda want, you know if you click it you have to “sample” something.
Otherwise some optional icons are

and the Mouse Cursor should actually change, from pointer to crosshair or something. So you know you´re in selection mode. Or that Cursor with a small ? question mark next to it. Or Hand Cursor

Best would be click pipette icon, system cursor goes from arrow to crosshair and you click select the object you want to use.

+1
Another area where this could be used is setting the depth of field in the compositor. Dialling values is much more cumbersome than just clicking into the part of an image where you want your focus to be.

edit, don’t worry about the 5euro’s. or donate to bf instead

Can this be officially in the trunk Campbell? would be great.

fantastic idea, i would only ad a preselection highlight that would visually indicate wich exact object you’re picking just by giving you a green outline to the object that is about to be selected =)

I like the idea, and am glad to see it implemented so soon! Thanks ideasman! (an ironic nickname, in the context of this thread :D)

just awesome! I don´t compile myself though

is there a way this can be added to trunk? If you have coded it the code is probably just gonna be committed w/o any checkup

since you THE core dev. I will donate the €5 to the foundation

(you just missed out on getting FEZ gifted on steam, it works under Linux and is just awesome!!)

@nirenyang it´s not about graphics vs characters

it´s about adding an additional scope to quickly apply modifiers using objects, not just a drop-down selection/search scope (works for like 99% of the times really good) but in a messy scene being able to just “hand pick” objects from 3d view.

basically, it´s just another option I would personally like to use.

@cdog that´s an amazing idea! if I am thinking of what you are thinking it´s in the node compositor preview node right? to be able to use the pipett/eye-dropper functionality to click and sample a Z-depth from the Z-depth render pass and that value is used for focus blur.

if not if you mean in the 3d viewport for the camera sterlingroth´s add-on will work.

@eletronicpulse that pre-selection visualization is missing though throughout blender but it would be nice! it doesn´t have to be green it can just use the selection color from the theme.

actually this would really help with selecting the objects I use for modifiers in 90% of the cases almost.

Empties, BezierCurves/Paths, which are thin and can be tricky to select (if you are sloppy and have no visual feedback)

Yes, I meant in the compositor (something like this is possible in photoshop). I’m also for inclusion of Campbell’s patch to the trunk - there are so many places which would benefit from this (selecting bevel profile for a curve, even the focus for DoF, some nodes in the compositor which need object (mask, track) input, etc.)

@eletronicpulse that pre-selection visualization is missing though throughout blender

Changed the code, now its only keystroke access (Ekey, added for color buttons too),

Both me and Ton are not so happy to add more buttons & clutter, see:

Ton is interested to have some way of showing buttons only on mouse-over, which needs some further investigation.

In my very humble opinion, interface elements appearing and disappearing on mouse-over is a good choice just to make confusion.

A small icon like the one in the image posted is not so bulky and is very useful if it is visible.
EDIT: And sincerely I’d prefer the one posted by aermartin, separated from the name, and maybe colored.

@sourvinos, yes, also if you want to click on the button directly above… thats why it needs some investigation.

Am not really happy with any of these options, though IMHO eyedropper in search popup would be the best and its similar functionality to the color picker too. of course you would only see this for button types which support it.

Edit: It should not happen that a user needs to wonder whether and where a certain function exists or not, it simply should be clearly visible.

I think having the eyedropper in the search box is a good solution. It is very consistent with the eyedropper when used for color selection, and it doesn’t clutter the top level UI

I think having the eyedropper in the search box is a good solution. It is very consistent with the eyedropper when used for color selection, and it doesn’t clutter the top level UI

But this way you miss half of the advantage, first you have to push the drop down menu, then to go to the viewport.

EDIT: I am not an expert on the matter, I can only speak from my experience, though I think that one of the things that makes blender so difficult to new users is the habit of hide things, for instance, the search function: although the spacebar shortcut is very easy, a simple icon in the top header would be very welcome IMHO.