Usually when I have a question on Blender I’m able to find it, but can’t seem to find anything this time. In a nutshell, if I were to split one object into pieces, would there be a way to apply smoothing over the pieces, so they would still appear whole?

I think what you might be looking for is the Bridge tool. If you have multiple meshes…you can select a loop on each side and then bridge them.
http://wiki.blender.org/index.php/Dev:Ref/Release_Notes/2.63/BMesh
and check “Bridge” section.

Unfortunately on most of the occasions this will break smoothness of the surface and seam will be visible. This is due to darker blue lines - vertex normals. It is not possible yet to adjust them - they are calculated automatically. Lighter color faces are ripped on loop.
If that helps. 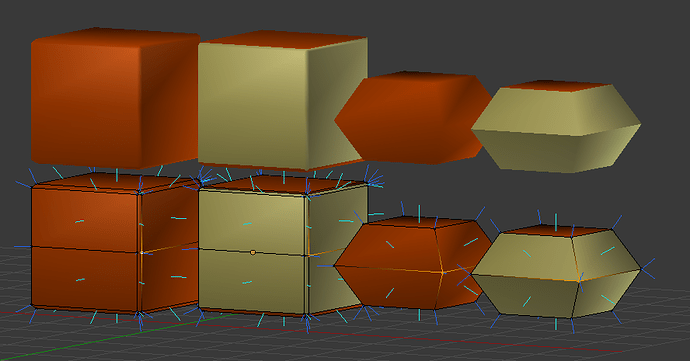 No, bridging isn’t what I was looking for, but thanks for the reply biker.

As for eppo’s response, I was afraid that would be the case. Thank you for the answer.

Perhaps this would help http://www.blenderartists.org/forum/showthread.php?317051-Script-to-adjust-vertex-normals-for-rendering

This is the most horrible kludgy workaround. But instead of splitting the object you need to duplicate it and assign transparency to the faces appropriately. This maintains the normals as they were. If poly count is an issue you can retain a single row of faces only next to the edge to make transparent.

The issue is I’m modeling for the Source Engine, and I want to split the top of the head split off into part of a bodygroup (alternate models built into the base model that can be switched around) in order to have several different pieces of headgear possible (while keeping the original hairdo intact). Because the head has the eyes on it, it can’t be in a bodygroup (the model compiler complains and doesn’t spit a game model out if you try to define eyes and they aren’t on the base model). I’ve had the thought that I might be able to split the head from the eyes, but this would have a lot of problems.

For starters, I don’t know if you can even use flexes (shape keys) on bodygroups. If you can, then there’s the problem that there’s four different copies of the head (and its flexes) in the one model file, and that would bloat its size pretty badly. Not to mention if I needed to alter the head’s base model or its flexes, it’d be in all sorts of pieces (as opposed to two, where the part that would be split off for the bodygroup doesn’t have any flexes on it, so it’d reconnect pretty easily).

I remember reading that in Source, each triangle has its own vertices (every triangle is separate, even if they share a vertex/edge), and the normals determine if the area is flat or smooth shaded, so I was hopeful there would be a way to do so in Blender. I’ll definitely try your script JA12, but I don’t know that its effects would “survive” export from Blender. I’ve also had thoughts similar to your suggestion DruBan, I don’t know that what you said would work, but I’ll definitely give it a try too. Thanks for the help, both of you.

Edit: Well, the script didn’t work, but I was able to get it working based off of Dru’s suggestion. Essentially, assign the triangles that need to be separate a new “temporary” material, and after exporting from Blender, going into the files and manually moving the triangles from one file to the other with a text editor (the temporary material making them much easier to find, especially with Notepad++). It’s a bit of work, but at least it does work.