Hello, everyone in the Community.

This is my first full render posting!

I present to you another Blender rendering I did in Cycles. But, first here on this forum, using Snow and Ice in a scene. This took forever to get right, approximately 2 Days. The lighting Rays was a pain, but I managed to do it anyways.

I had a hard time with this one, and had to find online information on materials, to get the Ice to look right, I am still not too satisfied, but it looks really good I think, could be better. I did have problems with render times due to all the Gloss, Transparency, and Glass Shaders. The Snow, Ice, and the reflective cave-like walls was the number one killers in the scene. I tried reducing polygons, to improve render times, but it was a very futile attempt, but helped a little.

I was determined to get it done before I went to bed, and here it is, enjoy! 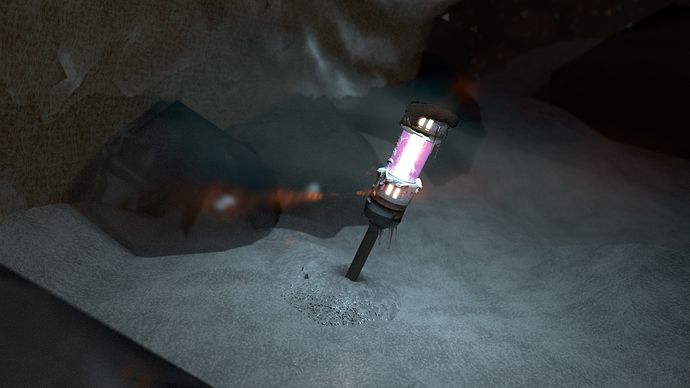 P.S. In future I may be making a short animation with the Camera and lights with this, but not sure if I am up to it just yet, as the render times, 1 Hour per frame would be insane, and I do not wish to use the Blender Internal Render.

Are you using GPU render in Cycles? I had a GTX 560 Ti and it rendered even complex scenes pretty fast, so I would recommend making sure CUDA is enabled.

I was using the GPU for Render, and it still was slow… This scene has a lot of gloss and reflective surfaces, not easy to render, perhaps I could share the original .blend so people can see what I went through. Currently I am trying to figure out how I can mix the light rays glare with the other video render if I am to render all this as a video.

But before I can make a video, I need to figure out how to speed up the render, I could speed it up by half if I render at 720P instead of 1080P…

You could reduce bounces, that can save a lot of render time. You could also try the 2.69 release candidate as I think the branched rendering is much quicker. Also, is your tile size 256 x 256? Otherwise it won’t use all of your GPU.

I made it into a video, here it is on youtube: