4th and last (but definately not least) my game idea… which will later be moved to the WIP thread in the Game area.

Story:
The worlds resources have deteriorated, and is causing the world to band together in a last ditch effort to bring peace to the world, and ensure humanities survival (big surprise there)

Chris Santon, of Burvez Street, Sarasota Florida (dont know if that exists) has lived a boring life as an astro scientist, with a great history in oil research, resource discovery, and graduated from an Ivy league college.
As part of the last ditch effort scientists are needed for this final mission of IASA (international areonautics and space association…formerly known as NASA) In a last ditch effort to save humanity and find resources to maintain human life (or a planet that has these things and can be mined)
the current planets that have been mined beyond repair? Venus, Uranus, and a couple others. this will be Earths first attempt to leave their solar system.

this is where we start the story. Chris Santon wakes up. It is icy, and is snowing everything is black, but he can hear these things, and can feel the cold (we can tell this by little ice lines on the edge of the screen, and slight shivering sounds) as he opens his eyes (of which you ever view out of) he can see powdery snow, and sunlight in his peripheral vision. he pushes himself up slowly, and pushes a hand off to the right to steady himself. you hear a ding of metal, to know that he has found something there of which he will be able to hoist himself on. As he stands he looks towards the metal, and you see Chris Santons face for the first time. (or part of it) He is wearing a full space suit, slightly more advanced but not much (as this is not far in the future) There is a busted part of his helmet, that allows you to see some hair, one of his eyes, part of his nose, and the upper part of his mouth. There is blood on his cheek and he has NO clue what is going on.
The player takes control, as Chris turns his view to the snowy desert (or plain if you will) around him. The first objective is to Find Warmth.

(one of the main Ideas of this game is to allow simple objectives, that are easy to remember, but also keep the player guessing)

the rest of the story continues where Chris spends 90 percent of the game just trying to find out where he ended up
(he is on Pluto by the way, which has been mined extremely much and is sodden with ice and wasteland, along with abysmal canyons, caves, and more.)
Pluto was said to be mined too much. So much in fact that no human could live there, space suit, space station, or no.
In truth, the government sealed it after discovering (on accident) that there are being still alive on this planet, and most are not friendly. In their attempt to close off this planet, they leave behind many miners (who have now gone crazy) and will also attempt to kill Chris as he partakes his journey. In the end he discovers that he is on planet pluto (as he dies OH NO!!!) and that the government sealed this place off. the only thing left of his story is a tape recorder where he records the entire story and is found years later by a news team, that finally finds out about this government cover up, and decides to have a look. (in the VERY beginning, you will start in a room with news castors, and the tape recorder, and they will say “This is all that was left” and then you start the beginning video as Chris.

as he goes through his story, you uncover memories of the wreck of his ship (which passed by Pluto way too close, due to Human computing error or HCE, and causes the initial wreck) of the press conference before he leaves earth, of his life, and of other things. In the end he discovers everything, and brings to light one of the biggest government cover ups EVER. Although he does die in the end.

On his journey, he meets 1 sane person, who is sane enough to kill themselves before they suffer his fate, and a lot of scary hallways, freezing tundra, and odd space suits and upgrades and weapons hes never seen before.

the genre of this game is the following
Horror, Sci-fi, MFPS.

also, i really want to keep the player confused until the end of the game.
the engine to be used is UDK
and models made in Blender.
also might use a little bit of Havok.
In short this is the workflow
Alchemy [Character design]
GIMP [Textures, bump maps, and more]
Blender [Mesh Creation, UV Mapping, Rigging]
UDK [ AI, Main Engine, and more]

Tell me what you think, as I try to get to work on my first idea!!!

It’s great you have a story and all, it’s a good story (love the idea of looking at your spacesuit as a gordon freeman kind of character) but that’s the wrong way to go at a project. The first thing to do is create gameplay. Make a prototype only conveying the main mechanics at the core of the game; this stage may or may not have graphic assets. Make sure the prototype is fun, the movement is crisp, ect. You may have all your ideas out, how the stories going to progress, all that, but it’s all going to cave in without strong core gameplay. You’re making a game, not a book. No matter how good a game’s story is, how amazing the characters are, how spectacular the graphics, a player will leave early or end unsatisfied without good and fun gameplay at the core.

I wish you a lot of luck, I really enjoy the story, but it’s important to start on what makes a game a game.

thanks for all that. Thats my problem, is I dont know where to begin, because I have never really dabbled in the Game Engine. EVER. So im at a loss making things low poly, baking texture maps, and baking ambient occlusion. So what I need is some help in getting started

I know Im not writing a book, but I believe that if a game is going to be interesting at all, it has to have a great back story. so what I really want help with is concepts, and visuals, and then a start (like someone making the first character (Chris)) and then baking the textures so I can learn pretty easily how to get a good low poly beginning :P. I think after that I should have it pretty easy, as I know how to texture, but I also know that the bigger the texture the longer it takes to calculate so the play speed will lower the higher res the image.

Also thank you SO SO much for actually taking the time to read it all. I knew it was really long (a wall of text haha) and i know it can be pretty boring taking all that time to read it.

heres a blend i put together last week with fps movement, mouselook, shooting, gun-hud, ect. just a little sloppy is all, and not ocmplete, but you can use it to play around with and see how the bge works, and you can put your models in it to see how they look in the engine, feel free to use it any way you like, the script is from a blender tutorial site, and the textures and all are from around the net.

if you need any help adding things or making things work right, I can be of some help

Thank you this should really help. Im actually going to start looking through it now, and Ill push it through and test how it works and all thank you

no problem, iv learned over the years stinginess brings nothing, so im willing to help and provide anyway I can to those in need

this is very smartly done, I am currently trying to figure out how to add a character animation so that when you walk you leave trails in the ground like snow

Well. Let’s see. You need footprints in the snow. One way you could do it is have an empty parented to each foot that when collides with the ground leaves the footprint textured plane. That would be one of the easiest. Or you could do something simular with the empties, but use something like tje bullethole script. Which might be better, and more accurate. I’ve never tried something like this, but it seems one of those ways would work. I’m sure someone else will have a better way. They usually do, but I try help out as much as I can.

Oh. Yeah. Thanks for helping with thee title for Mid Drift too. You’re still in the credits.

Oh cool, ok so here is a picture, of the first map (basically a desolate wasteland of snow) my problem is that when I try to use noise to change the Specularity and the way it is effected it doesnt do anything to it?
Tried it a couple ways , see picture for more info 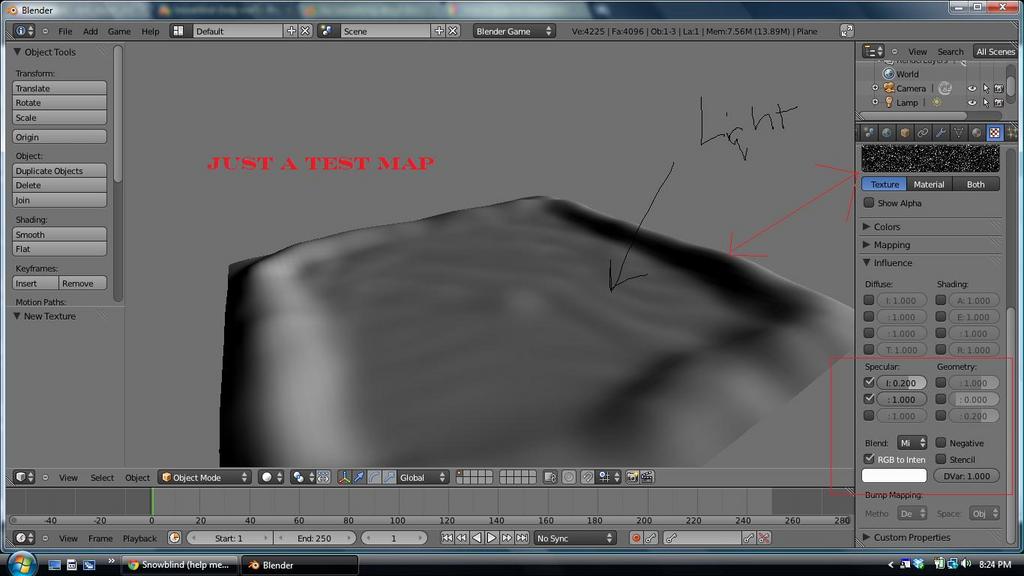 is the display mode set to glsl? that usually solved my problems in light and texture rendering

on the note of the foot prints, look at how the bullets work, and that may be of use

no lighting is set to regular, ill try changing it