It’s been some time since I have been here and since then I have been on and off of blender and this is my latest serious work I have put more then ten minutes into.

While I am used to doing SMC’s even if it is by myself I have spent over twenty hours working, reworking and adjusting old models or rebuilding from scratch. Although those hours were across a year now since self-esteem has been in the floor saying hi to the other dead people. But that’s not why we are here!

I’ve been trying to get a few things operating as this is both a learning exercise as well as a scene I am working on for a little story I have in my mind. So it looks un-textured right now and well. It is, I have never learnt how to texture and I tried many times on this but I can’t seem to nail it down to get it to operate. For example I tried to add black soot along the cowling of the engine bay however it didn’t want to seem to push through the normal texture even with a add/mix modifier in the nodes. I won’t deny I haven’t really looked into texturing since I am focusing mostly on the model itself right now but I believe it is at the point it is capable of critique assuming you would be so kind. 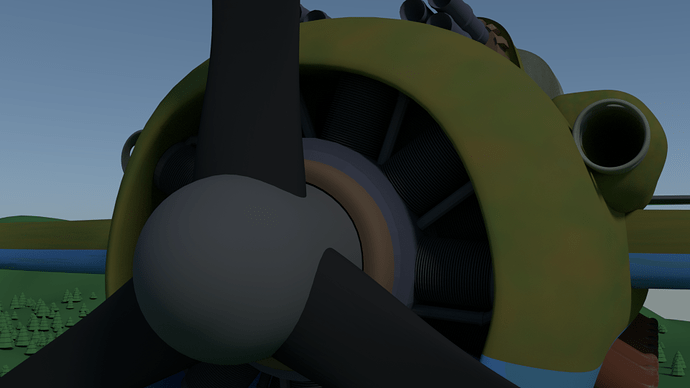 This part has been the most fun for me, the engine was a time sinker from research and fiddling with the piston housing. The blades too became a big focus of a few hours trying to perfect them and even now they are limited and rather bland due to their nature.

The spinner was left bland right now as it’s not a finished item, I need to figure out the rest of this compartment before I go onto designing that differently but as it stands it provides a good point of critique if you have any suggestions for such a area. 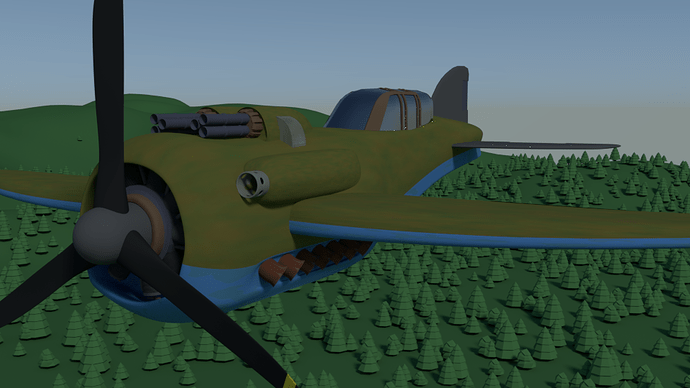 (Note: Background is for personal perspective. Temp and will updated when scene is ready to come into place.)
The hull itself has gone through many versions (First & Second) but I think the one it is on now is far better then the first. Also uses less verts and what not.

So the first thing I guess I should talk about is the vessel’s purpose. In the time I spent on this I have developed a story on the side to keep motivation up as high as possible to push towards it’s finish point where I could perhaps one day practice animation. However for now to keep it simple it is based off a Crimson Skies’ Bulldog model, at least the front and body shape. It varies in a larger wing span at the front and no leading edge on the elevators, also it is a closed cockpit however I am tempted to really put a challenge in and model a open roof version. The twin auto cannons and heavier single shot cannons were all put on in the design of a blitz vessel, designed to bring down blimps in the world it is being built for. hence the size of the weapons compared to the vessel itself, it is a short range craft designed to get in and out with minimal damage taken. 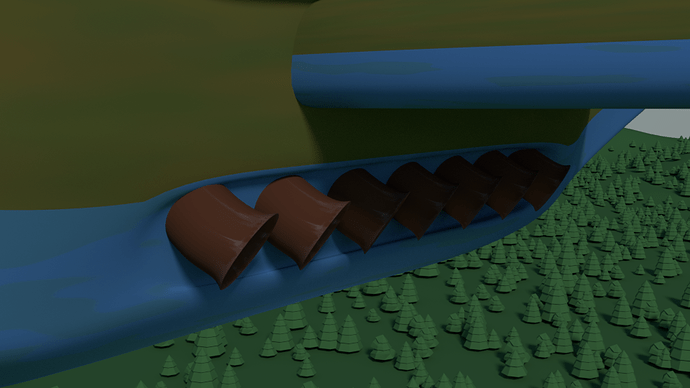 This is one of the examples of the texture attempts, looking at it now it pulls close to how I intended but I was after a different colour, I am sure adjustments of nodes can further get this to operate how I wish. Anyway this is a picture of the exhaust system I have planned for the craft and it also shows the join point for the wings, I am trying to think of a way to make it more seemless, any suggestions?

Anywho! I hope this is in the right location, hell it wouldn’t surprise me if it isn’t it is so clearly unfinished but I am struggling to continue with out actual critique of how it is going so far. I thrive off of suggestions, a think tank able to build up my confidence further to push on and be more daring.

With love and respect,

I find when trying to make things connect in a seamless manner, using ambient occlusion helps or even to model yourself a minimal protruding ‘ring’ around the end of the object where it will connect for a ‘welding’ kind effect.

and the scene needs textures