Something I’d like to buy… but I can’t and I wonder why. 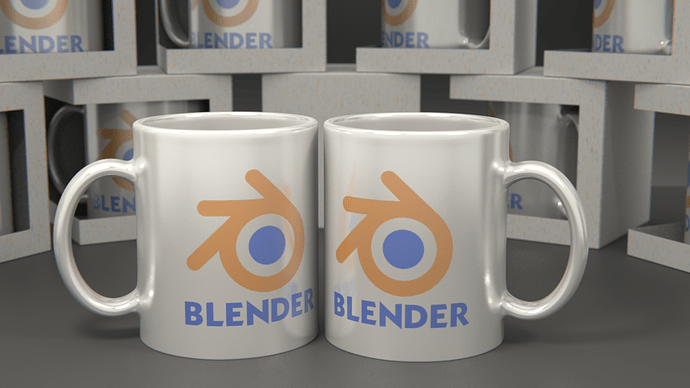 Yeah, I know… This isn’t a picture for the gallery. It’s just an idea I got when I recently realized that I was still drinking my coffee from the mug that I bought during a commercial operation of a fast-food chain… last century. (It was used as model.)

I can have such a mug from a “mug printing” company but I think that it would be better if the Blender Foundation earned a percentage in the process, don’t you think?

I wouldn’t say no to a new mouse mat either… but that would have make a really boring picture.

Agreed!
I dislike the design and the render (sorry I don´t want to bother you on it) but the idea is great! I would buy a blender cup as well.

Could you be more specific about… well, everything. A vague criticism is very frustrating for an artist. I couldn’t resist to the urge to change my image already. Different lighting… but it’s still an utilitarian render.

As for the design, I can’t do much. A mug is a mug… And Blender’s logo with Blender’s colors and Blender’s name. What else? I can change the font tho…

Interesting color/shader on the mug. I’d buy one as well. Butt ugly or not. lol

Nice work, but IMO the mug would look a bit better with a less rough glossy shader, because at the moment it looks more like cheap plastic than ceramic. (or were you aiming for that?)
Great idea! modelling is fine.

Nice work, but IMO the mug would look a bit better with a less rough glossy shader, because at the moment it looks more like cheap plastic than ceramic. (or were you aiming for that?)
Great idea! modelling is fine.

sorry, accidentally posted twice when I pressed the back button.

@Jamosium: I reduced the shininess because the mugs in the background looked too metallic, like paint cans. Your post made me stare again at my picture… and I made some changes… again!

New HDRI without blue sky, no background mesh, more gloss on the mugs. (This thread is turning into a WIP.)

But I’m still not satisfied. The ceramic looks so much more shiny than on my real mug.