Hello everyone, I am participating in this contest BG on video - games … Well, I would like suggestions, tips, or something else to add. 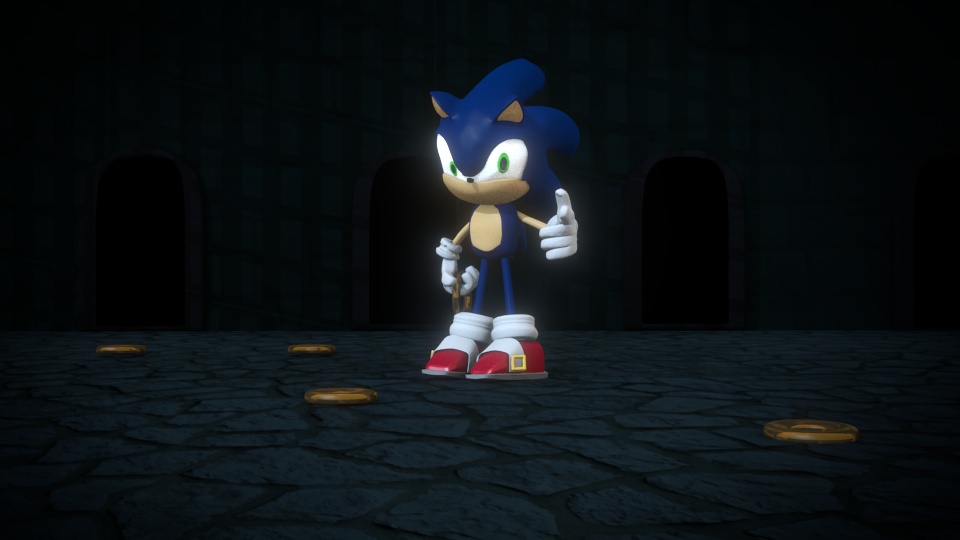 I’d like to do something at night, so I’m taking this as inspiration: 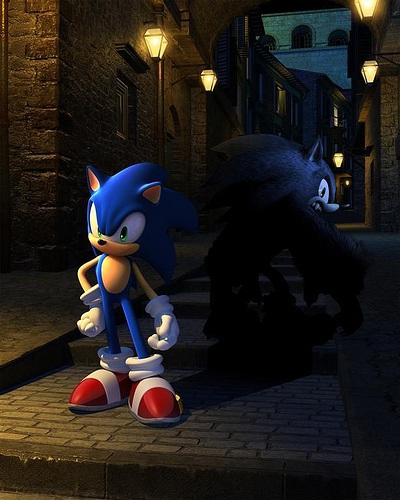 The fact that this is inspired by Sonic means that the rings lying neatly on the ground feels a bit off (compared to the games where you have large numbers spinning at chest height). The fact that their shading is dark doesn’t help much either. The fact that the background resembles wallpaper as of now also feels somewhat off as Sonic levels are richly detailed.

And I don’t know what others think, but some of the local Sonic fans might grill you for your decision to include the werehog (I mean, I don’t think he’s THAT bad and he actually provides an interesting twist to the game when noting his athletic and attack skill-set). In my opinion at least I have no objection to the werehog conception and thus no objection to his inclusion.

Now, it’s a good start, but you need bit more work on the shape of his body. There is a model of Sonic floating out there on the internet. Try to find it and study it.

I agree about the rings, also work on the eyes, lots of tutorials out there… give them some more depth. Plus add a mulitres modifier, sculpt some details. I don’t think sonic needs to go to the pore detail level, but some eyebrow definition, some muscle, it would all add that little bit extra.

noted, minor update of the rings … About sonic template not found until now. (if they can help me find it.) 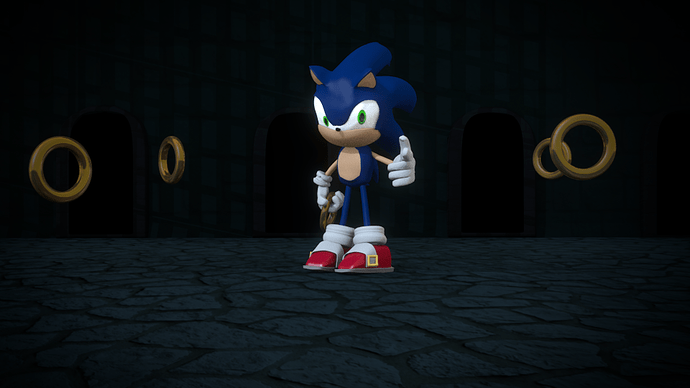 It’s mostly things that have already been said. Try working on the eyes, they are too round and the placement is a little bit weird. The shoes looks very good. The gloves looks a little bit rough tough, try smoothing them a little bit.

If you look at the reference photo you can see there is a slight ridge around the eyes that distinguishes them from the head. Also the chest is round where yours looks very flat which detracts from the quality of the model. The ring he is holding is kind of hard to make out initially so you might want to extend that hand out a little more and tweak the lighting. You may want to look into using an environment map to help with the reflections off the rings since they appear somewhat dull. I think you have a good start though. 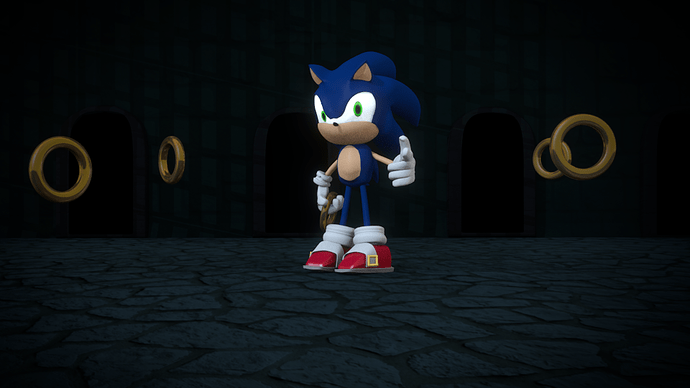 Hello again. Some changes around here! Improved the belly of sonic, I’m also improving around the eyes, and the glove, left a bit less harsh.

I wonder, what do you want me to improve on the lighting. Soon more updates …

Give the rings rotation and add some motion blur to give the effect of spinning rings.
Sonic’s eyes look luminescent here and that is slightly creepy in my opinion so you may want to pull that white towards a light grey.
If you look at his hair(?) in the reference picture you can see that it has a sharp highlight as does the rest of his body. You also need to give his body some SSS if possible.
If you look at his shoes they’re supposed to be more rounded and in yours they kinda slope straight to the ground whereas in the reference it is more rounded like an elongated, round-ended cylinder.

Other than that it’s fantastic!

Hello, updates here! I modified the shoes, I added one of those springs he jumps (jumps and how), I put a light gray in his eyes, and added SSS him … Hope you enjoy … If they can speak more suggestions … 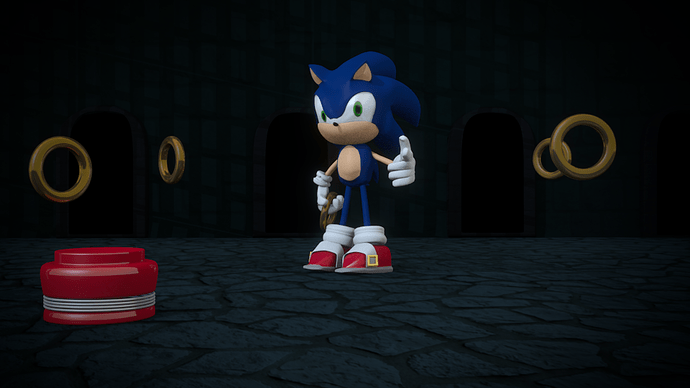 The tip of the shoes looks concaved and the spring it self looks weird. I want you to take a look at this picture and look at the shoes on Sonic. 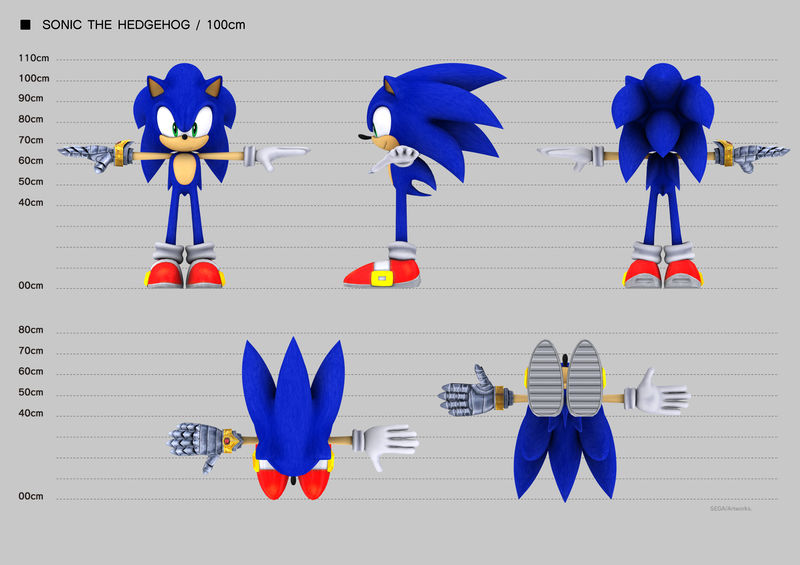 Compared to the shoes on your model and the shoes on the picture I posted, there’s not much of a curve to provide room for his toes.

As for the spring itself, the coil is too big and the top of the spring is more flat and smooth instead of a button. Here’s another picture to show you what I mean. 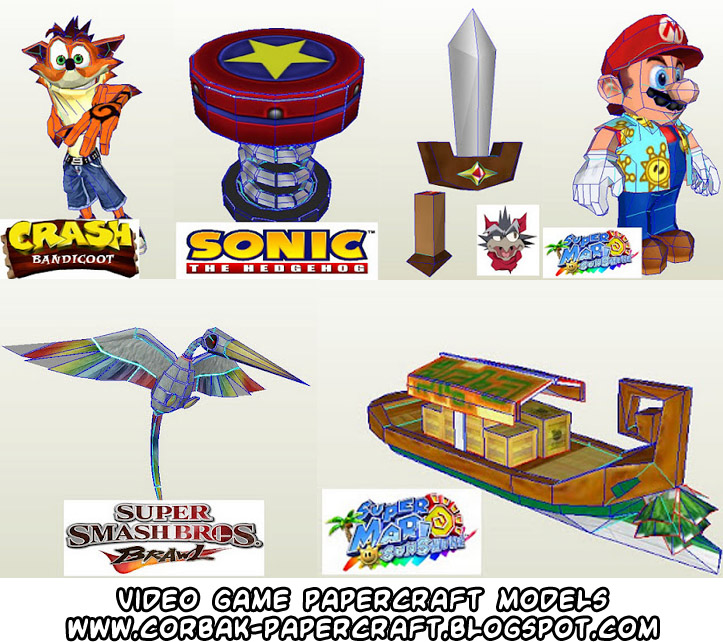 Hopefully, these images can be helpful to you.

Returning with updates … A bit of work trying to fix the shoe … I put a few posts ago, and improved the jump as requested … What do you think? 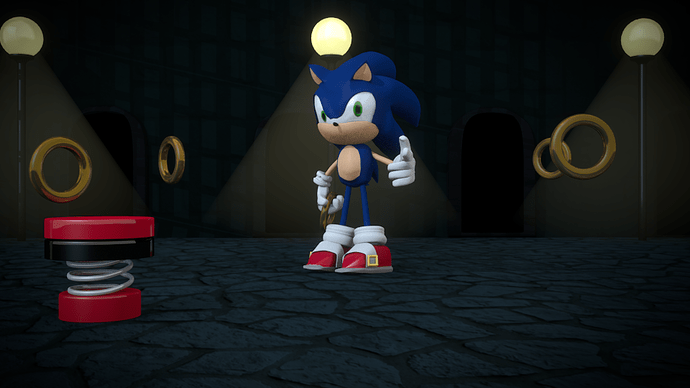 I think the lighting could use some work. It looks very flat right now. Check out your inspiration image, there’s a very distinct light direction. The main light is coming from the top left front, casting rather hard shadows. Then there might be some soft fill light from the lower right. By using a hard main light from the side you can help push out the shape and contour of your model. Maybe experiment with that? Another idea would be to use the nice springy thing and do a more dynamic shot with Sonic jumping off that thing

Hello all, new updates … Put a more uniform light, added a jump back and had the idea to put the “SUPER SONIC” just to get attention … What do you say? 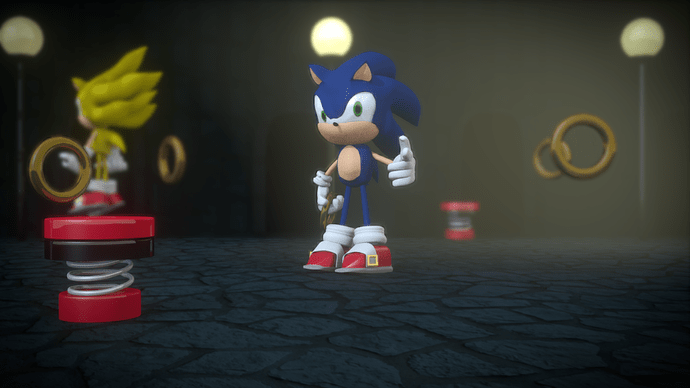 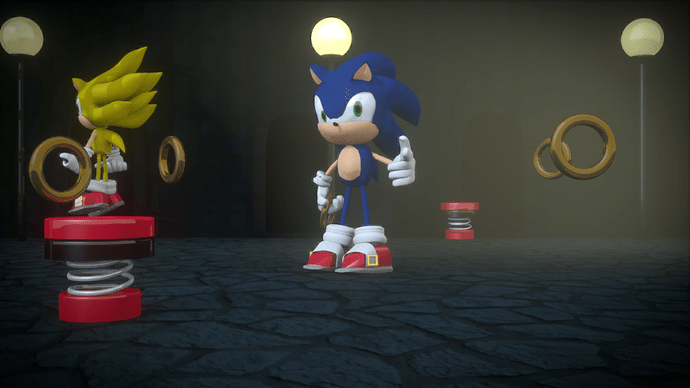