Hi everybody, well Im quite new in blender so it maybe sound a little bit dumb, but how can i end with the transparency mode in Edit mode, its quite dificult to see what Im doing like this, so please anybody could help this Blender noob???:o

If you want to see through you object just hit the Z Key. And if you want the opposite, then hit the little button to the right of the faces, verts, and edges buttons. The occlude geometry button. Hope that is what you wanted

Thanks a lot mate, the Z key trick I used a lot, but then I got the Creature Factory and i saw a lot of new techniques but as I said it was really hard to do something with the unocluded geom, thanks again man…

And maybe you know how can I render a turntable of something, i cant get my meshes in turnts!!!

To make a turntable, add a curve (Space Bar >> Add >> Curve >> Bezier Circle) Then scale it up till you think it will look right and place it over your object. Then select your camera with the RMB, and then Shift+RMB the curve. Then press Crtl+P and select Follow path. Then select the camera and press Alt+O and it should snap to the curve. Then hit Alt+A and see what happens. You can adjust the speed by selecting the curve and changing the Path Length. Good luck!

Thanks again man, Im doing what you told me right now and Im gettin all that I wanted, thanks, that was one of the last things I needed to get out of the paid software, maybe you know how can I transfer maps from a Hi poly mesh to a low poly one??? or a site where I can fin a tut???, and sorry for been a pain in the ass, but well Blender has its side effects (hard addiction)…

To occlude background geometry, press the cube icon that is located aside the selection mode icons.

already answered that one egan, like 4 posts ago. Maybe reading everything before answering would help.

I think this (click) is what you are looking for. Hope that is it

Thanks a loooooot people, it will really help me, specially the part of the normals, maybe im gonna post some imgs of what Im doin now but well maybe…

Yea dude, go for it! Post a project you are working on in the WIP section!

Well Im with another problem here, ive already posted in another thread but well, i really need some help, I triy to extrude some faces alonside their normals but for some strange reason they didnt go straight to their normals, so what Im doing wrong, please help here dudes!!! Ahh I almost forgot this, it only happens when I try the region extrude, not the indicidual faces mode…

hm… Can you post a screenshot or .blend file of the problem? I am not sure quite what is happening .One thing might try to recalculate their normals (Selecting everything in edit mode and clicking Ctrl+N). Hope it works! 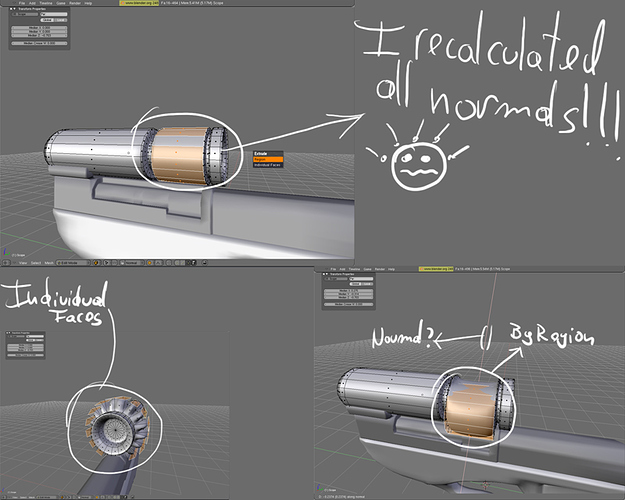 Ah one of these problems. I hate these ones. But they are easier to fix than you think. When you extrude right click then hit the S Key. Then constraint to Two axis. Yes two. Hit Shift+Y (Or Shift+X… you will have to experiment with it) to constrain against the Z and X axis. That should give you the result you want. Good luck!

Yep, that was very useful dudebot, I think Im a pain in the ass, but well thanks a lot man, you’ve really helped me out.

No your fine. I love helping people, that is why I browse this forum. If I wanted to get away from you I could very easily. Don’t worry about asking too much. You are here to learn and I am here to help. So ask away

Glad it helped! Anything else don’t hesitate to ask!

Sure dude, im gonna ask a looot, thats what i really like about this forum, I added the Marathon 2magnum Im workin on now, its on the wip section, if you wanna drop by!!!

Yea sure! I will check it out! And it’s no problem, go and ask away! I will answer away