I have been working on Game Dev for a little while in BGE, but I am starting a campaign online because I really want to focus one of my projects and improve my skills. It would mean a lot if you wanted to follow or support my project.
Campaign Page
Discord 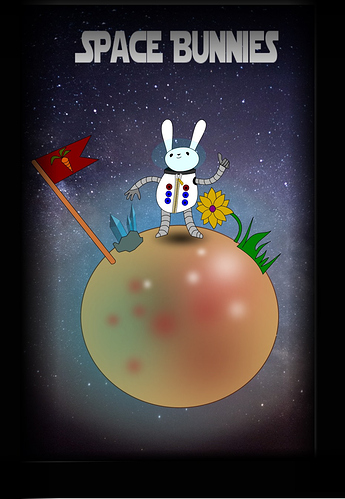 so… is this game going to be done in (up)BGE?

Development thus far has been worked on in an older base version of Blender. I have been considering switching to upBGE, but I have had a little trouble getting it to function on my Linux Mint OS. I suppose if I tried harder with a little research I could get it working. I have heard that it is much better, and I am glad that it means that the community is not letting BGE die.

right now the upbge scene is pretty chaotic, you may have to build it yourself. linux builds have been scarce.

One aspect I decided when I started programming was that keeping the same camera was important to me. I remembered seeing the illustration of “The Little Prince”, how it pictured the little prince on top a miniature planet and depicted a world that was quirky and imaginative.

In most video games, designers take the liberty of loading a new scene when you enter a building or entering a new region of the map, but I have chosen to only do that minimalistically in order to create a the specific tone I prefer to convey.

Space Bunnies gives you a solar system view and will allow you to zoom in on planets to travel them or your ship to manage your crew. The only time I will probably choose to omit this feature is regarding to travel between solar systems.

For space combat, I have a number of models too look at. I am most interested in the classic game in which you are a flying ship with left/right controlls dodging and shooting enemies as they come down from the top of the screen. Although I’m ditching that whole movement scheme, I was looking at that game style for the strategy in shooting. I wanted the strategy to be more about maneuverability and directional aiming, and so I looked at four different types of weapons that I want to consider.

The movement accelerates as you press an arrow button once, and slows down over time (expending fuel to speed up and then losing fuel over time.) So, during space combat, there will be a number of factors to consider for the player:

Shield (or hull integrity Instead of health)

The enemy AI, in addition to having player stats, will also need to have a randomized behavior for movement and attack, and that is a different subject.

Thank you to my campaign participants. These are some early models I will be adding to my game as interactable characters.

I appreciate the support, and enjoy having input from others. I will be adding and changing more content based on your participation and input.

Above, is a concept graphic for how I want to plan to interact with planets. It makes it too simple if you can see every planet clearly and know whether the planet is occupied as well as the enemy strength. I want to encourage an element of exploration, revealing planets only as they are explored or if they are owned by allies so you don’t start fights with NPCs you want to keep as allies. 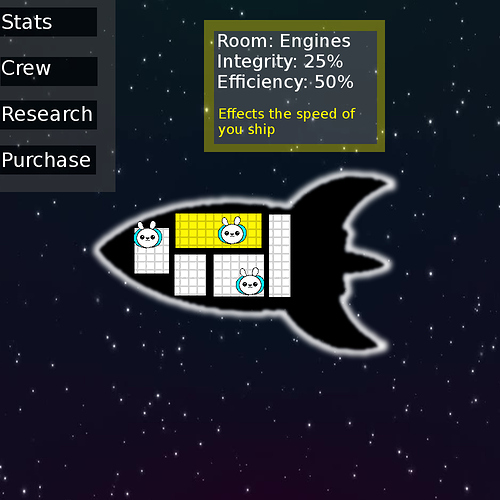 I’m not sure if it’s true, but I heard BGE does not allow the sale of any games made with it. It’s something to do with the Blender license. I like Unreal Engine a lot.

Seeing what you have done in BGE is really impressive. It impresses me enough that I’ll say if you wanted to make a game in Unreal Engine we could probably knock it out in one week if we really wanted to. I can do pretty much everything in Unreal except the odd times where coding it would make it run much faster than blueprint. This is your strong suit so we could be good partners. Send me a PM and we can talk on Skype if you are interested. I’ll show you the game I’ve already made in the past.

I’m not sure if it’s true, but I heard BGE does not allow the sale of any games made with it.

This is not true. I don’t know who keeps spreading that misconception.
In short, the blenderplayer needed to run the game executable inherits GPL, but not the game itself.

Thanks for clarifying, Liebranca. I have been a bit confused about that.
I am not intending to sell this game however, I am going to be distributing it openly after I am finished with the campaign goals. The campaign is more to get moral support and community involvement rather than to gain money for my work. I have put so many hours into game dev anyways, that any amount would seem like too little to match the time and grief gone into a project.

In short, the blenderplayer needed to run the game executable inherits GPL, but not the game itself.

Heh, depends what you call “not the game itself”.

To make it simple, any script that does import bge becomes gpl, because linking to gpl makes your code gpl as well, and it transmits from file to file like this. You can distribute gpl code, but you must also distribute your sources with it.

Assets are not affected by this as they can be seen as side data.

that’s why people make launchers, or use libload to get around the gpl issue of the used .blend file for the .exe.

any script that does import bge becomes gpl

This is categorically untrue. The European High Cort recently decided, under no uncertain terms, that an api cannot be Copyrighted. If the Cockpit Clause relies on the Copyrightable of an api, then Liberty or Death has been triggered in the European Union. If this is true, then Blender cannot be distributed in the Eu, at all, by anyone, ever. Not even the Blender Foundation. All its going to take is one Troll to cause this who Gpl malarkey to come crashing down (Its posible it would become Public Domain due to Historic Right of Way, but that would depend on the Judge). In the Usa its less certain, but an api is probably considered Fair Use. Copyright violations are not illegal unless someone actually sues you. Almost no one who knows about Copyright Law would pursue this. Would you personally peruse this? The only organization that can say import bge is a Copyright violation is the Blender Foundation, but they should seriously consider getting professional legal advice before doing so.

Messages from the past week did not came over from old forum, so here is my message again. Can I license .blend files myself? Yes. The output of Blender, in the form of .blend files, is considered program output, and the sole copyright of the user. The .blend file format only stores data definitions. In case you embed the .blend file with Python scripts, and the scripts provide bindings to other libraries or facilities, the next topic applies. What about Add-ons or my Python scripts? If yo…

Sorry @littlesprite for the offtopic, but GPL licensing looks complex and @Cortu is spreading non-sense.

@Cortu you completely misunderstood the context. Even if an API couldn’t be copyrighted according to different courts, linking or using a program providing such an API can be copyrighted.

When making BGE games, your scripts -that are part of your intellectual property-, will need to be licensed as GPL if you dynamically link and use features from the bge Python module provided by the BGE, directly or indirectly (because of the way GPL propagates).

any script that does import bge becomes gpl, because linking to gpl makes your code gpl as well, and it transmits from file to file like this.

So any script using as much as a constant taken from a gpl’d source inherits the license? Woah.
That’s pretty hardcore. But ultimately I don’t find it all that troubling. The game can still be sold, and other bge users get to legally copy and paste a couple of py files.

Sorry for the offtopic interruption, and now back to Space Bunnies c:

@moderators i was going to flag this as offtopic, but i didnt want to start a conspiracy

Please keep the conversation mannerly and on-topic, thanks.