This is a first attempt at designing and modeling a space ship.
It’s one of the reasons why I’ve gotten into 3D modeling.

There is still a lot of work to be done but the concept is there.

The general shape is there but I will definitely change it while I’m adding details. Some of the parts are not smooth enough and are subject to change.

I started at the front and will work my way backwards.

One of the first things I modeled were the railguns on the front. I’m actually quite happy with them. The amount of detail is great and I think they look good

I also wonder what the proper workflow is for such projects. Do you completly finish the modeling and adding details before going into texturing and shading or do you finish adding some basic details and then go into shading to get a feel how it looks or do you wait until the modeling process is sort of finished?

Below some images from my progress: 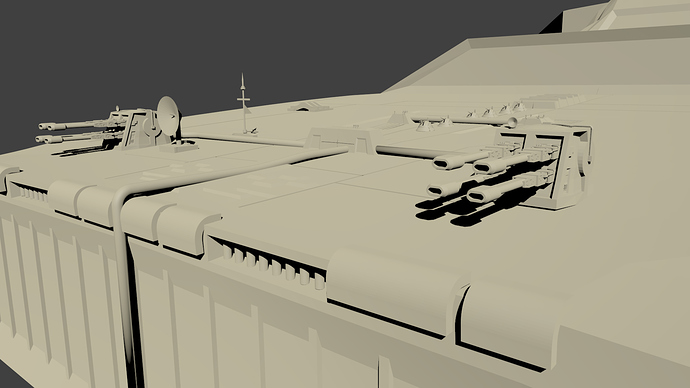 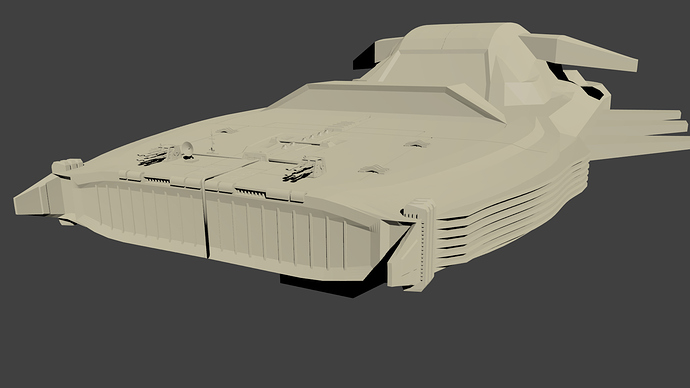 Overall, I think it looks really nice! Especially for a first attempt a large space ship!

The only part that bothers me about the general shape are the wingy-bits that connect to the top toward the back and angle down. Those shapes, the way they are, don’t seem to flow with the shape of the model imo. You might be better off making them protrude straight out to the side and smaller.

To answer your questions about workflow; It’s really up to you and how you’re comfortable with working. In my opinion, it’s good practice to get all the modeling done before texturing because if you have to change a part of the model, you don’t have to worry about messing around with the texture.

It also depends on how you plan on texturing. For example, you can use materials to put down the base texture for the metal, then bake the texture out and put more detail in with an image editor. In this case, you wouldn’t have as much trouble with changing models because nothing is UV dependent until you put it through PS/Gimp. Depending on how elaborate you get with the materials, you might not even have to do much in the image editor.

Thanks for the info. You might be right about the shape of the upper wings. I’'ll have a look at changing them so they fit in with the rest of the ship.

As for the workflow, meanwhile I thought about it myself and the way I organize my models is that the larger objects like weapons are linked from other files so I just have to position them correctly and that’s it.
Because of this, I might just look into texturing some of the models separately, just to get a break from the modeling and break the routine.

The process of modeling in different layers seems great. At the moment I only have been focusing on the front of the ship and putting in all the details but I might change it to what you suggest.

Meanwhile, here’s another image. This is a close-up of the main rail gun on the front. This is one of the biggest weapons on the ship so it would also contain a decent amount of detail.

I’m just wondering if I need to add a subdivision modifier to the barrels or not because in the below image you can see the edges but I am wondering if you look at it from the bigger picture, you probably won’t notice.

The texturing is a quick and dirty one to visualize it. Once everything is done, I will also add more details to the textures. 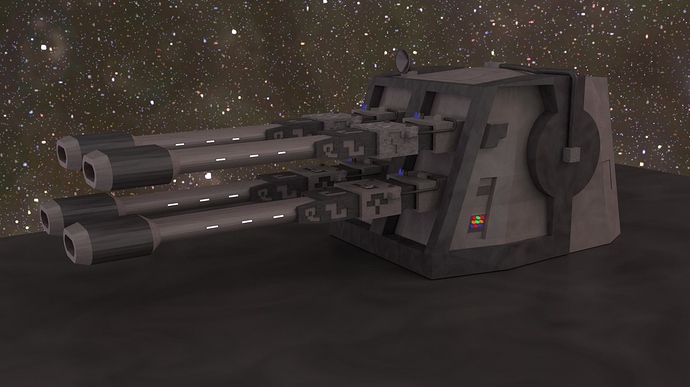 For the visible edges, I’d refrain from using subsurf if you can as it just uses more geometry to cover up the problem. Could be a couple of simple things like forgetting to set smooth, or more likely the Edge Split modifier giving you problems. With the Edge Split modifier I get a lot better results when I manually mark the sharp edges (cnrl+E, Mark Sharp). It avoids the angle weirdness that can happen when you have edges with different angle values all being affected by a single value on the modifier.

I’ve been working really hard on it and there is still so much to do but I feel it starts to look more and more like a proper space ship.
Here’s a view from the back with the engines. That’s the last bit I’ve been doing. It also give a view of how the wings will look like. 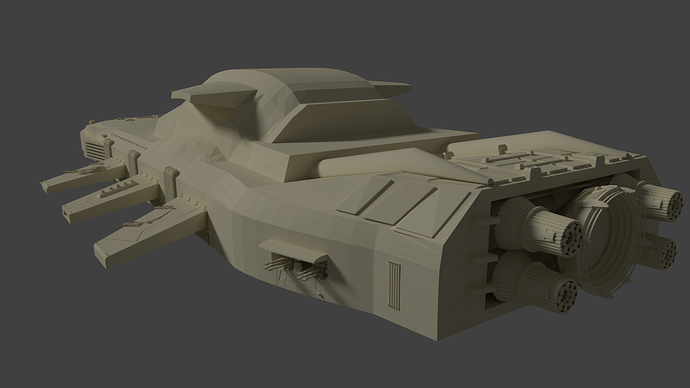 Those upper wings look a heck of a lot better! And those engines are really nice too. You’ve got some talent for this =)

Only thing I might change is the shape of the recess the engines fit into so that it isn’t square just to break up the long straight lines. Other than that, I can’t think of anything else. Can’t wait to see this thing textured and launching fighters!