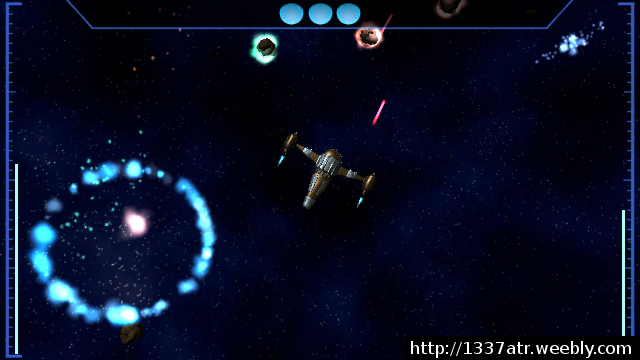 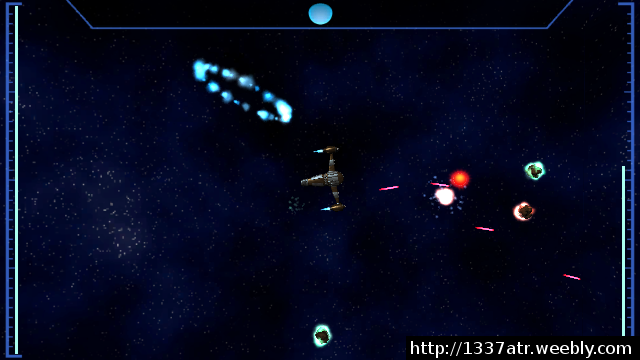 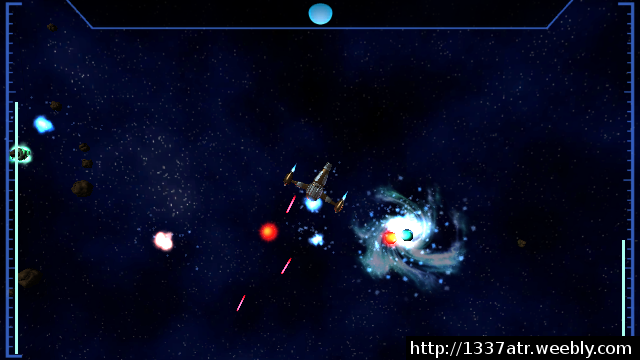 Space Rocks is an old school space shooter inspired by the Atari classic Asteroids. Models, textures and GUI elements were created with Blender and imported into Unity 3D for final game creation. Space Rocks is available for free directly on my website: http://1337atr.weebly.com/spacerocks.html

The Unity web player is compatible with both PC and Mac, however; I might release a standalone version that I’ve heard should run under Linux using Wine if there is enough interest.

To be honest I’ll probably make a standalone version available either way, just have to get around to making an icon :o

Hmmm… I guess nobody likes it? Or maybe you’re all still at my site playing it

It didn’t work on my pc… (windows, chrome)

You should make a stand alone version, It will run quite well on wine.

Could you be more specific about it not working? I’ll probably get a standalone version up later this week.

Just updated the game to version 1.1. It now has more particles, the black holes spin and I fixed a bug that improperly reported the game as being 100% downloaded when it was actually not entirely downloaded.

It’s actually quite fun and certainly looks great!
There are just some minor things that I find a bit annoying.
First of all the spaceship turns way to slow to the right/left which makes me feel like I control a tank or something.
As it’s an arcade-styled game there’s no need to hold on realism and the laws of physics

Also I think that shooting with just one laser instead of two would be a bit more precise, maybe also increase the fire ratio?
And the asteroids are too small overall - It would also be nice if you could acutally zoom out even further to get a better overview over the game.
On a last note - I don’t like the music - but that’s just my very personal opinion

The graphics look really nice - good job on that.
And I really like the particle effects!
Overall it could need some gameplay improvement, but I’d give it a 6.5 out of 10 atm.

I like it, and I like the physics, you just have to add bigger asteroids and a zoom out option.

There is one thing I don’t like, the ship turns as if it’s coordenate origin was behind it (I don’t know if you’ll understand me).

@mills: There is already a zoom ± option, it’s not listed in the in-game key, but in the text instructions beneath the game area. You can zoom in with ‘]’ and out with ‘[’ or using the mouse wheel. I know what you mean regarding the ships turning, it currently turns around it’s center which looks slightly strange since the front is larger than the rear. I’ll run some tests with the craft rotating around the center of it’s wing area to see how it looks. I’ll also test out some different turning speeds.

Edit: In regards to the size of the asteroids. Currently their scale is randomized upon generation and if they are big enough they split into two asteroids each half the size of the original. I’ll probably allow for larger asteroids to be generated, but I personally like having the smaller ones around. Bear in mind that the smaller asteroids that are harder to see do significantly less damage than the larger ones.

thanks for the ability to play your test subjects. Will this game eventually turn commercial

thanks for the ability to play your test subjects. Will this game eventually turn commercial

No this will not turn commercial. This is just something I did over the last week for fun. I thought people might enjoy it.

darn. Blender needs more commercial games. You should figure out how to make an app out of it and sell the app

I would buy it :D…especially if you can buy upgrades to weapons and stuff ;D

Well I’m glad that you enjoyed the game and thanks for the advice, but I’ll probably pass on the making an app out of it idea.

ok thanks for listening

atr1337: I can’t play the game for some reason, but it looks really cool!
Evil Moon MOose: I’m currently working on a commercial game you might be interested in. I plan on having a small demo complete by the end of the week.

@Gallus: Would you be able to offer a few specifics about what’s not working? Is the game not loading at all, can you not install the web player…

Very cool game. needs weapon upgrades and things like that though.

You know I thought about adding in more powerups, for speed and weapon upgrades, just haven’t gotten around to it. From a creators standpoint one of the great things about this game is how incredibly simple it is. It’d be quite easy for me to go in and add a few more upgrades when I’m bored some day. Probably won’t do it today or tomorrow, but I’m sure I’ll get around to it eventually.

Win/Mac standalone versions are now available from the Games page on my website.

I have not been able to test the Mac version, nor have I tested the Win version under Linux running Wine so if anyone is having trouble I’m happy to hear about it.